India and Pakistan seem to be on the same page as far as the Tablighi Jamaat congregation is concerned. Like in India, after the Nizamuddin Markaz congregation, in Pakistan also, the group is considered as one of the two major sources of the spread of the novel coronavirus. 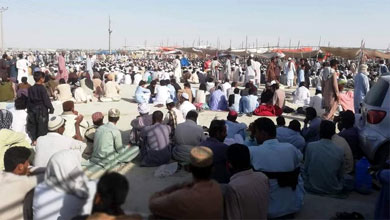 Many of the 2,000 people that attended the Tablighi Jamaat meeting in Delhi went back to different parts of the country. The Indian government now says that they are spreading the coronavirus in India.

As many as 250,000 people gathered in Pakistan’s Punjab, mid-March to participate in the annual five-day event or Tablighi ijtima. This is where people, mainly subscribing to the Deobandi sect get together to pray and obtain further training in proselytising. Pakistan is predominantly Barelvi. But the Tablighi Jamaat, which was formed in India in 1926, and its congregations are very popular and powerful for two reasons. First, theoretically, it cuts across sects and thus attracts people from all ideological schools, particularly the Barelvis who have no powerful religious forum of their own. Although Maulana Tahir-ul-Qadri’s Minhajul Quran, or politically, the Tehreek-e-Labbaik Pakistan are Barelvi organisations, the Tablighi Jamaat continues to attract Muslims across the board. Even Nawaz Sharif as chief minister of Punjab and later as prime minister supported their gatherings. This is because they are generally viewed as benign.

Second, because of its focus primarily on proselytising, it is popular across the socio-economic classes. From powerful institutions of the state and prominent politicians to the middle and lower middle classes, people are attracted to it for its religious teachings.

Although it is accused of links with extremist institutions, in Pakistan’s case, militant organisations such as the Jaish-e-Mohammed do not like the Tablighi Jamaat. This is mainly because Jaish-e-Mohammed has an aversion to any institution that does not encourage jihad. However, it is also a fact that a lot of jihadis from the Deobandi sect were initially inspired to join militant organisations because of the introduction to religion by the Tablighi Jamaat.

Perhaps, this is one of the reasons that the son of (late) Lt General Hameed Gul, known for his contacts with jihadis in Pakistan and Afghanistan, Abdullah Gul was sharp in criticising the media for blaming the Tablighi Jamaat as one of the major sources of coronavirus infection in Pakistan. He said, “Media is constantly spewing venom against Tablighi Jamaat, which is hurting sentiments of millions of people…all those religion-weary news anchors, producers, and all news directors should be fined heavily for such irresponsible behaviour.”

His gripe was that it was the Shia devotees who were responsible for most of the infection.

The problem lies in the structure of the Tablighi Jamaat forum that is based on gathering people from within the country and around the world. Even before the annual get-together in Raiwind, Lahore, teams of proselytisers are dispatched all over the world and inside the country. As per the Tablighi Jamaat system, every team stays in a mosque in the areas they travel to and conduct proselytising activities from there. These tours take place throughout the year. But the annual gathering happens in Lahore.

But does one blame the Tablighi Jamaat for this faux pas or the Punjab government, which was extremely slow in responding to the crisis? The federal government did not behave very differently from its counterparts around the world who took so long in responding to the threat. There still continues to be confusion regarding the lockdown as Prime Minister Imran Khan insists that it is a bad idea.

The Punjab government was neither forceful nor clear in its instructions. This lax attitude was one of the reasons why, as sources said, the  Tablighi Jamaat management instructed those of its teams that were yet to finish their tour of duty (the source I spoke to had completed his and had spent four months in the field – from December to March) to go to other places around the country and finish their work.

The Tablighi Jamaat members I spoke with boasted about how well they were organised in Raiwind.  After the orders to close shops, there was a separate Tablighi Jamaat office to guide each group on their future course of action. This meant that many of those, who were already exposed to members from countries affected by Covid-19 such as China, Iran, the UK, the US, Spain and others, then moved to other parts in Pakistan carrying the virus with them.

In Sindh, the inspector-general of police Mushtaq Mehr announced a quarantine of all Tablighi Jamaat returnees in his province, especially those sitting in mosques. They would be provided with food and other rations with instructions to the police to ensure that no other person came in contact with them. This meant an end to all preaching activities. This was deemed important after over 130 cases tested positive in the city of Hyderabad. Punjab or Islamabad, on the other hand, have not taken any similar action. While the neighbourhood of Bara Kahu in Islamabad is strictly quarantined as some returning Tablighi Jamaat members tested positive, many of the mosques in smaller towns and rural areas of Punjab with Tablighi Jamaat members sitting inside are reportedly still in action.

In many ways, Islamabad and its satellite government in Lahore are even bigger culprits than the Tablighi Jamaat. While Imran Khan remains totally engrossed in his electoral mode by pretending not to hurt sentiments of the religious Right, it is important for him to realise that what he and the world face is an unprecedented turn of events. Religion, though important, cannot be left on its own without any rational guidance. After all, both Iran and Saudi Arabia – the two central hubs of Islamic faith – have ventured to rationalise. Iran stopped Friday prayer gatherings and Saudi Arabia has sealed mosques and even put pilgrimages on hold.

What is required is a firmer but well-thought-out plan of action, especially in Pakistan and India where religion is not simply about faith or culture but is also central to politics and identity of people. Convincing one segment of population becomes tough, especially if the government is seen as partisan.

Closing down Tablighi Jamaat spaces in India, in particular, would require applying rationality to all. Apparently, days after the Tablighi Jamaat gathering at Nizamuddin, there was a large get together at the Shirdi Saibaba temple in Maharashtra. It is the application of greater scientific methodology that will help in survival against this present and clear danger.

Original Headline: Like India, Pakistan has a Tablighi Jamaat Covid-19 problem too. But blame Imran Khan as well