Pakistan’s only Nobel laureate helped develop the theoretical framework that led to the apparent discovery of the subatomic “God particle” last week, yet his legacy has been largely scorned in his homeland because of his religious affiliation. 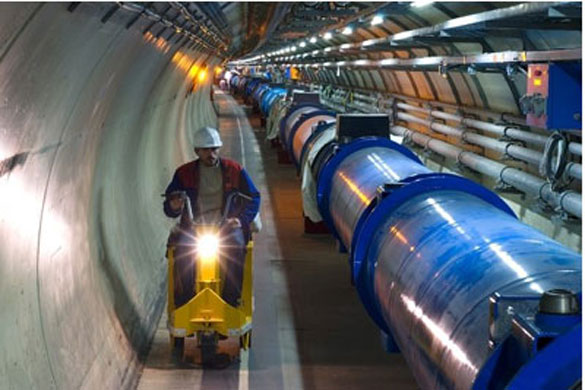 Inside CERN, A look at the Large Hadron Collider, AP

It’s a sign of the growing Islamic extremism in his country.

Adbus Salam, who died in 1996, was once hailed as a national hero for his pioneering work in physics and work that guided the early stages of Pakistan’s nuclear program. Now his name is even stricken from school textbooks because he was a member of the Ahmadi sect that has been persecuted by the government and targeted by Taliban militants, who view them as heretics.

Their plight — along with that of Pakistan’s other religious minorities, such as Shiite Muslims, Christians and Hindus — has deepened in recent years as hard-line interpretations of Islam have gained ground and militants have stepped up attacks against groups they oppose. The majority of Pakistan’s citizens are Sunni Muslims.

Salam, a child prodigy born in 1926 in what was to become Pakistan after the partition of British-controlled India, won more than a dozen international prizes and honors. In 1979, he was co-winner of the Nobel Prize for his work on the so-called Standard Model of particle physics, which theorizes how fundamental forces govern the overall dynamics of the universe.

Salam and Steven Weinberg, with whom he shared the Nobel Prize, independently predicted the existence of a subatomic particle now called the Higgs boson, named after a British physicist who theorized that it endowed other particles with mass, said Pervez Hoodbhoy, a Pakistani physicist who once worked with Salam. It is also known as the “God particle” because its existence is vitally important toward understanding the early evolution of the universe.

Physicists in Switzerland stoked worldwide excitement Wednesday when they announced they have all but proven the particle’s existence. This was done using the world’s largest atom smasher at the European Organization for Nuclear Research, or CERN, near Geneva.

“This would be a great vindication of Salam’s work and the Standard Model as a whole,” said Khurshid Hasanain, chairman of the physics department at Quaid-i-Azam University in Islamabad.

In the 1960s and early 1970s, Salam wielded significant influence in Pakistan as the chief scientific adviser to the president, helping to set up the country’s space agency and institute for nuclear science and technology. Salam also assisted in the early stages of Pakistan’s effort to build a nuclear bomb, which it eventually tested in 1998.

Salam’s life, along with the fate of the 3 million other Ahmadis in Pakistan, drastically changed in 1974 when parliament amended the constitution to declare that members of the sect were not considered Muslims under Pakistani law.

Ahmadis believe their spiritual leader, Hadrat Mirza Ghulam Ahmad, who died in 1908, was a prophet of God — a position rejected by the government in response to a mass movement led by Pakistan’s major Islamic parties. Islam considers Muhammad the last prophet and those who subsequently declared themselves prophets as heretics.

All Pakistani passport applicants must sign a section saying the Ahmadi faith’s founder was an “impostor” and his followers are “non-Muslims.” Ahmadis are prevented by law in Pakistan to “pose” as Muslims, declare their faith publicly, call their places of worship mosques or perform the Muslim call to prayer. They can be punished with prison and even death.

Salam resigned from his government post in protest following the 1974 constitutional amendment and eventually moved to Europe to pursue his work. In Italy, he created a center for theoretical physics to help physicists from the developing world.

The Washington Post’s Brian Vastag explains the importance of finding the ‘God particle,’ or as scientists prefer, the Higgs boson particle.

Although Pakistan’s then-president, Gen. Zia ul-Haq, presented Salam with Pakistan’s highest civilian honor after he won the Nobel Prize, the general response in the country was muted. The physicist was celebrated more enthusiastically by other nations, including Pakistan’s archenemy, India.

Despite his achievements, Salam’s name appears in few textbooks and is rarely mentioned by Pakistani leaders or the media. By contrast, fellow Pakistani physicist A.Q. Khan, who played a key role in developing the country’s nuclear bomb and later confessed to spreading nuclear technology to Iran, North Korea and Libya, is considered a national hero. Khan is a Muslim.

Officials at Quaid-i-Azam University had to cancel plans for Salam to lecture about his Nobel-winning theory when Islamist student activists threatened to break the physicist’s legs, said his colleague Hoodbhoy.

“The way he has been treated is such a tragedy,” said Hoodbhoy. “He went from someone who was revered in Pakistan, a national celebrity, to someone who could not set foot in Pakistan. If he came, he would be insulted and could be hurt or even killed.”

The president who honoured Salam would later go on to intensify persecution of Ahmadis.

Salam was targeted even after his death. His body was returned to Pakistan in 1996 after he died in Oxford, England, and was buried under a gravestone that read “First Muslim Nobel Laureate,” but a local magistrate ordered the word “Muslim” to be erased, said Hoodbhoy.

Since Salam’s death, life has become even more precarious for Ahmadis in Pakistan. Taliban militants attacked two mosques packed with Ahmadis in Lahore in 2010, killing at least 80 people.

“Many Ahmadis have received letters from fundamentalists since the 2010 attacks threatening to target them again, and the government isn’t doing anything,” said Qamar Suleiman, a spokesman for the Ahmadi community.