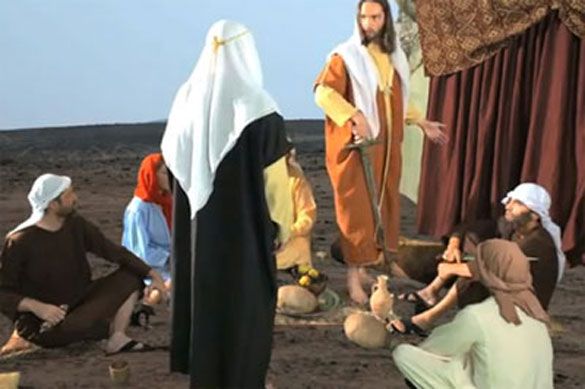 Photo: A film still from "The Innocence of Muslims."

Imagine a Monty Python film reworked by an intern fired from The Onion and then shot by a failed Bollywood director, and you've got The Innocence of Muslims, a comically bad anti-Islam film.

However, the response of some Muslims to the film—which went viral over the last two days—is no joke. It sparked heated riots in Egypt, Libya, and elsewhere, and may have led to the tragic attack on the U.S. Consulate in Benghazi that killed four Americans on Tuesday. (Some reports have also said the attack may have been planned in advance by a terrorist group.)

Either way, we are witnessing a hyperbolic, emotional, and irrational response to a religious slur, spurred on by certain Muslim clerics and leaders with a political agenda to paint the West as an enemy of Islam. There is a far better thing for Muslims to do about a ludicrous film such as The Innocence of Muslims: Chill out.

No doubt, this film promotes a point of view that is insulting. In a trailer that lasts a painful 13 minutes and 50 seconds, a fiery modern-day mob of bearded Muslims in turbans attacks Christians. Then the film goes back in time to the birth of Islam in the 7th century, depicting the religion's prophet, Muhammad, as a crazed lunatic, a sex fiend, and a bloodthirsty leader. It ends with a blood-streaked Muhammad, looking devilishly into the camera as an image of flames bursts across the screen. He waves a sword through the air, his eyes maniacal, narrowed, and angry. The film borrows the worst elements from Bollywood. It's ridiculously bad.

According to a report in The Washington Post, the film was directed by a California real estate developer who goes by the name Sam Bacile, possibly a pseudonym. He has reportedly gone into hiding following the riots in Libya and Egypt. Actors in the film have said they were duped and didn't know it was an anti-Muslim film.

Sure, the film makes a mockery of Islam. But too many Muslims took this awful film seriously.

In Afghanistan, President Hamid Karzai issued this inflammatory statement: “The office of the president of the Islamic Republic of Afghanistan strongly and resolutely denounces this desecrating act and declares its serious abhorrence in the face of such an insult. Prophet Mohammed … was the greatest prophet of Islam, a prophet sent to guide mankind, a pacifist and a promoter of truth and honesty in the universe. In fact, insult to the greatest Prophet of Islam means insult to high values of 1.5 billion Muslims across the world. This offensive act has stoked interfaith enmity and confrontation and badly impacted the peaceful coexistence between human beings.”

In Gaza City, supporters of the Popular Resistance Committees, a militant group aligned with the ruling Hamas movement, reportedly burned American flags and chanted, “Shame on everyone who insults the prophet.”

In Tunisia, police fired teargas into protestors who shouted, “Muhammad is the master of creation.”

As a Muslim myself, I think many of us are far too sensitive about slurs against our religion. I believe it comes from a place of insecurity. We have to stop letting religious insults rule our emotions and behaviour. And our leaders need to set the precedent. We have a failure of leadership in our Muslim communities, leading us down the drain, rather than inspiring us to rise to our higher selves.

In recent years, this has been illustrated by the publication of Satanic Verses, the Salman Rushdie novel about a fictious Quranic verse that led Muslim clerics in Iran to issue a fatwa, or religious ruling, calling for the death of the author. Later, Muslim leaders stoked riots in the Middle East about Danish cartoons that depicted Muhammad with a bomb in his turban. In Sudan, schoolchildren named a teddy bear “Muhammad,” and clerics saw that as an insult, calling for the children's teacher to be executed. (She was arrested and charged with insulting Islam, but, amid international outcry, she was eventually pardoned.)

This year, violent crowds took to the streets in Afghanistan to protest the burning of Qurans at the Bagram Air Base by U.S. military personnel. The U.S. said it was disposing of Qurans that Taliban prisoners had used to write messages to each other. An ill-advised means of disposal, to be sure. But the riots resulted in the senseless deaths of about 30 Afghans and six U.S. servicemen.

Thankfully, American Muslim organizations are responding responsibly to the tragedy in Libya, calmly condemning the attack in press releases and at press conferences. The Muslim Public Affairs Council issued a statement titled, “MPAC Condemns Attacks on U.S. Embassies, Calls for Protection of All Personnel.” The Islamic Council of North America sent out an email with the headline, “ICNA Condemns Attacks on U.S. Missions, Appeals for Calm and Caution.” Leaders of a number of Muslim civil-rights groups, including the Muslim American Society and the Council on American Islamic Relations, also condemned the attack at a press conference in Washington, D.C

Usually the press statements of these organizations are filled with grievances about "Islamophobia," creating a sense of anger and victimhood inside the Muslim community. These organizations largely ignore the complaints of Muslim women against sexism and intolerance in the community, but they readily go after titans of corporate America, such as Lowe's, for perceived anti-Muslim slights. (Lowe’s had pulled its ads from a struggling TLC show, All-American Muslims.)

What happened in Benghazi is a brutal, terrible tragedy. Rioting and murderous Muslims only prove correct the detractors who say Islam is a religion of violence. The rest of us have to let common sense prevail. Muslim leaders should take it upon themselves to spread that sense, not let slurs guide them to fury. The film should get a thumbs-down. That’s all.