Islam, Women and Humanitarian Ethics Are in for Abuse by the Taliban Terrorists in Afghanistan and Other Militant Groups Elsewhere

1.    Terrorist organisations like Afghan Taliban, Pakistan Taliban, ISIS, Al-Qaeda and Boko Haram talk of establishing an Islamic State but seem to be unaware of even the basics of Islam.

2.    Terrorists have formed a mentality that resembles the mentality of the days of Jahiliya.

3.    Terrorists’ attitudes towards women should be a subject of research to find out the reasons and cure for their brutal attitude towards them.

4.    Taliban’s coup over Afghanistan is not the victory of the terrorists against a particular country but it is a defeat of our humane approach towards our fellow beings.

5.    Freedom of every aspect of life was abused by the Taliban in their previous rule in Afghanistan in the name of Islamic Ethics. 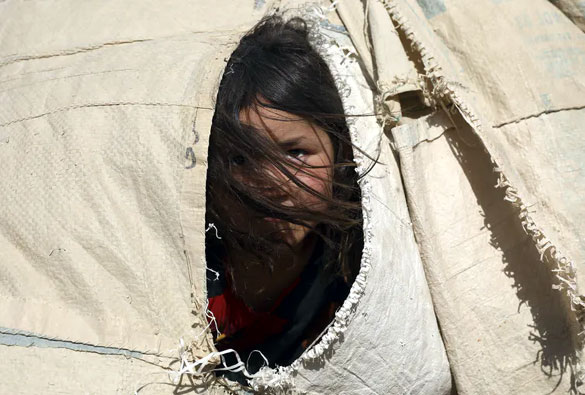 Photo Caption:  A displaced Afghan girl peers from her makeshift tent at a camp in northern Afghanistan in July 2021. (AP Photo/Rahmat Gul)

There is a psychological trait behind every extreme action of a human being. It can be an aura of self- supremacist ideology that can create an animal-like attitude of forcing one's one-sided belief on others. Terrorists’ attitudes towards women should be a subject of research to find out the reasons and cure for their brutal attitude towards them. Their brutal and heinous behaviour with women demands the immediate attention of world organisations. They, Taliban and ISIS, are certainly not more powerful than the united world societies working for human rights established in the society.

Taliban Ideology Uncalled for and Un-Islamic

Taliban propagate their self-doctrine ideology that does not match that of the Islamic ideology prescribed in the Holy Quran and propagated by Prophet Muhammad Pbuh. Terrorists have formed a mentality that resembles the mentality of the days of Jahiliya. Islam is the most modern religion. It is Islam on which Allah has completed His Deen. Islamic ideology is a mixture of piety, human rights and pluralism. It is one of the most socially relevant ideologies. Terrorist organisations like Afghan Taliban, Pakistan Taliban, ISIS, Al-Qaeda and Boko Haram talk of establishing an Islamic State but seem to be unaware of even the basics of Islam.

Islam is a religious ideology that bestows upon all human beings the right to live. All of us have been blessed with freedom of expression, freedom of religious belief by Allah the Most Gracious. Allah the Almighty has bestowed upon His creation every kind of humane right that translates into a life free of all bondage. Allah has blessed humanity with the power of understanding the good and the bad and to decide the way of his life. Allah says in the Holy Quran that no one will be held responsible for anyone on the Day of Judgment. Allah the Most Compassionate has declared what is piety and what is worship and how to follow the guidelines of Islam for a better life hereafter. Consider the following Quranic verses depicting the above-mentioned rights of the believers:

“By the Soul, and the proportion and order given to it. And its enlightenment as to its wrong and it's right. Truly he succeeds that purifies it. And he fails that corrupts it.” - (Al-Shams: 7-10)

As the above-mentioned verses fix the parameters of everybody’s dos and don’ts, the Taliban’s fixing their parameters, which is against the spirit of the Quranic Ayat is all but Islamic. Taliban are self-styled guardians of Islam. Their language, their behaviour with the believers and their way of life raises eyebrows and does nothing except creating Islamophobia and hatred for its believers. Their brutal ideology is not compatible with that of the Islamic ethe. 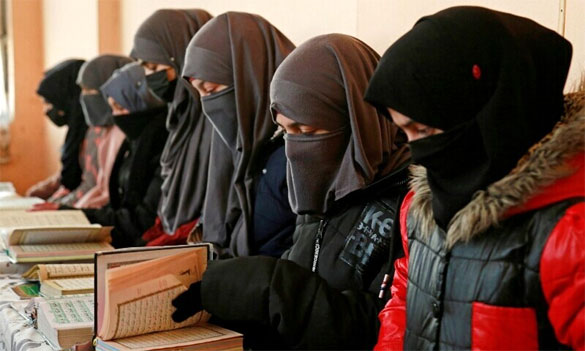 A scene from Afghanistan’s “Palwasha” TV series, which draws attention to the issue of violence against women. (U.N. Photo / Jawad Jalali)

Consider the following diktats of the previous Taliban regime in Afghanistan:

From the age of eight onward, girls in Afghanistan were not allowed to be in direct contact with males other than a close "blood relative", husband, or in-law (Mahram). Other restrictions for women were:

1.       Women should not appear in the streets without a blood relative or without wearing a Burqa.

2.       Women should not wear high-heeled shoes as no man should hear a woman's footsteps lest it excites him.

3.       Women must not speak loudly in public as no stranger should hear a woman's voice.

4.       All ground and first-floor residential windows should be painted over or screened to prevent women from being visible from the street.

5.       Photographing, filming and displaying pictures of females in newspapers, books, shops or the home was banned.

6.       The modification of any place names that included the word "women". For example, "women's garden" was renamed "spring garden".

7.       Women were forbidden to appear on the balconies of their apartments or houses.

8.       Ban on women's presence on radio, television or at public gatherings of any kind.

(Treatment of women by the Taliban/From Wikipedia, the free encyclopaedia)

The above mentioned inhuman diktats of the previous Taliban regime in Afghanistan are against the humane ethics of Islam, the religion they propagate. The Taliban and its ilk who are against the equal rights of girls against men must not ignore the guidance of the Holy Quran and the Prophetic traditions, as it says:

When one of them gets a baby girl, his face becomes darkened with overwhelming grief. Ashamed, he hides from the people, because of the bad news given to him. He even ponders: Should he keep the baby grudgingly or bury her in dust? Miserable indeed is their judgement.” (An-Nahl — 58-59)

“Do not hate having daughters, for they are the comforting dears.” (Al-Tabarani)

“Whoever has three daughters, and cares for them, is merciful to them, and clothes them, then paradise is certain for him.” (Jabir ibn Abdullah)

“Acquisition of knowledge is binding on all Muslims, male and female… The person who goes forth in search of knowledge is striving hard in the way of Allah, until his/her return.”

Strange are the ways of the terrorists that they look another side of the religion, they say they are following. Islam is a way of life and life without education and equal participation of women in day to day life is impossible. They will understand these things but only after they will ruin not the life of the believers but the religion itself in the eyes of the Islam bashers.

Taliban’s coup over Afghanistan is not the victory of the terrorists against a particular country but it is a defeat of our humane approach towards our fellow beings. National boundaries are a concern when it comes to managing humanitarian ethics against the rampaging social evils of terrorists or the fascist regimes against their people. When it comes to the safety of humane ethics international borders should not come between the respect of human rights and terrorists or fascists. If it is a big issue at least the establishment of human rights of women and children must be given the uppermost priority at the international forums and nothing should come in between the safeguarding of the rights of the weaker sections of the world society and the abusers of humanity.

The intention of the humanitarian organisations is not under doubt. But, we have been witness to the fact that intentions do not matter in the face of actions. What is needed, therefore, is besides good intentions result-oriented actions are also needed.  International forums working for the establishment of humanitarian ethics will do better to take action before the Taliban coup in Afghanistan again takes all the humane norms to the wind. International organisations are empowered by various conventions and resolutions accepted on various forums, such as:

Article 27 of the Geneva Convention (IV) relative to the Protection of Civilian Persons in Time of War. Geneva, 12 August 1949, states:

“Women must be especially protected against any attack on their honour, in particular against rape, enforced prostitution, or any other form of indecent assault.”

In June 2020, Human Rights Watch in a report titled “You Have No Right to Complain” noted:

“While in power in Afghanistan in the 1990s, the Taliban’s rights record was characterized by systematic violations against women and girls; cruel corporal punishments, including executions; and extreme suppression of freedom of religion, expression, and education.”

The Organisation of Islamic Cooperation’s 1990 Cairo Declaration on Human Rights in Islam states:

“Fundamental rights and universal freedoms (…) are an integral part of the Islamic religion” and that “all the rights and freedoms stipulated in this Declaration are subject to the Islamic Shari’ah.”

All the three abovementioned international undertakings grant sufficient rightful power to the international humanitarian forums to safeguard women of Afghanistan, Pakistan and of any other such countries where women are subjected to inhuman acts.

The thoughts of the previous Taliban regime’s brutality subjected on women, children and men in Afghanistan send a chilling effect down the spine. Humanitarian ethics of every sphere of human life of women, children and men were torn to shreds during their previous regime in Afghanistan. Freedom of every aspect of life was abused by the Taliban in their previous rule in Afghanistan in the name of Islamic Ethics. It is time, therefore, for the world society to come together and fight those who are destroying the thread of humanity. It is not a fight against any religion, it is a fight against the inhuman beings, threatening to abuse humanity, at large.

The developed nations coming to rebuild the devastated nations is the norm nowadays. And it also is a sign of being superior in human ethics. But coming to the rescue of the countries when these are being devastated by the terrorist organisations, by the authoritarian regimes is out of fashion. Truly democratic countries must come to the rescue of all the countries like Pakistan, Syria, Iraq, Afghanistan, almost all the African countries before these are ruined by the sectarian and terrorist conflicts and their people become refugees, fed on the mercies and charities of others. People of war-torn countries lose their self-respect and self-esteem and are almost doomed forever. Psychologically speaking people fed on the mercies of others are unable to stand their feet. They are a big loss to the human race. Humanity loses its bright face in the face of the brutalities the war-torn people face.