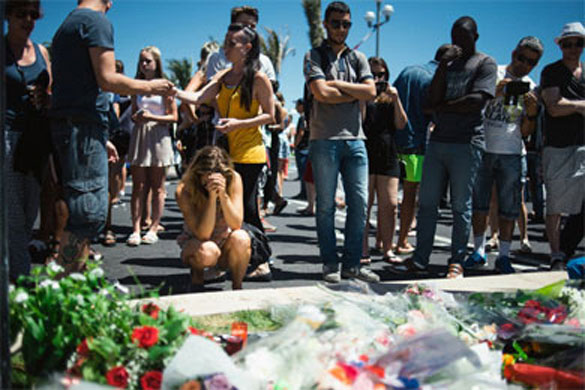 People brought flowers on Friday to the site of the previous night’s attack in Nice, France. Credit Dmitry Kostyukov for The New York Times

He lived on the 12th floor of a high rise in a heavily immigrant housing project and was known to his neighbours only as a moody and aggressive oddball. He never went to the local mosque, often grunted in response to greetings of “bonjour” and sometimes beat his wife — until she threw him out.

The French authorities had much the same view of the man, Mohamed Lahouaiej Bouhlel, a heavyset 31-year-old from Tunisia — definitely trouble but not a grave menace to the security of the nation.

At 10:45 on Thursday evening, however, Mr. Bouhlel was starting an attack that would stun and horrify his old neighbours, the French security forces and much of the world: stepping on the accelerator of a 19-ton refrigerated truck he had rented, he turned the vehicle into a highly efficient instrument of mass murder.

Zigzagging so as to hit as many people as possible as the vehicle careered down the Promenade des Anglais, alongside the Mediterranean, Mr. Bouhlel transformed the celebrated French Riviera boulevard, crammed with people who had just watched a fireworks show celebrating Bastille Day, into a vast tableau of carnage and panic.

By the end of his murderous drive, when he was shot to death by the police, 84 lifeless bodies were left scattered behind him and scores of others lay gravely wounded.

“We were all like zombies, just running and screaming,” recalled Alexia Carbonne, a 20-year-old who had gone out Thursday evening with a girlfriend to watch the fireworks.

Among the victims were two German students and their teacher; two Americans; two Tunisians, and one Russian. Of the 202 people wounded, 52 had serious injuries and 25 were in intensive care, Mr. Molins said.

His rampage-by-truck, the third large-scale act of terrorism in France in a year and a half, highlighted the difficulties of guarding against unconventional attacks.

Yet it also left the French government facing uncomfortable questions about whether it had provided sufficient security in Nice even as it urged citizens to recognize that the terrorist threat would not be eradicated quickly or easily.

“I want to tell my fellow countrymen that we will win this war, but that we might be faced with new retaliations, that there will probably be more innocent victims,” said Prime Minister Manuel Valls.

Mr. Bouhlel appeared not to have left behind any public declaration of his motive or indicated any allegiance to the Islamic State or another extremist group. Unusually for an attack of this scale and nature, no group claimed responsibility.

Survivors of the attack in Nice, France, describe a windy night at the beach, fireworks, and then terror.

He had a history of petty crime, including a six-month suspended sentence for assaulting a motorist last year. But he was never flagged as a potential jihadist radical and, Mr. Molins said, he was “completely unknown by intelligence services, both at the national and local levels.”

The lawyer who defended Mr. Bouhlel in last year’s assault case, Corentin Delobel, described his former client as “a classic delinquent” in an interview with France’s BFM televisions news channel.

Still, French officials labelled the attack terrorism and cast the episode as the latest in a series that have made France a battlefield in the violent clash between Islamic extremists and the West.

The tool he chose for his attack, a speeding vehicle, also fits with a 2014 exhortation by Abu Muhammad al-Adnani, the spokesman for the Islamic State, to would-be jihadists who wanted to kill French or American citizens but did not have any bombs to hand.

“Smash his head with a rock or slaughter him with a knife or run him over with your car,” Mr. Adnani advised.

Mr. Valls said the attacker in all likelihood had ties to radical Islamist circles.

“He is a terrorist probably linked to radical Islam one way or another,” Mr. Valls told France 2 television.

“We have an individual who was not at all known by the intelligence services for activities linked to radical Islamism,” Mr. Cazeneuve said, noting that he was not in any French intelligence databases for those suspected of radicalization.

He said that the ongoing investigation would determine whether the suspect had acted alone, possibly because of he was psychologically “unbalanced,” or whether he was linked to a terrorist network.

Residents in his former apartment building on a hill overlooking the city said they had never seen him at the local mosque and never heard him mention religion.

Indeed, they said he rarely spoke at all and seemed to be in a permanent haze of anger, particularly after his marriage fell apart.

Samir Boufet, an 18-year-old resident in the building, remembered him as a “big guy who clearly had lots of problems. He never spoke with anyone.”

A friend of Mr. Boufet’s, who gave his name as Walid Ben, said Mr. Bouhlel had a reputation in the neighbourhood as a wife beater and always seemed in a foul mood.

The French police on Thursday raided two locations in Nice looking for clues to his motivations and possible links to extremist groups. One was the 13-floor apartment building where Mr. Bouhlal had lived with his wife and three children.

The other was a small apartment in the east of Nice — near the city’s former slaughterhouse — to which he moved about a year ago after his wife demanded they live separately.

Near the second residence, forensic experts in chemical hazard suits clambered in and out of a truck parked by the side of the road. Painted on its back was the address of a showroom in St.-Laurent-du-Var, a town adjacent to the Nice airport.

Local residents said the truck had been used by Mr. Bouhlel for his work as a delivery man at the showroom.

But the manager there, John Neto, said the terrorist had never worked for him and that the truck was used by an entirely different man whom he declined to name.

Mr. Bouhlel rented the refrigerated truck he deployed as a killing machine on Monday at a rental company just down the road from the showroom.

A female manager on duty at the company said Friday he had provided all the required documents, including a special permit allowing him to use a heavy vehicle.

The woman, who declined to give her name, said that Mr. Bouhlel had aroused no suspicions.

But she said she had grown increasingly worried that her truck was being used as a weapon while watching television reports of Thursday evening of the scene on the Promenade des Anglais.

She then got a call from the police asking her to give information about who had rented the truck and how.

At 9:34 p.m. on Thursday, according to surveillance footage, Mr. Bouhlel arrived by bicycle to collect the rented truck and then drove it into the centre of Nice, arriving at 10:30 p.m. in the Magnan neighbourhood, just north of the Promenade des Anglais.

His deadly rampage began around 15 minutes later, when he drove the truck south and, after passing a children’s hospital where his young victims now lie, he then turned onto the promenade, which was packed with spectators watching the end of the Bastille Day fireworks.

Mr. Bouhlel initially ran over two people, including a middle-aged Muslim woman, on the sidewalk, and then continued driving for 1.1 miles eastward, running over people left and right as he swerved on and off the sidewalk.

Outside the Negresco Hotel, Mr. Bouhlel fired at three police officers; they returned fire, and then pursued Mr. Bouhlel for about 1,000 feet, until they shot and killed him outside a Hyatt hotel and casino.

He was found dead in the passenger seat. In the truck’s cab, police found an automatic 7.65-millimeter pistol, a cartridge clip, and several cartridges. They also found a fake automatic pistol; two fake assault rifles, a Kalashnikov and an M-16; a non-functioning grenade; and a mobile phone and documents.

On a visit to Nice, President François Hollande defended his government against mounting criticism that it had slipped up.

Praising security services, he said they had “taken all necessary measures so that this fireworks show might be as protected as possible — as had been the case during the European Championship soccer tournament.”

“Why Nice?” Mr. Hollande asked. “Because it is a city that is known worldwide, one of the most beautiful cities on the planet,” he said.

“Why on the 14th of July? Because it is a celebration of freedom. It was, therefore, indeed to affect France that the individual committed this terrorist attack.”

Hours before the attack Thursday evening, Mr. Hollande had said that a state of emergency put in place after the Nov. 13 attacks in and around Paris would end soon.

The government will now seek to extend the state of emergency for three months.

It was a sadly familiar ritual for France, where a total of 147 people were killed in terrorist attacks in and around Paris in January and November of last year, and it raised new questions throughout the world about the ability of extremists to sow terror.

The internet reverberated with calls for prayer for victims of attacks in Brussels, Istanbul, Orlando, Fla., Baghdad and other cities struck by mass terrorism attributed to Islamist extremists this year.

Struck down at the height of the summer tourism season, Nice on Friday stumbled on as if in a daze, its normally crowded seaside restaurants and luxury hotels mostly closed as armed police officers blocked entry to much of the Promenade des Anglais, still littered in places with surgical gloves, bloody clothing, and other detritus of the previous night’s terror.

Late on Friday evening, a long caravan of police vehicles drove slowly down the promenade away from the city centre, leaving the wide, crescent-shaped boulevard open to pedestrians and cars once again. Makeshift memorials set up where Mr. Bouhlel’s victims had fallen drew groups of silent mourners and ever growing piles of white carnations.

“The horror, the horror has, once again, hit France,” Mr. Hollande told the nation early Friday morning before leaving for Nice.

“France has been struck on the day of her national holiday,” he said. “Human rights are denied by fanatics, and France is clearly their target.”