Bangladesh has seen an increase in terrorist activity in recent years, including attacks on foreigners, activists and religious minorities.

Perpetrators of these attacks have included people from privileged backgrounds. News reports indicate they were all motivated by the idea that Islam is under attack by secularists and must be defended.

This is significant in a country that was founded in 1971 on principles of secularism following an independence war with neighboring Pakistan.

My research on Islamist social movements has taken me to Bangladesh regularly for the past seven years. Over that time, I have found, conservative Islamic views have come to play a more central place in Bangladesh’s politics and society.

The Birth of Bangladesh

When the Indian subcontinent gained independence from the British Empire in 1947, it was partitioned into two states, creating Pakistan out of the Muslim-majority regions of British India. The newly formed Muslim country was split in two parts, West and East Pakistan, separated by the vast landmass of northern India.

While these two parts of Pakistan shared a common faith, Islam, there were significant cultural, linguistic and political differences between them. The population in the eastern region – predominantly ethnically Bengali and speaking their own language, Bangla – was politically marginalized by the western region.

In 1971, the people of East Pakistan launched a war for independence and founded the “Land of Bangla” – Bangladesh.

While language and culture was at the core of Bangladeshi national identity, most people still identified as religious. In other words, it was a secular country founded by people of faith. “Secularism” in Bangladesh did not imply absence of religion, but rather that the state be neutral toward religion.

Since then, my research shows, Islam has come to be a prominent political force in the country. 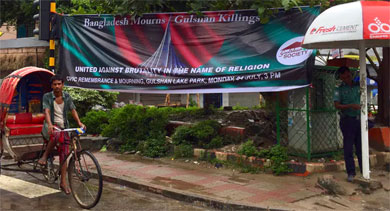 A banner put up by a local organization in the aftermath of a major terrorist attack in Dhaka in 2016, condemning killings in the name of religion. Anders C.

Islamists, a broad label that covers political parties, preachers and militant groups, among others, actively promote a more conservative version of Islam.

The most influential Islamist party is Jamaat-e-Islami, whose name means “Islamic gathering.” Though it has never won many parliamentary seats, Jamaat-e-Islami has come to exert considerable influence in government.

Bangladesh’s parliamentary system requires mainstream parties to ally with smaller ones to gain the majority necessary to form a government. Because of this, major political parties in Bangladesh have at different times relied on alliances with Jamaat to secure a parliamentary majority.

Other Islamists use “street power” to promote their agenda.

In February 2013, a high-ranking official with Jamaat-e-Islami received a life sentence for war crimes committed during the 1971 independence struggle. This was considered by some as too light a sentence. A few days later, protesters began rallying in the streets to demand the death penalty for this official. 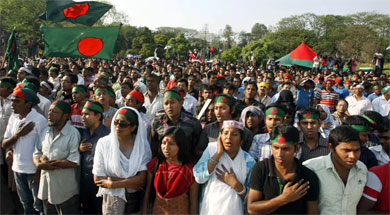 Moderate activists in Bangladesh protesting at a Dhaka intersection demanding harsh punishment for those accused of crimes during the 1971 independence war from Pakistan. AP Photo/Pavel Rahman

These secular-minded supporters of the war tribunal wanted local collaborators of the Pakistani army to be punished for atrocities they committed against Bengalis and religious minorities.

Most of those being tried by the tribunal came from the ranks of the Islamist party Jamaat-e-Islami.

The protesters wanted local collaborators of the Pakistani army to be punished for atrocities they committed against Bengalis and religious minorities. They demanded that Jamaat-e-Islami be banned and their financial interests, including Islamic banks, be dismantled.

This mobilization, however, was soon met with a coordinated counterprotest led by a movement known as Hefazat. As many as 500,000 people shut down major roads to the capital and interpreted the protesters demands as defaming Islam and the Prophet Muhammad.

In a 13-point list, the Hefazat demanded the death penalty for blasphemy. The group also asked for an end to Bangladesh’s education policy, which, in its view, prioritized “secular” subjects like science and math over religious studies. The group also wanted compulsory Islamic education.

To appease Islamist interests, the government agreed to meet some of the demands.

One major concession was expanding the government’s ability to crack down on those who “hurt religious beliefs” and for “acts of defamation.”

Under this revised law, called the Information and Communication Technology Act, Bangladesh has arrested at least eight bloggers since 2013. The alleged crimes of these bloggers include writing articles critical of the Saudi government and posting derogatory remarks about the Prophet Muhammed online.

Police have used the defamation clause of the Information and Communication Technology Act and its replacement, the Digital Security Act of 2018, to silence criticism of the government. Over 1,200 people have been charged under this law between 2013 and 2018.

Hefazat did not see all their demands met, but my research shows it moved Bangladesh away from its secularist ideals.

In truth, the shift in Islam’s role in politics and society really began as early as 1975 when Bangladesh’s founder and first president, Sheikh Mujibur Rahman, was assassinated in a military coup.

After that, Bangladesh experienced considerable political instability and was ruled by successive military governments until 1990, when a nonviolent mobilization ushered in a return to democracy.

During the dictatorship years, however, military rulers began to gradually open up politics to Islamists.

A ban on Islamist political parties was lifted in 1975, which allowed Jamaat-e-Islami to run candidates for office and establish itself as a legitimate Bangladeshi political party.

In 1979, the commitment to secularism was removed from the preamble of Bangladesh’s constitution. In 1988, Islam was made the official state religion.

The number of religious schools – madrasas – increased exponentially, from 1,830 in 1975 to 5,793 in 1990. And that’s just government-sanctioned Islamic schools following a state-approved curriculum.

Reliable data is missing for the vast majority of private madrasas in Bangladesh, which operate without any curricular control from the state.

In today’s Bangladesh there is another influential group: preachers who aspire to shape society according to their interpretations of what constitutes “pure” Islam.

Popular Islamic televangelists reach millions across the Muslim world, spreading the notion that Islam in the Indian subcontinent must be “purified” of non-Arab elements. They believe Arabic is God’s language and to be properly pure, Muslims should use Arab practices and the language whenever possible.

For example, Muslims in South Asia commonly say “Khuda Hafiz” when parting, a phrase derived from Persian, meaning “God be your protector.” Now, a popular Islamic televangelist, Zakir Naik, has revived an old argument that emerged in the 1980s in Pakistan, saying that “true Muslims” should use the Arabic version “Allah Hafiz” instead.

Similarly, as several Bangladeshis have told me, it is not uncommon in today’s Bangladesh to be corrected when using the Persian “Ramzan,” when referencing the Muslim holy month. The Arabic is “Ramadan.”

These may seem like minor semantic changes, but they are representative of a broader “corrective movement” that seeks to “purify” Islam of perceived “un-Islamic” tendencies.

In my view, Bangladesh’s secularism, a constitutional concept meant to guarantee the separation of religion and state has become so vilified by Islamists that it has come to mean something akin to “atheistic” or “anti-Islamic.”