After four decades of war and unrest, Afghanistan is on the verge of a new wave of violence and fear. It is the emergence of ISIS across the country that has the potential to recruit and spread as a threatening force to the existence of the Afghan government backed by over 9,800 US forces. Even Afghan Taliban insurgents led by Mullah Omar is facing a fundamental problem of how to react to a fast growing ISIS influence in the Middle east, Africa and now in the territories where Taliban traditionally are in power. 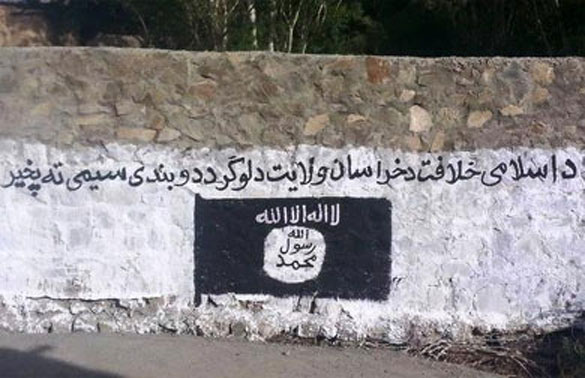 Although Taliban initially welcomed the formation of ISIS and its objectives, Taliban spokesperson highlighted its difference of objectives with ISIS. He mentioned that what the Taliban concentrate are national issues and these issues have no linkages to other countries but now ISIS does become a national issue given its expansion to Afghanistan as well as their opposition to Taliban movement.

Recent statements of ISIS branding Taliban as ISIS proxies and Taliban official statement against ISIS is a clear sign that neither side wants to work together. Fast growing ISIS has now a considerable presence in the districts of key strategic Nangarhar, Helmand, Ghazni, Farah and Logar provinces. In the districts of Helmand and Nangrahar, their military campaign has already begun to force Taliban members to either join them or face death.  Armed clashes between both groups have resulted hundreds of casualties.

Similar to Taliban leadership, ISIS has established a Caliphate and named their leader as Amir-ul-Momineen (leader of the faithful.) It, however, contradicts with the title of the Taliban supreme leader, Mullah Omar who obtained Amir-ul-Momineen title in a special gathering of over 1000 Islamic clerics in 1996. Even Al-Qaeda leaders Osama bin laden and Al-Zawahiri consecutively backed such decision and announced its commitment to support the Taliban regime in their war against, Afghan resistance groups called the Northern Alliance and subsequent to that, the US coalition and ISAF forces and the Afghan government. However, ISIS spokesperson said if Taliban would like to join the ISIS, the group should announce their allegiances to their Amir-ul-Momineen, Abu Baker Al-Baghdadi. According to Islamic thoughts, there should be only one Amir-ul-Momineen accepted by all in an Islamic world.

At current stage, ISIS is heavily busy with recruitment and has the potential advantage of recruitment over the Taliban. In an official statement, Hezb-i-Islami Gulbuddin asked its fighters to join the ISIS while labelling Taliban as their enemies. The resurgent militia of Hezb-i-Islami group led by a notorious warlord and former Afghan Prime Minister Gulbuddin Hekmatyar is one of the former Mujahideen Tanzim (parties.) Also, Taliban who are famous in asking and coercing Afghan locals for monetary and logistical assistance, ISIS is doing the opposite; it actually distributes money to garner the support of local population. Financial independency gives a tremendous edge to ISIS over the Taliban.

Taliban movement have traditionally focused its recruitment on disillusioned ethnic Pashtuns who were the primary target of the US coalition forces and Afghan security forces since the beginning of the US war on terror. Most of Pashtun people joined the Taliban for various reasons ranging from ideology, ill-treatment, injustice, corruption, tribal affiliation, poor economy, and foreign occupation. Simultaneously, their entire propaganda machine using printed publications, pirate radio broadcasts, social networking sites such as YouTube, Facebook and Twitter, text messaging, official spokesmen, their official website, independent websites in Pashto and Dari languages, graffiti, propaganda videos as well as local means such as using preachers (Imams) to call for jihad in order to penetrate certain villages, Juma Khutba (Friday sermons), poetry, Taranas (poetic chants,)Shabnamah (night-letters,) patrols and Zinzer (adhoc security posts)were to capitalize on the above reasons to further attract young Afghans into their frontlines.

This focused and intensive propaganda resulted the alliance of thousands of Afghans primarily from Afghan villages with Taliban group who have ferociously fought against the US led international forces and the Afghan government. However, after over a decade, Afghan Taliban failure producing tangible achievements, lack of financial resources, Afghan government information operation and recent events indicating Taliban leadership directly receiving support from Pakistani military establishment have weakened Taliban stance as a grass root independent movement who aim to liberate Afghanistan.

This situation provides the potential for ISIS growth in Afghanistan and Pakistan. Also, Afghan Taliban insurgent group failure to incorporate ethnicities other than Pashtuns is a significant advantage to ISIS. Afghanistan’s second largest ethnic population Tajik and third largest population Uzbek have long doubted Taliban insurgent intentions given Taliban massive atrocities when they were in power. ISIS which has apparently ties neither to AQ nor the Taliban serves as a better option to ultra-conservative population of other ethnicities, Unemployed youths, ideologically driven non Pashtun clerics, disenfranchised Jihadi commanders and fighters.

Given ISIS fast track growth, Afghan government is expected to prepare for a new wave of threats. This time ISIS will come forward to fight against the Afghan government and its foreign allies. The US has only less than 10,000 troops on the ground to support Afghan security forces and conduct counter terrorism operations. It is worth mentioning that while crafting the U.S. withdrawal plan from Afghanistan, ISIS rapid emergence as a threatening force was not taken into calculations. This will probably force the U.S. and its allies to rethink their Afghan strategy in the face of an eminent threat to the existence of the unity Afghan government and to the regional stability. Even though recent U.S. and Afghan government gains in the forms of killing two key ISIS members in a drone strike signal their preparation against this threat, casual airstrikes and military operation are insufficient given the ISIS financial and recruitment strength. A comprehensive and resourceful counter terrorism strategy is required to face this notorious emerging threat in Afghanistan.

Ahmad Waheed is a Fulbright Alumni graduated from MIIS and a former senior research analyst at Program for Culture and Conflict Studies of Naval Postgraduate School, CA