The word “Islamic” today has become synonymous with scholarship of Quranic knowledge. And the Muslim world is considered as a homogeneous “Islamic” nation adherent of faith system, which has its roots in the Book called Quran.

There is the misguided view that all Muslim peoples’ actions and their practices are therefore within the ambit of a global nation and therefore the idea perhaps of “Islamic civilisation”, the same as for example the Western and Chinese civilisation. Nothing can be far from the truth!

But some knowledgeable ones, for their various strategies will even invent a practice to give it global “Islamic” tinge. For example:

-Obama administration’s political “Burial” of Osama bin Laden at SEA in the middle of the night was given as being according to “Islamic” principles!

Allegedly having killed him in an inland city Abbottabad-Pakistan, during the day, at least one thousand kilometres from the sea and dumping the dead body at night “according to Islamic principles” must top the list of inventions!

President Obama’s Father, an educated Muslim of Luo tribe of Kenya, was borne not far from the biggest fresh water lake in the world, Lake Victoria in East Africa. He could have told his son if Muslims or anybody else including pagans for that matter, dumped dead bodies in the lake under any tradition or custom.

And what about the son’s knowledge of the largest Muslim country Indonesia that is spread over thousands of Islands and where he had spent some time as a child. Do they practice burial at sea?

Is there more to be read in this drama than just that the burial at sea at night was according to “Islamic” practice?

Some others with vested agendas would make a name and gain fame for themselves, for example:

-Ayaan Hirsi (Magan) Ali’s crusade against FGM and a few other horrible Muslim peoples customs and cultural practices that she maintains are “Islamic”.

This is a classic case of entrepreneurship using “Islamic” scholarship that is to say, of Quranic ordinances.

Her father too is an educated person from Somalia.

What is the reason then for her fame and fortune? Is it for the sole cause against the primitive, pagan, tribal and cruel custom of female circumcision, honour killing and many other inhumane practices? And are they all exclusive praxis of Muslims?

No, her notoriety is for some other agenda.

She is neither the first nor the last crusader and writer and campaigner to protest against barbaric practises in Africa as a whole; including some Arab countries in the North and in other parts of Muslim tribal world.

Many activists and authors have put pen to paper too on this issue, particularly in East and West Africa, long before she was borne. But these people are hardly known in the world!

Any number of books can be found by Googling for them, for example -http://books.google.co.ke, Books about FGM.in Africa – by Daniel Njoroge Kranja, a Kikuyu from Kenya; and also by researching http://www.endfgm.eu/en.

Being a smart person Ms Hirsi Ali must have realised that taking up just one-issue crusade against FGM and other praxis in general, is not going to take her anywhere, particularly Europe.

So her fame and favourite blue eyed status she obtained in the West where she had sought asylum, allegedly deceitfully as in Holland, must be for her “war against Islam”. That is the Issue. For she propagates that FGM and circumcision is, wait for it ……. ”Islamic” and also only among Muslim people!

If not her grandmother who circumcised her painfully when she was a little girl, without anaesthetic of course, as they do for boys also; her educated and learned father should have informed his daughter that circumcision even for boys, let alone for girls, is not mentioned in Quran; hence NOT “Islamic”.

Then where did she acquire her pseudo scholarship of “Islam”? Obviously, from folklore and pronouncements of Muslim religious Ulema, practicing N2I, the number two Islam, a phrase that was coined by Shabbir Ahmad.

Having lived in Europe and now in US and travel round the world, surely Ayaan must know that labia cosmetic plastic surgery is a multimillion dollar cosmetic industry in the world, and of the well-off families, particularly in the West. If not she should search for Consultants on the web, for a long list of them.

Then too, why is she not including the Judeo-Christian world from where these practices were adopted by Muslims, in her crusade against this practice?

Why is she not famous for protesting against her country-men the likes of al Shabab who are creating millions of widows and orphans and refugees in Islam’s name under the falsehood of “Islamic” jihad?

It is a human-right issue and she has her right to protest. But her fame is for her bucketing on Islam on false premises. She falsely propagates that these practices are “Islamic”. And that is utter falsehood and that is her track record.

Had it not been so, her crusade would have been commendable and admirable, even though she is not alone nor the original crusader for these inhumane practices.

Further down the list of religious entrepreneurs bilking the gullible with their scholarship in the name of “Islam”:-

-Animal sacrifice – Qurban entrepreneurs trading in billion-dollar business during annual pilgrimage, the hajj. This is perhaps the largest religious trade in wastage of animal life touted as “Islamic” simply for stoking up the trade in hides and skins.

The sacrifice of animals-camels in particular- in the precincts of hajj is advised in Quran to feed the weary, lean and hungry pilgrims arriving there from across the world. Logical practical advice!

Religions and their operatives will trade in anything where there is a whiff of money, even for a smelly and fraudulent business:-

“Then woe to those who write The Book with their own hands and then say ‘This is from God’ to traffic with it for miserable gains! – Woe to them for what their hands do write, and for the gain they make thereby 2-79”.

-For equalities sake the female business sector should not be left out.

On the back of priestly Fatwas from highly venerated learned Muslims, the modern “Islamic” mode of ladies dress and fashion industry the Hijab-head cover and Niqab full body cover etcetera under the patronage of religions is now booming; like the fashion houses of London, Paris and Italy, and why not? Good luck to them.

A bit of hummer should be acceptable even on such a website too: 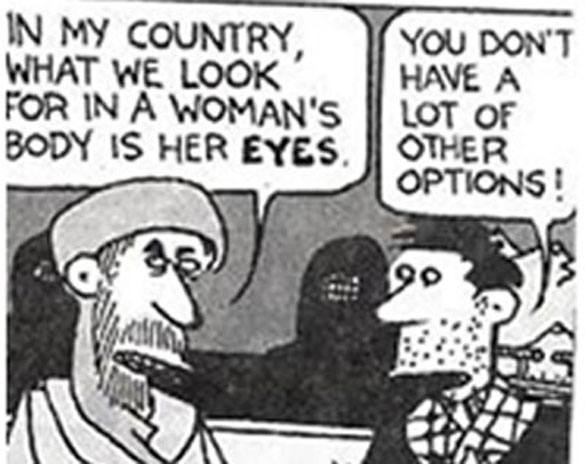 A well designed and colour co-ordinated Hijab, the scarf that frames the face of a woman, makes even an average woman look attractive. However for full face covering –… ignominy will cover their faces--refer to 10-27 of Quran

What is the con in this business of covering the hair is the connotation that it is a Quranic ordinance and hence “Islamic”.

24-31…therefore they should draw their scarf over their bosoms and not display their beauty (sensuality?) …

A cheeky Muslim comedian’s take on this would not go astray, modified in acceptable terms here:

During a Muslim wedding party a well-endowed woman clad in a low cut blouse, had an expensive bejewelled gold Allah medallion dangling on her chest. She noticed a male guest next to her staring at it.

Woman—“I see you like my medallion Yeh?” she asked boastfully

To this satire add a poet’s take:

Khilaaf-E-Sharaa Toe Yun’ Sheikh Thuuktay Bhi Nahin’,-- sheikh, in contradiction to their sharia would not even spit –(See Bukhari Vol. I No.402),

Magar Andherey Ujaaley May Woh Chuuktey Bhi Nahin’, -- but in daylight and darkness they never miss a thing.

Going further down, there are other edicts of the clergy too. The list of these religious trades from inside the nation and outside, is too long. Where to stop listing these frauds before fatigue and Islamophobia from within sets in. This is a fraud because it is committed by people who for sure know the truth.

Many worthy people in the past too have lamented about this situation. Said Hali:

Would there ever be an incoming tide for this nation after witnessing such low ebb of centuries?