Hollywood Golden Globes: And the winner is … Islamophobia

America's Middle East policy has been enthusiastically endorsed. Not at the UN or Arab League, however, but by the powerbrokers of Hollywood. At the Golden Globes, there were gongs for a heroically bearded CIA spook saving hostages and American face in Iran (the film Argo); a heroically struggling agent tracking down Bin Laden (Zero Dark Thirty) and heroically flawed CIA operatives protecting America from mindless, perpetual terror (TV series Homeland). 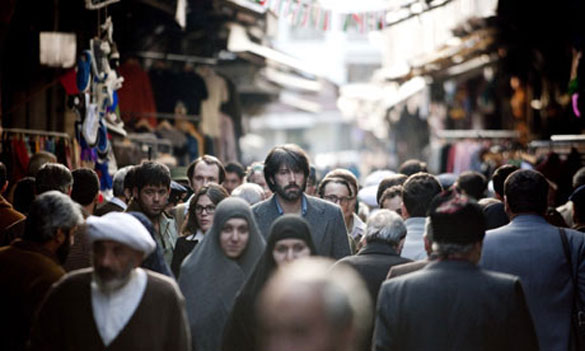 The three winners have all been sold as complex, nuanced productions that don't shy away from hard truths about US foreign policy. And liberal audiences can't get enough of them. Perhaps it's because, alongside the odd bit of self-criticism, they are all so reassuringly insistent that, in an increasingly complicated world, America just keeps on doing the right thing. And even when it does the wrong thing – such as, I don't know, torture and drone strikes and deadly invasions – it is to combat far greater evil, and therefore OK.

When I saw Argo in London with a Turkish friend, we were the only ones not clapping at the end. Instead, we were wondering why every Iranian in this horribly superior film was so angry and shouty. It was a tense, meticulously styled depiction of America's giant, perpetual, wailing question mark over the Middle East: "Why do they hate us?" Iranians are so irked by the historically flimsy retelling of the hostage crisis that their government has commissioned its own version in response.

Zero Dark Thirty, another blanked-out, glossed-up portrayal of US policy, seems to imply that America's use of torture – sorry, "enhanced interrogation" – is legitimate because it led to the capture of Osama bin Laden (something that John McCain and others have pointed out is not even true). Adding insult to moral bankruptcy, the movie has been cast as a feminist film, because it has a smart female lead. This is cinematic fraud: a device used to extort our approval.

Homeland was no better. It is the story of an American marine taken captive by a top al-Qaida terrorist who turns out, wouldn't you know, to be Palestinian. Tortured while detained (though I'm guessing this would be bad torture, not the good kind used in Zero Dark Thirty), the marine turns to Islam and, coincidentally, to terror. Meanwhile, all the Arab and Muslim characters in Homeland – however successful, integrated, clever, whatever – are all somehow signed up to the global terror network. As Laila Al-Arian, a journalist and co-author of Collateral Damage: America's War against Iraqi Civilians, puts it: "Viewers are left to believe that Muslims/Arabs participate in terrorist networks like Americans send holiday cards." She describes this celebrated Golden Globe winner as "TV's most Islamophobic show".

When challenged, the creators of these travesties respond with pat dismissal: the director Kathryn Bigelow pointed out that Zero Dark Thirty is "just a movie". Ben Affleck has spoken touchingly of his concern that Argo might be politicised.

But why would these renditions of US policy be seen in the Middle East as anything other than attempts to seize the moral high ground? It's all supposed to be a massive stride forward in the portrayal of complexity, made to challenge American audience preconceptions – and a far cry from the bad old days depicted in Reel Bad Arabs, a documentary that shows how Hollywood caricatures Arabs as "belly dancers, billionaire sheikhs and bombers", according to one reviewer.

But such slick, award-winning cinema isn't about nuance, it's just self-serving moral ambiguity – and in this sense it is a fitting cultural reflection of actual US policy in the Middle East.

Rachel Shabi has written extensively on the Israeli-Palestinian conflict and the Middle East. Her award-winning book, Not the Enemy: Israel's Jews from Arab Lands, was published in 2009. She received the Anna Lindh Journalism Award for reporting across cultures in 2011 and was shortlisted for the Orwell Prize the same year.