With Barack Obama's victory in the 2008 presidential election, many in the United States hoped for the retreat of Bush administration policies that criminalised the lives of Muslims. Yet Obama's two terms did little to challenge the most devastating forms of American Islamophobia: war-making, policing and immigration policy. On the contrary, his presidency saw an eager expansion of Islamophobia. 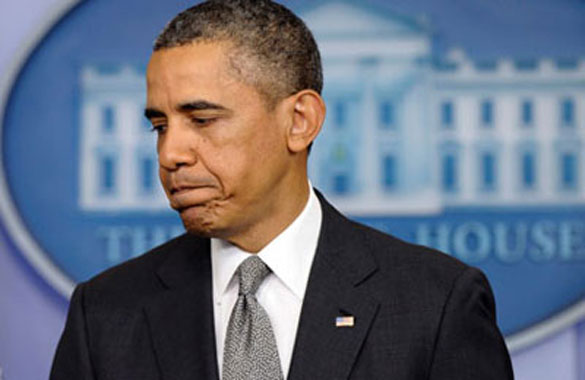 President Barack Obama speaks as he hosts an Iftar dinner during the Muslim holy month of Ramadan in the State Dining Room at the White House in Washington on July 14, 2014 [File: AP/Charles Dharapak]

Obama renewed and expanded the US Patriot Act. He classified Muslim civilians killed in US strikes as "enemy combatants". And his Countering Violent Extremism initiative functioned as a form of soft-policing in the lives of ordinary Muslims.

In his creation of a "kill list" and a sweeping provision allowing the worldwide indefinite military detention of US citizen terror suspects without charge, Obama did not just inherit Bush-era Islamophobia - he proactively expanded it.

Twelve years later, American voters are once again asked to confront an overtly Islamophobic Republican administration. But it bears asking: what will a victory for Democratic candidates Joe Biden and Kamala Harris mean for American Islamophobia? 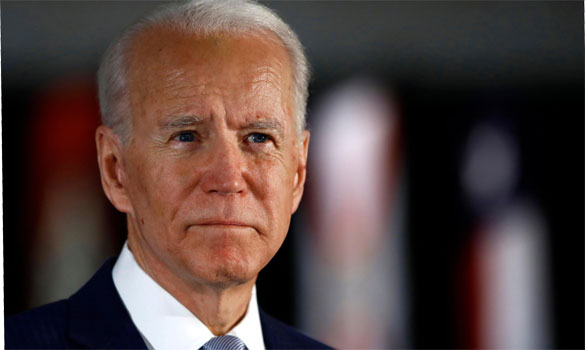 FILE – In this March 10, 2020, file photo, Democratic presidential candidate former Vice President Joe Biden speaks to members of the press at the National Constitution Center in Philadelphia. Biden is expected to give his first public comments on a sexual assault allegation that has roiled his presidential campaign. (AP Photo/Matt Rourke, File)

War: The foundation of American Islamophobia

Islamophobia is often mistakenly defined as anti-Muslim bigotry. But a better definition of Islamophobia would be systemic racism, ie, not a matter of individual attitudes.

Thus, harassment or negative media portrayals of Muslims are symptoms of Islamophobia which is, at its core, rooted in practices of the state.

When defined this way, it does not matter whether Obama hosts a Ramadan dinner or if Hillary Clinton gives a Muslim man a prime speaking spot at the Democratic National Convention. It does not matter if George W Bush urges Americans to love their Muslims neighbours. In shoring up the most egregious aspects of US empire-building, the American political elite remains undeniably Islamophobic.

When defined this way, it is evident: both sides of the 2020 presidential ballot promise an undeniable extension of American Islamophobia.

Anti-Muslim sentiment in the US has meant a blank cheque for American war-making. As media scholar Deepa Kumar has pointed out, "the fear of Islamic terrorism is manufactured to grease the wheels of empire."

The US seamlessly took advantage of anti-Muslim sentiment after the 9/11 terror attacks to justify its 2003 invasion of Iraq. In painting the entire Muslim world as guilty, it mattered little which Muslim-majority country was invaded as retribution - not that any should have been.

So committed was the US to linking Iraq to 9/11 that it named a detention centre in Iraq after a fire marshal who died in the 9/11 attacks. The Department of Defense even named a bomb, dropped on Iraqi people in 2003, after a man who died on 9/11.

Not surprisingly, the ploy worked: in a study of Americans born after 9/11 I did for a forthcoming piece, one in five respondents believed the late Iraqi leader Saddam Hussein was responsible for the attacks.

The Democratic Party establishment has been an eager participant in the devastation of Iraq. The 2016 Democratic National Convention featured Khizr Khan, who invoked the death of his son, a US army officer, in Iraq to both justify his support for Hillary Clinton and take a stance against the overt Islamophobia of Donald Trump.

To critics of the Iraq war, invoking Muslim participation in an anti-Muslim war to challenge Trump's Islamophobia was a perverse act of political pageantry on the part of the Democrats. So it came as no surprise when the 2020 DNC once again showcased supporters of the Iraq war. At their helm stood Biden, whose disastrous involvement in Iraq stretches back to well before Bush's 2003 invasion.

Biden's VP pick, Kamala Harris, has proven to be an eager ally of the military. She voted against even a moderate cut in the gargantuan military budget in the middle of the COVID-19 economic crisis. Harris's cosy relationship with the hawkish Center for a New American Security promises a renewed sponsorship of an American militarism whose raw material is anti-Muslim sentiment.

The foundation of any fight against Islamophobia is anti-imperialism, for which American electoral politics has no quarter, regardless of partisan affiliation. The current election cycle does little to unsettle this uneasy fact.

The US's unwavering, bipartisan support for Israel remains an enduring symbol of American Islamophobia. To be clear, the Israeli system of settler colonialism cannot be reduced to Muslim-Jewish animosity or anti-Muslim violence. Yet one of the key weapons in Israel's arsenal, alongside the literal arsenal of US-funded weaponry, is Islamophobia.

Consider, for instance, the 2012 advertisements that appeared across American cities, urging people to support "civilised" Israel over "savage" jihadis. Or the fact that America's most blatant Islamophobes are often also the most vocal supporters of Israeli militarism.

In 2014, with US support, Israel launched an assault on Gaza called Operation Protective Edge. After greenlighting the attack, Obama hosted a Ramadan dinner for Muslim American leaders. Countless Muslim and Arab advocacy groups urged a boycott of the event, condemning it as a ploy to distract from US state support for the violence perpetrated against Palestinians.

Under Trump, American support for Israel has continued unchecked. His first term alone has seen unwavering support for Benjamin Netanyahu's right-wing government and its moves to annex the West Bank. Earlier, Trump's recognition of Jerusalem as the capital of Israel enshrined the long-held US disregard for Palestinian existence.

The 2020 Democratic ticket offers little in the way of opposition to this legacy. Harris has said emphatically that her support for Israel would be unconditional. Biden's political record suggests the same. If this were not enough evidence of the enduring anti-Palestinian sentiment of the 2020 Democratic ticket, last month's DNC saw an unequivocal rebuke for the BDS movement.

Presidential elections consistently force voters to ratify US support for Israel. "Every time, every single time, it's some aspect of Palestinian freedom that must be compromised. Never the candidate's position. Never the system's inherent conservatism. Never the ongoing march of settler colonization. We're volunteering to be captured by the settler's notion of common sense," writes Palestinian American scholar Steven Salaita

Hindutva And The US-India Alliance

Trump's alliance with Indian Prime Minister Narendra Modi calls for obvious parallels between the two, particularly around their overt policies of Islamophobia. This was most apparent during Trump's February visit to India, during which sectarian violence in the streets of New Delhi revealed the ugly reality of Hindu supremacy in India. A Trump victory is sure to see the right-wing alliance between the two nations flourish.

With biracial Harris as running mate, Biden has invited identity-minded South Asians in the diaspora to sign on to his ticket. Shortly after her nomination was announced, Muslim American writer Wajahat Ali tweeted, "we're going to have someone who knows her Mirch and Masala in the White House" and comedian Hari Kondabolu followed suit, saying "the fact there is a Democratic VP candidate who is a Black & Indian woman whose parents are both immigrants is a sign of progress. This does not mean she was my preferred VP candidate or someone whose actions as prosecutor I endorse. This is to recognize and appreciate that this is an important moment for a lot of people."

Yet there is little to suggest that Harris's biracial identity would be a sign of progress. In fact, a Biden presidency will likely mean a continuation of Trump-era support for Modi's ethnonationalist project of Hindutva, an ideology that has been calamitous for Muslims and caste-oppressed Indians.

Many worry that Harris's South Asian identity is being instrumentalised by the Democratic Party as a gloss for their tacit support for Modi's Hindutva ideology.

Very Little to Vote For

It Seems Inevitable: Muslim Americans will come out in droves to support a Biden/Harris presidency. The same anti-Trump sentiment that filled airports with protesters in 2017 after the "Muslim ban" was issued will animate these voters. Yet they will not be voting for a rollback of Islamophobia, but a cosmetic change to it.

Regardless of the outcome of the 2020 presidential election, Islamophobia will remain the law of the land.

Every election cycle, Americans are encouraged to see binaries rather than continuities, to fixate on petty clashes between two large parties rather than the vast overlaps between them. Yet one might ask: what are the Obama-era roots of migrant children being caged at the border? Which Democrats supported legislation decades ago that was the foundation of Trump's border wall initiative? What will Biden's promised increase of federal funds for policing mean for American Muslims, with Black Muslims shouldering the greatest burden?

In fact, maybe we should take Biden at his word: that under him, "nothing will fundamentally change".

This November, as in 2016, American voters get a right-wing ballot: decidedly anti-Black, pro-war, and anti-worker. The Democratic Party's strategy of courting the right has a deep history: Bill Clinton won part of the Republican vote, first, by executing a Black man with mental illnesses in 1992 and next, by playing on anti-Black tropes to gut America's welfare programme in 1996. Yet his soulful saxophone playing was enough to render him anti-racist. Today, Harris has a far better cover: a biracial Black and brown identity.

For those frustrated with this impasse, the moment calls for action outside of the electoral system. It asks Americans to build strong labour movements, which the Republicans and Democrats alike will attempt to undermine; to organise collectively and militantly against debt, war, and climate devastation, which both parties promote. And, if the "mirch and masala" celebrations sweeping Twitter are any indication, it is time to decisively reject the enduring use of brown skin to cover up Islamophobia.

Americans can choose to remain unimpressed by attempts to diversify a cabinet of imperialists and instead stand against the ever-expanding apparatus of military and police domination. We can choose to reject rejoinders to sign on with a lesser evil or to support "any functioning adult". Instead, it is time to remember that each election cycle asks earnest, thoughtful Americans to set aside their agitation and ratify a system that does not serve them. It is time, for once, to keep the spotlight on the most insidious and enduring elements of America's political system.

Nazia Kazi is Associate Professor of Anthropology and author of Islamophobia, Race, and Global Politics.

Original Headline: Islamophobia in the US presidential election