I was born in 1982, in the beautiful American city of San Jose, California. A proud patriotic Muslim American, my dad would decorate our house with lights every Fourth of July.

Fast forward to the year 2001, when I got admitted to one of America’s top medical schools – the Harvard Medical School in Boston. Moving from San Jose was hard. I stayed in the dorm. Every morning, when I went to take a shower, I saw a sticker on one of the bathroom mirrors on my floor that said, 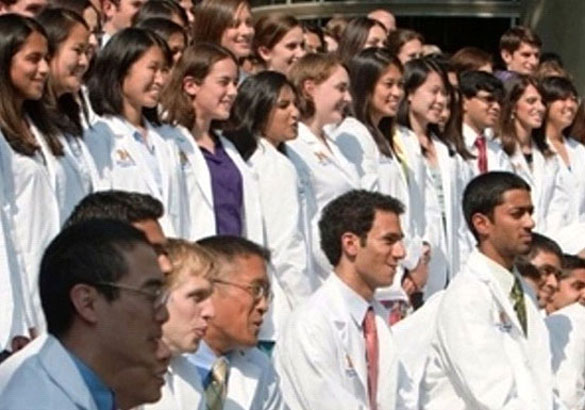 Every day I would see hate stickers against Muslims at Harvard Medical School. PHOTO: AFP

‘Whoever is a friend of the Muslims is a traitor of Christianity and of America’.

In the evenings, sometimes, I would go to the reading room to study. Right on the entrance door, I would find the same sticker. I saw similar messages written on public vans and buses and plastered on walls across Boston. I heard fiery speeches against Islam by Christian clerics in downtown Boston, some calling for my death.

I felt intimidated, unwelcomed and unaccepted.

I often wondered why there was not a single Christian student, out of the thousands at Harvard, who had the moral integrity to tear down the hate stickers on campus – hate stickers that openly attacked me for being Muslim.

Would Christ not preach universal love and peace?

What had happened to those who claimed to follow him?

I waited and waited for my five years at medical school but these stickers never came down.

Then, when I found out that a group of Christian students had forced the administration of Mt Sinai Medical School in New York to expel all 23 of its Muslim students from that medical school, and were threatening widespread violence, I forgot my own pain for a bit. At least I was still able to pursue my studies. These other students had lost their careers merely for having an identity.

Soon after, I also found out that Muslim engineering students at Massachusetts Institute of Technology (MIT) were forbidden to eat in the university cafeteria and dorm kitchens. Christian student groups had complained that Muslim presence was making the food filthy and hurting the sentiment of ordinary Christians at MIT.

I forgot my pain once again. At least, I could still eat freely at Harvard.

The atmosphere of intimidation never grew calm. I had some Christian friends but most were friends as long as I did not express my religious views openly. Attacks on Muslims kept growing and discrimination against them had become an accepted norm. Even Muslim graves were attacked in cities across the US for polluting American soil. I still decided to stay in the US and help people in and around San Jose.

I continued to hope things would improve.

However, after a series of other targeted attacks on fellow Muslim doctors, I decided to leave the US in 2008. I could not take it anymore. I moved to Pakistan to pursue a career in cardiology. My friends ask me if I will ever return to the States. I think I will but not until the Christian clergy stops condemning me as ‘worthy of death’ and the American government stops jailing me for calling myself a Muslim openly and for professing my faith as I deem fit.

I miss the US a lot but I also love my new homeland. There are a few bigots here as well but I never have to worry about them. My friends come to my rescue before I know it. I am different but I am loved. I feel welcomed and accepted. I have the freedom to speak and profess my faith. Until my motherland is reformed, I shall stay in Pakistan God willing.

I am currently pursuing a degree in cardiology in Lahore and this is my story.

Kashif Chaudhry is a graduate of King Edward Medical University in Lahore and Mt Sinai University Hospital in New York who is currently completing his Cardiology fellowship at Tufts University in Boston, USA. Kashif writes for various American newspapers and Pakistani publications and blogs at the Huffington Post. His interests include medicine, Pakistan affairs and Muslim-American community affairs.