The Significance of the Martyrdom of Imam Hussain 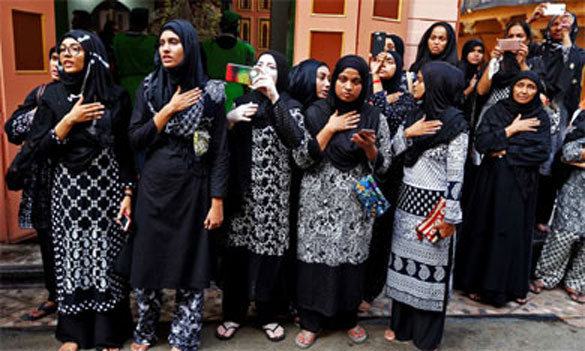 Women mourn as they watch a Muharram procession in Ahmedabad, India. ─ Reuters

“If I had 72 companions like Husain, I would have freed India in 24 hours, from British”. Gandhi, the champion of non violence himself, further added “the progress of Islam does not depend on the use of sword, but on the supreme sacrifice of Imam Hussein, I learnt from Hussein, how to achieve victory whilst being oppressed”.

The little writer in me, never wanted my mother to finish the story of Karbala, as she herself could not hold her tears, while describing the utmost gruesome tyranny on humanity. As, I grew up, I read Karbala and understood the essence of supreme sacrifice from the leader of all the martyrs. I could differentiate, being a victim and a survivor.

The martyrdom of Hussein is supreme in every sense and he will be the leader of all martyrs because of the fact that he just not defeated Yazeed; he defeated every tyrant, despot and diabolical propaganda they carry against humanity. Karbala is just not about making Islam alive and a triumph of good over evil it’s a tight slap on Iblees.  It’s a reminder to him, that we are our Lord’s best of the best creation and we love our Prophet Muhammad SAW more than anybody in this universe. We may be clay and we may go astray but we will keep humanity alive because Imam Hussein is our heart, Prophet Muhammad SAW is our love and The ALLAH is our Almighty.