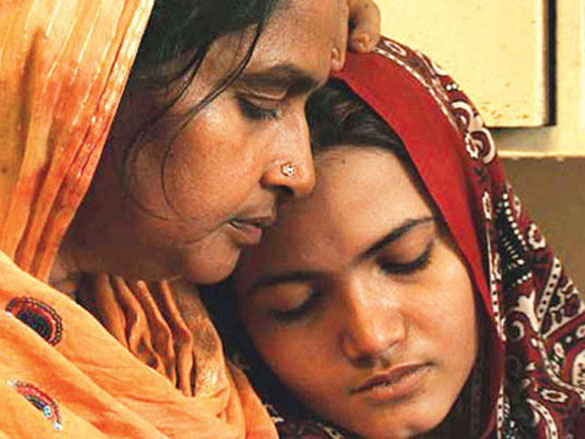 •  Rise of the Women Radicals in Indonesia

•  Student Denies Being Paid for Sex with Luthfi Aide

Photo: The short film shows how Kainat’s family suffered after she decided to bring the alleged perpetrators to justice

“I didn’t like the photographs of young girls singing and dancing. This is Kashmir,” Tariq Majid Khan, who is pursuing a masters degree in English literature, told investigators soon after he was arrested for intimidating and forcing Kashmir's only all-girl rock band into silence. The

Jammu and Kashmir police have arrested three men and are looking for at least 10 more online abusers who posted hate and threatening messages on the Facebook page of Pragaash (Kashmiri word for the first light of day).

Srinagar-based cable operator Irshad Ahmad Chara and Rameez Ahmad Shah, who recently cleared Class 12 and is a resident of Baba Wayil in Ganderbal, near Srinagar, are the other two.

The police, who said the three were aged between 17 and 24 and don't know each other, are probing if the men are in any way linked to a militant or a hard-line group.

“There is no evidence yet but they are clearly ‘mind Jihadis’. The views they posted online are very radical, symptomatic of the increasing radicalisation of society,” a senior police officer, who didn’t wish to be identified, said.

Another officer, too, said there seemed to be no specific motive. “It is like a rowdy comment, they never thought about the consequences,” said the police officer.

The three have been charged with criminal intimidation and sending offensive messages electronically (Section 66A, IT Act).

They referred to the band members as prostitutes. “Three girls raped in Kashmir and thrown into the river Tawi. Stone pelting has begun and the common Kashmiri is suffering” read Khan's post. His father has a small farm in Anantnag and he is pursuing a degree from IGNOU.

Cable operator Chara wished the girls and their families to be burnt. Son of a vegetable vendor, he was shocked at his arrest. “I saw posts referring to the girls as shameless and spoilt and felt the need to be part of the online conversation,'' he told the investigators.

All of them have been remanded to police custody for nine days.

Sec 66A is a bail able offence and the police are trying to build a case under Section 506 for criminal intimidation, which can attract seven to 10 years' imprisonment.

Threats and then a fatwa by the grand mufti of Kashmir forced Noma Nazir, 15, Aneeqa Khalid, 16, and Farah Deeba, 15, to disband more than a month after their first performance in the “Battle of Bands” contest in Srinagar. Ironically, the father of one of the girls is a police inspector.

BEIRUT: A pregnant teenager was killed by her brother in south Lebanon in what police have described as an "honour killing" case, security sources said Friday.

The body of 18-year-old Baghdad Khaled al-Issa was found late Thursday in the southern border region of Wazzani, the sources told The Daily Star.

They said Issa was found in a pool of blood with several stab wounds to her head and sides.

An investigation revealed that Issa was killed by her own brother, Jihad, in a so-called "family honor" killing, a police report said.

One security source said the teen was seven months into her pregnancy.

The law calls for cancelling an article in the penal code that grants a commutation of sentence for anyone who kills a wife, husband or close family member caught in the act of adultery, under the pretext that the act was driven by extreme anger.

Sydney: A young mother accused of sorcery was stripped naked, doused with petrol and burned alive in front of a crowd including school children in Papua New Guinea, reports said today.

The woman, identified by The National newspaper as Kepari Leniata, 20, was reportedly tortured with a branding iron and tied up, splashed with fuel and set ablaze on a pile of rubbish topped with car tyres.

According to the rival Post-Courier newspaper she was torched by villagers who claimed she killed a six-year-old boy through sorcery, with police outnumbered by onlookers and unable to intervene.

A fire truck that responded to the incident, which took place yesterday morning in Mount Hagen city in the Western Highlands, was also chased away.

According to the reports, which were accompanied by graphic front-page images of the woman's burning corpse, she admitted to killing the boy, who died after being hospitalised with stomach and chest pains on Tuesday.

Police said they were treating the torching as murder and preparing charges against those responsible.

There is a widespread belief in sorcery in the poverty-stricken Pacific nation where many people do not accept natural causes as an explanation for misfortune, illness, accidents or death.

In 1971, the country introduced a Sorcery Act to criminalise the practice. But PNG's law reform commission recently proposed to repeal it after a rise in attacks on people thought to practise black magic.

"Sorcery and sorcery-related killings are growing and the government needs to come up with a law to stop such practice," Piso told The National.

Police arrested dozens of people last year linked to an alleged cannibal cult accused of killing at least seven people, eating their brains raw and making soup from their penises.

There have been several other cases of witchcraft and cannibalism in PNG in recent years, with a man reportedly found eating his screaming, newborn son during a sorcery initiation ceremony in 2011.

In 2009, a young woman was stripped naked, gagged and burnt alive at the stake, also in Mount Hagen, in what was said to be a sorcery-related crime.

Rise of the Women Radicals in Indonesia

Some Muslim women in Indonesia are stepping up to a more active role in radicalism as the country's terror cells regroup, with analysts warning the authorities to strengthen anti-terrorism measures.

Discarding their erstwhile background supporting role to the men, these women have taken to promoting pro-radical narratives online, and even offering shelter to the families of jailed terrorists, analysts say.

Radical Indonesian women have interviewed the wives of convicted terrorists, including the wife of a British Muslim extremist, and these interviews are posted on extremist websites.

The interviews were done to encourage "support for terrorist activities and raising funds," said Taufik Andrie, a researcher at the Institute for International Peace Building (YPP), who has been monitoring their activities.

Survey asks 3,000 students about forms of abuse they face

Dubai: Verbal abuse at home is the number one form of violence that Emirati children are subjected to, reveals the UAE’s first ever child abuse and violence survey.

The report, released on Thursday, found that while verbal abuse at home accounts for 0.73 per cent of the 3,000 pupils surveyed, sexual abuse was considered to be the least common accounting for 0.08 per cent in schools. Visual abuse (using the eyes to assert feelings of anger) at home was considered the second most common, with neglect the third and physical the fourth.

Student Denies Being Paid for Sex with Luthfi Aide

The university student caught naked in a hotel room with the aide of a political party chief during a bribery bust last week was not paid to have sex with him, her lawyer said on Tuesday.

Maharani Suciyono, from Moestopo University in South Jakarta, was only at the hotel to have dinner with Ahmad Fathanah, who was arrested for allegedly receiving a bribe on behalf of his boss, Luthfi Hasan Ishaaq, the former head of the Prosperous Justice Party (PKS), according to her lawyer, Wisnu Wardhana.

The High Court this week rejected a request to place a male suspect accused of sexually abusing an 11-year old relation in custody.  The suspect was previously held under house arrest at the same property where his alleged victim lived.

The Prosecutor General (PG’s) Office confirmed that following a remand hearing on Tuesday (February 5), the suspect had been released from the house arrest – with no restrictions currently placed upon his movement ahead of his unscheduled trial.

Women members of the Shoura Council will set up a special committee to protect the rights of women, said Dr. Nuhad Al-Jishi, a member of the consultative body.

“Women members will be appointed in all the 13 subsidiary committees of the Shoura and we’ll set up a new committee to protect women’s rights if it was required,” she said.

However, she pointed out that the creation of such committees would depend on the Shoura’s rules and regulations.

“There is a committee for human rights and another one for social affairs at the Shoura. If the heads of these committees want to set up their women branches, they have the right to do so in accordance with Shoura regulations,” she pointed out.

The incidence of acid throwing victim Rekha Begum was recorded as a criminal case on November 27, 2006 in Narail. Seven years on, with the exception of one having been charged the rest have not been apprehended by the police. Today, we are faced with the prospect of the case being annulled since the case is being touted as “politically motivated” and which has been referred to the Awami League National Committee (ALNC).

Amid the media storm that broke after the gang rape and death of a 23-year-old Delhi girl Jyoti Pandey, two journalists have made a short film that follows the story of a teenage girl allegedly raped in a village in Dadu, rural Sindh in 2007.

The story revolves around the central character of the film, Kainat Soomro, who was raped by four men while she was on her way back home from school. The film depicts Kainat’s struggle for justice. The story narrates how the ugly incident became a matter of ‘family’s honour’.

The short film titled Outlawed in Pakistan was one of 15 short documentary films selected for the 2013 Sundance Film Festival. Directors and producers of the film Habiba Nosheen and Hilke Schellmann, while speaking to ABC News said that the documentary was inspired by Kainat’s perseverance.

ISLAMABAD: The head of the Senate’s special committee on election reform shot down a proposal on Thursday to grant 10% party tickets to female candidates so that they could directly contest polls.

The proposal was drawn up earlier by Pakistan Muslim League-Quaid lawmaker Riaz Fatyana who was specially invited to attend the panel meeting. Fatyana had also proposed that elections in the polling stations should be declared null and void in case there is less than 10% turnout of registered female voters.

Capt Zannatul Ferdous is the first female paratrooper of Bangladesh.

Zannatul yesterday successfully jumped off a special helicopter with a parachute from 1000 metre at Panichhara zone as part of her training of the Basic Para Course at the School of |Infantry & Tactics in Jalalabad Cantonment in Sylhet, said Lt Col Saiful Islam, chief trainer.

After being commissioned in 59 BMA long course, Zannatul joined the Bangladesh Army in 2009. She hails from Bishnupur of Bijoynagar upazila in Brahmanbaria.

Five other Army officers and 15 Navy officers also participated in the training with Zannatul.

ISLAMABAD: Pakistan does not have a national cancer registry since 1983 when it was closed down after funds ran out. Other reasons hindering guidelines for prevention of breast cancer are a shortage of trained personnel and governmental neglect.

This was said by Dr Huma Qureshi, executive director at Pakistan Medical Research Council (PMRC), after a seminar, “National Consultation On Breast Cancer” held on Thursday at a local hotel.