I Made Irreverent Art about Muslims, It Took a While, but Eventually Muslims Came To Love It

In the wake of the horrific Charlie Hebdo attack in Paris this week, people are asking why Muslims can’t take a joke.

It’s a question I’ve occasionally asked myself. As a female Muslim comic, I’ve experienced the challenges of combining Islam and humour. When my Canadian television show “Little Mosque on the Prairie” first aired in 2006, I faced angry reactions. My mosque petitioned to have me removed. 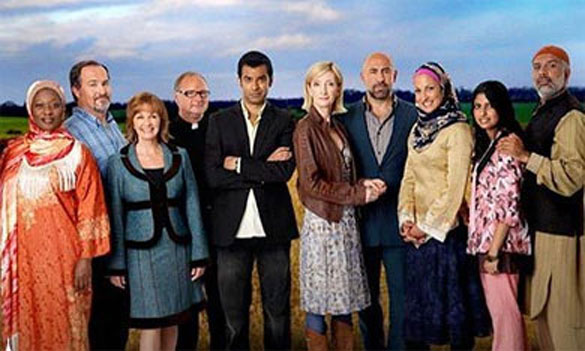 The “Little Mosque on the Prairie” cast. (Image courtesy of the CBC)

But I know, too, that Muslim-inspired comedians, graphic novels, television and films are thriving in Muslim countries and in the West. It’s a sign of a community coming of age, exploring the outer limits of what is religiously acceptable.

I grew up in Brampton, Ontario, in a very conservative religious family. After being rejected from the University of Toronto’s medical school, I decided to nurse my passion for comedy.

I made several satirical films about Muslims and terrorism, including the short film “BBQ Muslims.” They were well received at film festivals, which spurred me on. So, I pitched a television show to the CBC about a Toronto lawyer named Amaar Rashid. In “Little Mosque on the Prairie,” Rashid gives up his cozy law career to become a penniless imam, running an improvised mosque within a church in the tiny town of Mercy, Saskatchewan.

Before I decided to move forward,  I wanted some religious guidance. Was making this show religiously acceptable?

As a Sunni Muslim, there’s no central authority to consult (unlike Catholics, who have the Pope). Muslims can follow the opinions of scholars or make up our own rules. Often, if we’re not sure, we’ll consult a scholar or imam.

But these scholars are used to inane questions like “Can you eat marshmallows if the gelatine is pork-based?” The very idea of a Muslim woman creating a sitcom about Muslims baffled my advisers. Could I not make a documentary instead? Or a show with puppets?

I couldn’t get a straight answer from anyone, so I did my own research. I couldn’t find anything in the Qur’an or the Hadith on comedy. In fact, there are stories of the Prophet Muhammad laughing at practical jokes played by his companions and joking himself with his family. And a lot of verses in the Qur’an advise reasonable judgment when going about life.

So I employed mine. As a practicing Muslim, I was uncomfortable making fun of the prophets or the divine. But I did want to make fun of Muslims. Narrow-minded, patriarchal men (whose equivalents exist in all communities) were the bane of my existence; I wanted to poke fun at their trivial obsessions.

Unfortunately, some members of my Muslim community couldn’t tell the difference between making fun of Muslims and making fun of Islam. After the show aired, I was swiftly condemned at my mosque. Someone started a petition to have me removed as a member in good standing; at one Friday sermon the local imam talked about how Muslims were not allowed to shame Islam. Men yelled at my husband to divorce me.

For the first time in my life, I was afraid to be in a mosque.

It took me years to process what happened. Looking back, I realize I made some miscalculations. My show wasn’t offending people’s religious sensibility; I was poking at their conservative cultural sensitivities. But sometimes, it’s hard to separate the two.

But my experience (and the experience of many Muslims of my generation) was different. My husband and I kiss and cuddle in front of our children. We discuss sex education with them. I wanted to reflect this in my show.

In one segment, one of the show’s producers asked if a wife could pinch her husband’s butt in the mosque. I said yes; I figured it was a private moment between spouses. Later, I was asked to denounce that scene at a Muslim conference where I was giving a talk. But I didn’t. I felt loving behaviour between spouses in a mosque was unconventional, for sure. But un-Islamic? Not at all.

Most mosques are set up so that a husband and wife could never have access to each other in the first place. But during the time of the Prophet, women could communicate easily with men at mosque and even stand up to argue with a ruling they didn’t agree with. Some Muslims had made some of our mosques into places where love and joy and entertainment were forbidden. But Islam had not.

Throughout its six years, “Little Mosque on the Prairie” addressed issues of sexism, extremism and racism. Conservatives continued to attack what they said was my attempt to “reinterpret Islam.” They tried to rally opposition to the show.

Soon Muslims started noticing that their non-Muslim friends were bonding with them over the watercolor. Muslims bury their dead facing Mecca? You guys get wigged out by Halloween? Chaperoned dating?

By the time the third season aired, the community had stopped being bothered by the show. Nothing catastrophic had happened to Islam’s reputation. In fact, the opposite was true. People felt they could relate to their Muslim neighbors. My life started returning to normal, and I became a minor celebrity. People stopped me on the streets to ask whether the imam would marry his sweetheart, Rayyan, or would J.J., his romantic rival, take his place?

Even now, two years after the show ended (we produced 91 episodes over six years), Muslims come up to me and ask when I’m going to create the next show. I have to stifle the urge to throttle them for making my life a misery. But I smile sweetly and say, “One day.”

I’d be lying if I said I wasn’t frightened at times for my safety, wondering if I’d ever have the same relationship with my community again. The mosque had been such a vital and empowering part of my life growing up; I couldn’t imagine a life being ostracized from it. Occasionally, I wondered if it was all worth it. But deep down I know people saw “Little Mosque on the Prairie” for what it really was: a show that celebrated faith through comedy.

Zarqa Nawaz is the creator of Little Mosque on the Prairie and author of the forthcoming Laughing All the Way to the Mosque.