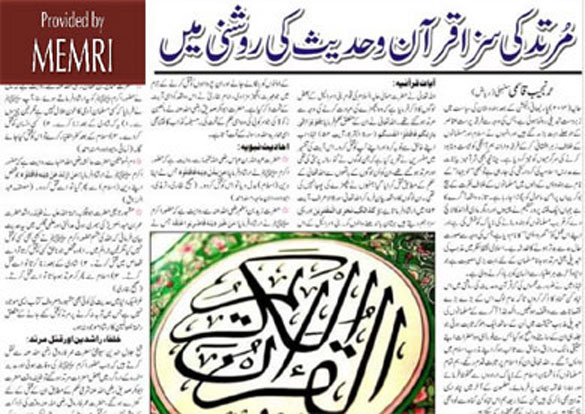 In recent months, and especially after the government of Prime Minister Narendra Modi came to power following the 2014 parliamentary elections in India, extremist Hindu organizations allied with Modi's Bharatiya Janata Party (BJP) have conducted several programs to convert Muslims and Christians back to Hinduism. Such programs, often described as Ghar Wapsi (or "returning home"), have been led by the Rashtriya Swayamsevak Sangh (RSS) and its affiliated organizations, which argue that the Muslims and Christians are originally Hindus.

The RSS's conversion - or re-conversion - programs have been widely criticized by Muslims and secular Hindu groups and politicians, though media outrage has not been seen in India when Islamic clerics and Christian missionaries convert Hindus. Under the Indian constitution, religious freedom is guaranteed, which means that people are allowed to profess, propagate, and convert others to their religious beliefs. The converts to either Hinduism or Islam and Christianity are generally impoverished.

In a recent article, the leading Indian Urdu daily Urdu Times published an article, written by Muhammad Najeeb Qasmi Sanbhali, who quoted verses of the Quran, Hadith (sayings and deeds of Prophet Muhammad), as well as sayings and practices of the Righteous Caliphs (the first four caliphs of Islam: Abu Bakr, Umar Ibn Khattab, Usman Ibn Affan, and Ali Ibn Abi Talib) to justify that the apostates, i.e. Muslims being converted to Hinduism, are justified to be killed.

Following are excerpts from the article, titled "The Punishment for an Apostate In The Light Of the Quran and Hadiths":

"After The Recent (2014) Parliamentary Elections … The Morale of [Hindu] Sectarian Elements Has Been Encouraged, and By Sowing Poison against Islam and Muslims They Have Stepped Up Activities to Destroy the Communal Cohesion"

"After the recent (2014) parliamentary elections, major changes have occurred in the polity of India due to which the morale of [Hindu] sectarian elements has been encouraged, and by sowing poison against Islam and Muslims they have stepped up activities to destroy the communal cohesion. Therefore, sometimes a character assassination of Islamic Madrasas is being carried out through mischief-making statements; at other times the peaceful environment is being damaged by sowing the seeds of hatred in the hearts of Hindus against Muslims in the name of 'Love Jihad' [the phrase used by Hindu groups to mean conversion of Hindus in order to marry Muslims].

"The fresh incident is from Agra [the city of Taj Mahal], where a mischief-nurturing organization made an effort to convert poor Muslims into Hinduism by offering inducements of money and other material benefits, and called its effort 'returning home,' due to which there is concern about the [law-and-order] situation going from bad to worse. From the Islamic viewpoint, the change of religion, i.e. becoming an apostate, is big trouble for a Muslim, which destroys the human being as per the [Islamic requirements for the] World and the Hereafter.

"Therefore, I felt the need to discuss this catastrophic sin in the light of the Koran and Hadiths [traditions of Prophet Muhammad] so that common people become aware of the big losses from it. Praise be to Allah! The change of religion of Agra's Muslims proved in reality a fraud with them which became very soon evident before them, and they quickly returned to their religion of Islam... May Allah keep them steadfast on Islam, keep safe all of us Muslims from the un-pious machinations of the enemies of Islam, and our end may come in faith. In the end of the article, [I] have discussed measures through which we can save ourselves from this harmful sin and can keep our brothers safe.

"Islam prescribes preaching and propagation [for conversion of] non-Muslims, but as per the Islamic teachings a non-Muslim cannot be forcibly made Muslim. However, if a person leaves Islam and becomes an apostate, then he will first be invited to accept the religion of Islam and every effort will be made that he once again accepts Islam so that he can be saved from the eternal painful punishment [from Allah]. If the person leaving Islam, i.e. the apostate, accepts the religion of Islam once again, then he will have to seek forgiveness from Allah and recite the Kalima-e-Shahadat [the words: 'I bear witness that there is no deity but Allah and I bear witness that Muhammad is his messenger'].

"However, if an apostate is not ready to accept Islam again, then the way a person is hanged for treason against a worldly government, in the same way a rebel against Allah too will not be offered any concession and an Islamic government will have him murdered, as all interpreters [of the Koran], specialists of Hadiths, jurists, and religious scholars have decided in the light of the Koran, Hadiths, and statements and deeds of the Righteous Caliphs. Although in a country like India this order cannot be implemented, even then at the least a Muslim must know that if a husband becomes an apostate, it is not allowed for the wife to live with him; he will not get any share in inheritance after the death of his Muslims parents and close relatives; and his funeral will not be offered if he died as an apostate, nor prayers for forgiveness after his death will be made [to Allah], etc."

"Hazrat Zaid Bin Aslam Narrated That Prophet Muhammad Said:… Chop Off the Heads of Those Who Changed Their Religion (Islam)"

"Allah has discussed about some people of Bani Israel, the nation of Prophet Moses, that they had become apostates for worshipping the calf. Allah said about them: [Arabic words] … (Chapter Al-Baqarah, Verse 54) therefore, now seek forgiveness from your Creator and murder yourselves. The interpreters [of Koran] in interpreting this verse have written that those who had worshipped cows and become apostates were killed as per Allah's order by the hands of those people who had not worshipped the calf. After narrating the incident of these people, Allah says in the Verse 152 of Chapter Al-Araf: [Arabic words]… and this is the punishment I give those who slander…"

"In this verse [152 of Al-Araf], Allah has clearly ordered that an apostate by killed… In fact, the first interpreter of the Koran, Prophet Muhammad, has clearly ordered the killing of a person becoming apostate. About those causing conflict and mayhem on the earth, Allah says in Verse 33 of Chapter Al-Maidah: … [Arabic words here, the verse means: the penalty for those who wage war against Allah and His Messenger and strive upon earth to cause corruption is none but that they be killed or crucified…]; In the light of the statements and deeds of Prophet Muhammad, the interpreters [of the Koran] have written that this verse is also about people who become apostates. Therefore, Prophet Muhammad gave such a punishment to kill those shepherds for the crime of stealing camels from the Treasury… This incident has been discussed by Imam Bukhari [the collector of the Hadith] under the interpretation of this verse…"

"Hazrat Aisha, The Mother Of All Muslims [And Wife Of The Prophet] Narrated That Prophet Muhammad Said: [Arabic Words]… If A Person Leaves His Religion (Of Islam), Then Murder Him"

"* Hazrat Abdullah bin Masood narrates that Prophet Muhammad said: It is not right to shed the blood of a Muslim who testified that there is no deity but Allah and I [Muhammad] am his Messenger, except for being guilty of one of three points – i) to commit adultery/rape after marriage, ii) to murder someone, iii) if one leaves the religion of Islam and quits Millat [religious community or Ummah] – Sahih Bukhari, Sahih Muslim, Abu Dawood, Ibn Majah, Masnad Ahmad [all sources/collections of Hadiths].

"* Hazrat Usman bin Affan narrated that 'I heard Prophet Muhammad as saying:... shedding of a Muslim's blood is not permitted except for three cases – i) committing adultery/rape after marriage, ii) murdering a human being, iii) adopting Kufr [unbelief] after accepting Islam, then s/he will be killed – Nisai, Abu Dawood, Masnad Ahmad [all collections/sources of Hadith].

"* Hazrat Aisha, the mother of all Muslims [and wife of the prophet] narrated that Prophet Muhammad said: [Arabic words]… if a person leaves his religion (of Islam), then murder him – Musannaf Abdur Razzaq [the source for the Hadith].

"It means that there is no popular and authentic book of Hadith present which does not contain the prophet's order regarding killing an apostate if s/he doesn't seek forgiveness [and returns to Islam]."

"Hazrat Usman Wrote Back: Present the Religion of Truth [Islam] To Them; If They Accept, Then Let Them Go, Otherwise Kill Them"

"The Righteous Caliphs and Killing of Apostate

"Sheikh Jalaluddin Suyuti quotes Hazrat Umar Farooq as saying that after Prophet Muhammad died and some people became apostates in the areas surrounding Madina, then the caliph of the time Abu Bakr Siddiq rose up to kill them in obedience to the Shariah order [regarding apostates]. Due to the sensitivity of the time, Hazrat Umar Farooq was hesitating in killing them but Hazrat Abu Bakar Siddiq said that Prophet Muhammad has died and Wahi [the process of revelations on the prophet] is discontinued, I will continue to wage jihad against them [the apostates] as long as my hand can hold the sword – Tareekh-ul-Khulafa.

"After this incident, Hazrat Siddiq-e-Akbar [Abu Bakr] turned towards Musailma Kazzab who had been declared apostate due to having claimed himself to be a prophet… Therefore an army led by Hazrat Khalid was sent towards him and Musailma Kazzab was murdered – Fath-ul-Bari.

"Hazrat Abdullah bin Masood once captured an apostate group from the inhabitants of Iraq and wrote a letter to Hazrat Usman regarding their punishment. Hazrat Usman wrote back: present the religion of truth [Islam] to them; if they accept, then let them go, otherwise kill them. Similarly, Imam Bukhari has written that Hazrat Ali Murtaza killed some apostates – Sahih Bukhari.

Call For International Fatwas To Declare The Terrorists Who Advocate Wanton Killing Of Innocent People In The Name Of Islam As ‘Terrorist Apostates’, Like The Kharijites Of Early Islam