The Tragedy of the Arabs: A Civilisation That Used To Lead the World Is In Ruins—and Only the Locals Can Rebuild It

A THOUSAND years ago, the great cities of Baghdad, Damascus and Cairo took turns to race ahead of the Western world. Islam and innovation were twins. The various Arab caliphates were dynamic superpowers—beacons of learning, tolerance and trade. Yet today the Arabs are in a wretched state. Even as Asia, Latin America and Africa advance, the Middle East is held back by despotism and convulsed by war. 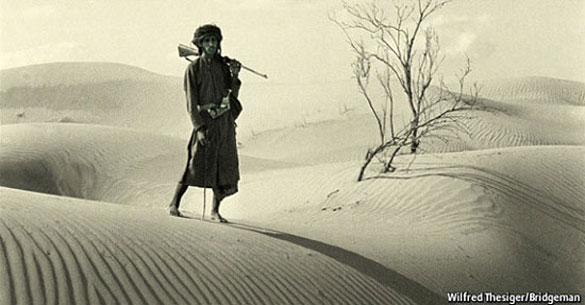 Hopes soared three years ago, when a wave of unrest across the region led to the overthrow of four dictators—in Tunisia, Egypt, Libya and Yemen—and to a clamour for change elsewhere, notably in Syria. But the Arab spring’s fruit has rotted into renewed autocracy and war. Both engender misery and fanaticism that today threaten the wider world.

Why Arab countries have so miserably failed to create democracy, happiness or (aside from the windfall of oil) wealth for their 350m people is one of the great questions of our time. What makes Arab society susceptible to vile regimes and fanatics bent on destroying them (and their perceived allies in the West)? No one suggests that the Arabs as a people lack talent or suffer from some pathological antipathy to democracy. But for the Arabs to wake from their nightmare, and for the world to feel safe, a great deal needs to change.

One problem is that the Arab countries’ troubles run so wide. Indeed, Syria and Iraq can nowadays barely be called countries at all. This week a brutal band of jihadists declared their boundaries void, heralding instead a new Islamic caliphate to embrace Iraq and Greater Syria (including Israel-Palestine, Lebanon, Jordan and bits of Turkey) and—in due course—the whole world. Its leaders seek to kill non-Muslims not just in the Middle East but also in the streets of New York, London and Paris. Egypt is back under military rule. Libya, following the violent demise of Muammar Qaddafi, is at the mercy of unruly militias. Yemen is beset by insurrection, infighting and al-Qaeda. Palestine is still far from true statehood and peace: the murders of three young Israelis and ensuing reprisals threaten to set off yet another cycle of violence (see article). Even countries such as Saudi Arabia and Algeria, whose regimes are cushioned by wealth from oil and gas and propped up by an iron-fisted apparatus of state security, are more fragile than they look. Only Tunisia, which opened the Arabs’ bid for freedom three years ago, has the makings of a real democracy.

Islam, or at least modern reinterpretations of it, is at the core of some of the Arabs’ deep troubles. The faith’s claim, promoted by many of its leading lights, to combine spiritual and earthly authority, with no separation of mosque and state, has stunted the development of independent political institutions. A militant minority of Muslims are caught up in a search for legitimacy through ever more fanatical interpretations of the Koran. Other Muslims, threatened by militia violence and civil war, have sought refuge in their sect. In Iraq and Syria plenty of Shias and Sunnis used to marry each other; too often today they resort to maiming each other. And this violent perversion of Islam has spread to places as distant as northern Nigeria and northern England.

But religious extremism is a conduit for misery, not its fundamental cause (see article). While Islamic democracies elsewhere (such as Indonesia—see article) are doing fine, in the Arab world the very fabric of the state is weak. Few Arab countries have been nations for long. The dead hand of the Turks’ declining Ottoman empire was followed after the first world war by the humiliation of British and French rule. In much of the Arab world the colonial powers continued to control or influence events until the 1960s. Arab countries have not yet succeeded in fostering the institutional prerequisites of democracy—the give-and-take of parliamentary discourse, protection for minorities, the emancipation of women, a free press, independent courts and universities and trade unions.

The absence of a liberal state has been matched by the absence of a liberal economy. After independence, the prevailing orthodoxy was central planning, often Soviet-inspired. Anti-market, anti-trade, pro-subsidy and pro-regulation, Arab governments strangled their economies. The state pulled the levers of economic power—especially where oil was involved. Where the constraints of post-colonial socialism were lifted, capitalism of the crony, rent-seeking kind took hold, as it did in the later years of Egypt’s Hosni Mubarak. Privatisation was for pals of the government. Virtually no markets were free, barely any world-class companies developed, and clever Arabs who wanted to excel in business or scholarship had to go to America or Europe to do so.

Economic stagnation bred dissatisfaction. Monarchs and presidents-for-life defended themselves with secret police and goons. The mosque became a source of public services and one of the few places where people could gather and hear speeches. Islam was radicalised and the angry men who loathed their rulers came to hate the Western states that backed them. Meanwhile a vast number of the young grew restless because of unemployment. Thanks to the electronic media, they were increasingly aware that the prospects of their cohort outside the Middle East were far more hopeful. The wonder is not that they took to the streets in the Arab spring, but that they did not do so sooner.

A Lot of Ruin

These wrongs cannot easily or rapidly be put right. Outsiders, who have often been drawn to the region as invaders and occupiers, cannot simply stamp out the jihadist cause or impose prosperity and democracy. That much, at least, should be clear after the disastrous invasion and occupation of Iraq in 2003. Military support—the supply of drones and of a small number of Special Forces—may help keep the jihadists in Iraq at bay. That help may have to be on permanent call. Even if the new caliphate is unlikely to become a recognisable state, it could for many years produce jihadists able to export terrorism.

But only the Arabs can reverse their civilisational decline, and right now there is little hope of that happening. The extremists offer none. The mantra of the monarchs and the military men is “stability”. In a time of chaos, its appeal is understandable, but repression and stagnation are not the solution. They did not work before; indeed they were at the root of the problem. Even if the Arab awakening is over for the moment, the powerful forces that gave rise to it are still present. The social media which stirred up a revolution in attitudes cannot be un-invented. The men in their palaces and their Western backers need to understand that stability requires reform.

Is that a vain hope? Today the outlook is bloody. But ultimately fanatics devour themselves. Meanwhile, wherever possible, the moderate, secular Sunnis who comprise the majority of Arab Muslims need to make their voices heard. And when their moment comes, they need to cast their minds back to the values that once made the Arab world great. Education underpinned its primacy in medicine, mathematics, architecture and astronomy. Trade paid for its fabulous metropolises and their spices and silks. And, at its best, the Arab world was a cosmopolitan haven for Jews, Christians and Muslims of many sects, where tolerance fostered creativity and invention.

Pluralism, education, open markets: these were once Arab values and they could be so again. Today, as Sunnis and Shias tear out each others’ throats in Iraq and Syria and a former general settles onto his new throne in Egypt, they are tragically distant prospects. But for a people for whom so much has gone so wrong, such values still make up a vision of a better future.