Finding Islam in the Hindu Heartland

More than 700 years ago, a Muslim saint was born in India, who laid the foundations of an Indian Islam.

Today, that faith seems to be reverting back to the harshness of the Muslim invaders, who came from Arabia, Persia and Central Asia to plunder the sub-continent. 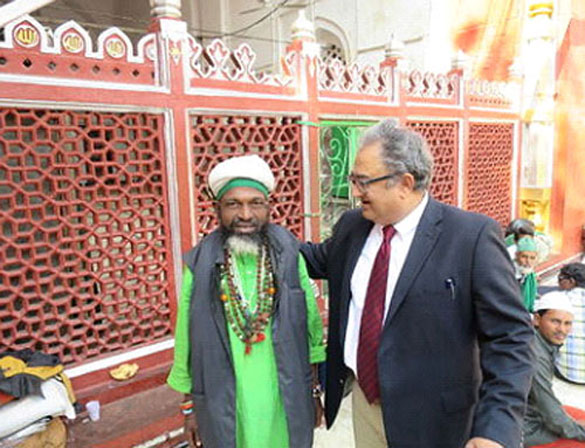 Columnist Tarek Fatah with a Dervish at the 'Dargah' of the 14th century Sufi Saint Nizamuddin Auliya in Delhi, India.

We Muslims of the Indian subcontinent know this saint as Nizamuddin Auliya, a Sufi who died in Delhi in 1325.

Last weekend, I went to his grave, his “Dargah”, to pay my respects to a man we need to bring back to life.

That is, if we Muslims wish to take back our future from the misery so many have embraced in our joyless lives of anger, bereft of music and laughter.

That anger seems to have enveloped us, as if a Burqua had been thrown over our souls.

After all, where else in the Islamic world would you find a holy Islamic site where musicians would be singing songs while playing harmoniums?

Where Hindus and Sikhs would freely mingle with Muslims?

Not in Cairo or Baghdad, certainly not in Islamabad or, dare I say, Mecca.

I stood beside the grave as a white, American; non-Muslim explained to me the intricacies of the architecture, while a Sikh friend was free to take photographs, without being frowned upon by anger-filled, self-righteous defenders of the faith.

So who was Nizamuddin Auliya of the 14th century and why do I want him to rise from his grave to salvage my Muslim community?

By contrast to today, when the clergy of Islam often brandish machine guns and wave swords demanding the establishment of Islamic states, Nizamuddin Auliya had nothing but disdain for political power and what we now call political Islam or Islamism.

One story alone illustrates the piety of Nizamuddin Auliya.

He is believed to have said, “My Khanqah (home) has two doors. If the Emperor enters through one, I will leave through the other.” This does not mean the Saint was a monk-like pacifist.

He used his influence to create political resistance as a vehicle for his messages of humility, mercy and religious tolerance.

While the rest of the Islamic world’s caliphs and sultans were exploiting non-Muslims by imposing on them their second-class Dhimmi status and levying the Jiziyah tax, Nizamuddin was on record rejecting the concept of differentiating people on the basis of religion or race.

He said, “We are all God’s Dhimmis. No human being can be another person’s Dhimmi”.

This secular universalism in Nizamuddin’s teachings appealed directly to the marginalized of society, making his home a haven for people of low social status and class, including Hindus who were persecuted under Muslim sultans.

Compare that to the Muslim leadership of India today and one wonders what has happened to my saint’s legacy.

Here is what one of India’s most prominent Muslim clerics, Kanthapuram AP Aboobacker Musaliyar, the general secretary of the All India Sunni Jam-Iyyathul Ulema, recently told a newspaper:

“Muslim women should not work in a place where only a woman and a man are present. They should go for a job only in a place where there are enough number of women and trustworthy men. About 90% of jobs do not require man-women mingling. These rules cannot be changed. The obstinacy still continues.”

Rise from your grave O Nizamuddin Auliya of Delhi, your nation cries out for you.