Challenge Stereotypes of Islam and Arabs 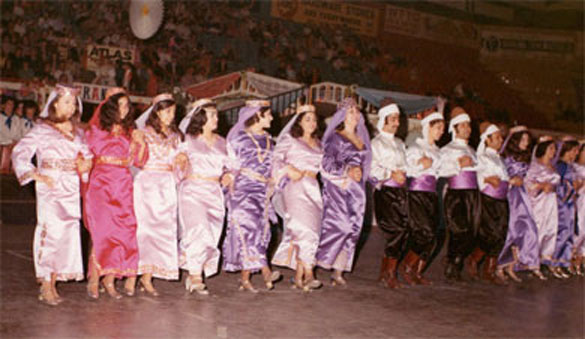 The Arabic Dancers of the Toledo Mosque, circa 1969-70, from the film “A Thousand and One Journeys: The Arab Americans.” Credit Zeitoune FilmWorks/The Islamic Centre of Greater Toledo

Those who visit “Wondrous Worlds: Art and Islam through Time and Place” at the Newark Museum may also be interested in a screening of “A Thousand and One Journeys: The Arab Americans,” an award-winning documentary currently on the festival and screenings circuit.

Then again, they may not be.

Grouping together Islam and the Arab-American experience is precisely what the curators of the exhibition and the executive producer of “A Thousand and One Journeys” hope people will not do.

Myth-busting is a goal of both undertakings, whose paths converge only in that they hope to engage New Jersey audiences.

Abe Kasbo, who grew up in Paterson and is the executive producer of “A Thousand and One Journeys,” said that when he tells people that he’s from Syria and a Christian, they are often stumped. “They just assume I’m Muslim,” he said. “There are so many misconceptions out there about what it means to be Arab-American.”

Mr. Kasbo started pooling funds to make his first documentary in 2007 after what is now known in his family as “hummusgate.”

“My son was at day care; he was 3 or 4 and somebody made a face and said something to him about his hummus sandwich,” Mr. Kasbo said. “It brought me back to when I first came here from Aleppo as a 10-year-old, and the same sort of stuff happened to me. Now it’s 36 years later, and nothing has changed. Now we have Trump talking about Muslims and Arabs.”

Part of the appeal of the 90-minute film is the help Mr. Kasbo recruited in telling it: Former Senator George J. Mitchell, the actor Jamie Farr, the political activist Ralph Nader and the journalist Helen Thomas, who died in 2013, all of Lebanese descent, make appearances.

Of particular interest to New Jersey audiences may be the movie’s discussion of the Paterson silk mills, and the Arabs who settled in the area to work in them in the late 19th and early 20th centuries. “They were textile workers back in Syria and Lebanon and Palestine. They helped build those industries,” Mr. Kasbo said.

In addition to the misguided notion that all Arabs are Muslim, Mr. Kasbo addresses other pet-peeve fallacies in the film, including the idea that Arab-Americans come from unsophisticated cities.

“Aleppo is as cosmopolitan as New York, but people think its backwoods. It’s ridiculous,” he said of Syria’s largest — and currently war-torn — city.

Both cosmopolitan cities and rural edges of the earth, from Africa to Australia, are represented in the “Wondrous Worlds” exhibition; the only continent without a presence here is Antarctica.

“One of the very unusual things about this exhibition is that we’re featuring works from all over the world, not just the Middle East,” said Katherine Anne Paul, lead curator of the exhibition and the curator of Arts of Asia at the museum. “I think there’s a lack of awareness of how expansive and far-reaching the world of Islamic art is.”

The 120 pieces on display date from the ninth century and are drawn from the museum’s vast collection of 275,000 objects, including carpets, costumes, jewellery, ceramics, prints, paintings and photographs.

Nations heavily represented include Turkey, Morocco, Algeria, Iran and India. But France, China, the United States, Indonesia, Malaysia and many other countries make appearances, too — some more lavishly than others. For example, from Uzbekistan and Tajikistan is an embroidered, sequined horse cape dating to the late 19th or early 20th century.

“This was how you pimped your ride back then,” said Dr. Paul, whose co-curator for the show is Kimberli Gant, the museum’s Mellon Curatorial Fellow of Arts of Global Africa.

Ties to Islam are not always obvious in “Wondrous Worlds.” Prestige garments like the horse cape, for example, might seem opposed to the modesty of dress Islam encourages, such as the simple 19th-century Sudanese tunic that is on view beside it. But in the secular Islamic world, such items marked social rank in public life.

Wall text throughout the sprawling show helps connect the dots. So does the show’s division into sections. In addition to “Modest Beauty: Dress, Fashions and Faith,” the section with the tunic and horse cape, “Wondrous Worlds” explores the Quran and calligraphy and book arts; hospitality and the domestic arts through objects like ceramics and musical instruments; architecture and its offspring, such as tiles; and the intercontinental trade nurtured by the hajj pilgrimage.

The rarest item displayed is a knotted Egyptian prayer rug from the early 17th century. “There are only five known similar examples,” Dr. Paul said. “What distinguishes it is the quality of the materials — fine silk, wool and cotton — coupled with the specific format that was most likely drawn in the Ottoman court,” she said. A section of the rug is worn, she added, probably from daily prayers.

When the show opened in February, Dr. Paul expected controversy, but she hasn’t encountered any, perhaps because of her guiding principle.

“My primary goal in presenting anything is, ‘Look, we’re all people, and this person thought about creating this thing this way because they live in this place in this time and have these resources,’” she said. “One of the great things about art is it can speak to the basics of humanity. That’s what I hope we did here.”

“Wondrous Worlds: Art and Islam Through Time and Place” is at the Newark Museum, 49 Washington St., Newark, through May 15. For information: 973-596-6550 or newarkmuseum.org.

“A Thousand and One Journeys: The Arab Americans” will be shown at Sacred Heart Armenian Catholic Church, 155 Long Hill Road in Little Falls, on April 10 at 2 p.m., and on May 19 at the Paterson Museum, 2 Market Street, Paterson. For more information: arabamericandoc.com.