Will Imran Government Arrest the Man Who Tutored His 4-Year Son to Threaten Hindus? 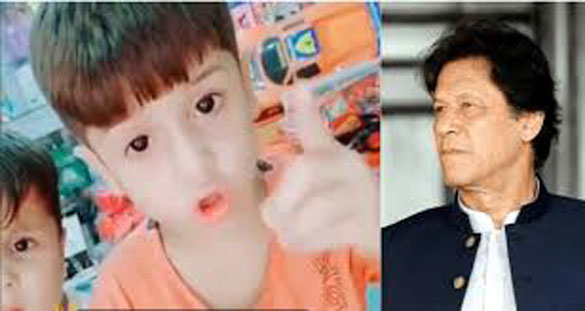 It was an ideological debate that was raging in the country and both the supporters and opponents were presenting their arguments. But the issue took an ugly turn when a video of a four-year-old boy addressing Imran Khan and telling him that if the temple was built in Islamabad, he would kill each and every Hindu. The child's father was beside him and apparently, he tutored his kid to threat the Hindus as he proudly approved of his minor son's threat.

This incident has sparked off protests and reactions from both Hindu and secular and sane Muslim communities. This is in sheer violation of not only of the Constitution of Pakistan but also of the Islamic principles.

The Hindus had been demanding the temple in Islamabad for a long time and the government of Pakistan had conceded to their demand within the purview of the law of the land. The matter was now with the Ideological Council and the issue would have been decided according to the law. But that a Muslim, tutors his four-year son to issue threats to kill Hindus shows the moral degradation of the Muslims of Pakistan. The Quran asks Muslims not to leave the path of Justice in the enmity of a community. The Quran also asks Muslims to inculcate among their children good morals and values and treat the minorities with respect and love. The wellbeing and protection of the minorities is the responsibility of the Islamic state. No Muslim can threat the members of the minority community in any manner. If he does so, he will be booked under the Islamic Law.

This is not the first incident of the show of hatred against Hindus and India. In October 2019, during a programme in Karachi, the Jamiat-e- Talaba-e-Pakistan had encouraged students to spew venom against India.

This incident has once again demonstrated the fact that the ideology of violence has spread its tentacles deep down in the Pakistani society and small children are filled with hatred of other religions. This hatred is causing immense harm and damage to its own society as Pakistani Muslim society is divided into sects and sub-sects, each baying for the blood of others. Hatred does not harm others but the hater itself.

Let's recall that around two months back, anti-Muslim comments were being made in the social media by some communal minded Hindus in the Gulf states. The governments of the gulf countries took strict action against them. Some Arab Muslims also posted communal comments against the Hindus. The government arrested those Muslims as well and booked them against the same laws. This prevented other Muslims to show hatred of the Hindus. This was done in the interest of their own Arab society because if the Islamic governments had allowed Muslims to post obnoxious and hate filled comments against Hindus, it would first harm their own collective moral character which would be harmful for their own society in future.

By allowing Hindus to say what they want against Muslims in India and allowing Muslims to say or do what the Muslims want against Hindus or other religious minorities in Pakistan, the governments in both the countries are actually pushing the Hindu and Muslim societies in India and Pakistan to the mire of moral and social degradation. The result was that when an 8 year old Muslim girl was raped by Hindus in Jammu last year, the common people had rally in support of the rapists and in Pakistan when Mumtaz Qadri was sentenced to death for killing a Muslim politician, Salman Taseer, he was made into a saint by the common Muslims.

Therefore, if Imran Khan really wants to prevent the spread of hatred and culture of violence among the Pakistani children and youth, it should order the arrest of the man at whose behest, his son threatened to kill Hindus. It would be in the interest of the Muslim community of Pakistan and would also save the global Muslim community of the embarrassment the viral video has caused to them. But can we expect this from a Prime Minister who openly said that Osama bin Laden was a martyr and not a terrorist?