3.    In India, old age homes in Bangalore, Hyderabad and Vadodra are run by Muslims.

4.    Many old Muslim people land up in these old age homes. 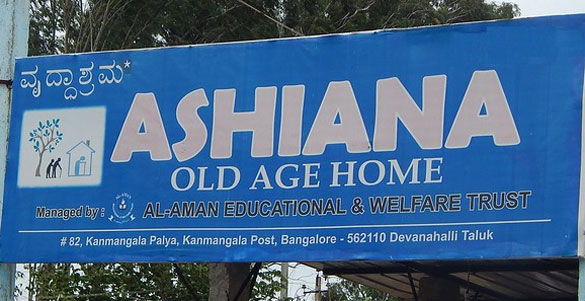 Old Age Homes were said to be the product of the modern western society where nuclear family system did not have room for the elderly parents. It also existed in the non-Muslim societies of India where busy sons and uncaring daughters-in-law did not have any love and affection for the elderly people and so they left their elderly parents in old age homes. The subject of old age home was a taboo in the Muslim society because according to Islam a family is not complete without elderly parents. Islam enjoins on Muslims to treat well their parents and take care of them when they reach old age.

"And We have commanded people to honour their parents. Their mothers bore them through hardship upon hardship and their weaning takes two years. So be grateful to me and your parents. To me is the final return." (Luqman: 14)

Another verse also enjoins the Muslims to be good to the parents.

“Be good to your parents and should both or any one of them attain old age, do not say even "fie" to them but speak to them with respect."(Isra: 24)

According to a hadith in Sahih Muslim the holy prophet pbuh said that cursed was the one who found his parents in old age and did not serve them.

According to another hadith in Sunan Tirmidhi, if parents are pleased with one, God is pleased with him and if parents are displeased, God is displeased. In Islam, paradise is under the feet of the mother and the father is its gate. During the life of the prophet pbuh those who had elderly parents to take care were exempted from going on jihad.

All these verses and hadith make service to the parents a fundamental duty of every Muslim without fulfilling which he or she cannot attain salvation.

This is the reason old age homes were thought to be an alien subject among the Muslims until a few years back. Elderly parents were taken care of in the family and were an essential part of the family. And the general notion was that old age homes did not exist in Muslim societies.

However, not many Muslims are aware that old age homes not only flourish in Islamic countries like Bangladesh and Pakistan but are also run and managed by the social welfare departments of the Islamic countries.

In Bangladesh too, old age homes are a reality of the modern times and so they are run and managed by the social welfare department of the government. Prabeen Hitoishi Sangha has 80 branches countrywide. The disintegrating family structure in the Muslim society due to urban development and socio-economic challenges, family relationships have suffered and old parents have suffered the most. In some cases, the elderly mother is compelled to leave the house because of the oppression, harassment and mental and physical torture by the daughter-in-law and the son finds himself helpless. In some cases, the son sends the parent to the old age home and pays a legitimate sum of money on monthly basis because he does not want an ailing parent in the house. This is an unfortunate aspect of the modern Muslim family. Sometimes, illiterate or old parent leaves the house without telling his or her son and is rescued by the police and brought to an old age home.

However, there are some old men who happily choose an old age home because they feel lonely as their son lives separately. They do not have any grudges against their family.

However in these old age homes, there are many who are not old but young people who do not have anyone to support. They are mentally sick people, or paralysed or with other disabilities. There are young girls who have been abandoned by their married brothers. Unmarried and childless old people who do not have any one to support them also land up there.

In India too, old age homes for Muslims have come up due to the changing social scenario. Ashiana Old Age Home in Bangalore and Fatima Old Age Home in Hyderabad are two such homes. Fatima Old Age Home is a secular home but the majority inmates are Muslims. There are many Muslim families who abandon their parents despite wealth and prosperity only because they do not want an ailing mother or father in the house. There are many families who cannot take care of their parents because both the spouses work and cannot provide care for them. Some parents are left lonely because their sons have settled abroad with family. However, there are men in Bangladesh and Pakistan who happily leave their parent in an old age home only because they do not want quarrels between the mother-in-law and daughter-in-law. They pay monthly to the home for the services and occasionally visit them. This cannot be justified by any means.

In short, the mind-set of the Muslim society is changing in face of fast the changing socio-economic conditions. Age old and much boasted Islamic family values have lost significance among the rich and the upper class Muslim society and they consider their old patents az burden and a liability.