When did Baghdad Become a Sanctuary for Patriarchy? 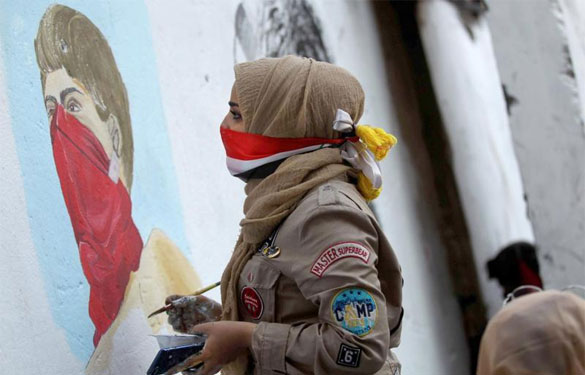 A watershed in history. An Iraqi protester paints on a concrete barrier on al-Rasheed Street in Baghdad (AFP)

Female activists in Baghdad gathered at Parliament to protest a proposed Ja’fari Personal Status Law which will permit the marriage consummation for girls as young as nine-years-old. The women wore black, to mourn the regression of women’s rights in Baghdad. It is perhaps strange that with the fall of Saddam Hussein women’s rights have regressed, as opposed to progressing. While other countries’ judicial systems attempt to elevate the status of women by ensuring they are treated equally before the law, in Baghdad women’s rights violations are sanctified through the law.

What was perhaps the most saddening part of the protest was the low turnout, the lack of male presence to stand by women in the fight against patriarchy. Instead, a few women gathered, all of them were from the ‘older generation’ and they held homemade placards. It is no surprise that the current political climate in Iraq deters women, especially young women, from feeling comfortable enough to become socio-politically active.

Patriarchy is on the rise in Iraq because of the influx of religious thought which is not only interpreted at the expense of women’s rights but also heavily influenced by sectarian, as well as cultural, beliefs. When society fails to recognize the human rights of women, you would be correct to assume that a higher law, applicable to all citizens, would enshrine such rights. But unfortunately this is not the case for Iraq.

Women are often imprisoned or held in detention without trial simply to harass a male member of their family, or to induce confessions from other suspects. Through no fault of their own, they are victims of a state in decline. According to a recent report published by Human Rights Watch, the abuse of women by Iraqi security forces and judiciary are commonplace. The report mentions two women who became pregnant because of rape and the sexual assault they were forced to endure while in prison.

Consequently, Iraqi women cannot use the current judicial system to fight for their rights and they are not protected legally. Instead, recent proposals of the Ja’fari personal status law will further regress any progress on women’s behalf in Iraq. This is because the proposed draft law is based on patriarchal religious thought, which many would argue has no place in Islam or in any civilized society.

Article 104 of the Ja’fari personal status law stipulates how a husband should allocate his time for his wives, and specifies no conditions of polygamous marriages, despite existing laws which necessitate the approval of a judge to marry another woman. What is worse, Article 101 of the law permits men to have sex with their wives at any time of their liking, without taking into account the wife’s wishes. This amounts to rape, according to the second article of The Declaration on the Elimination of Violence Against Women.

The draft law also specifies that a woman is not allowed to leave the marital home without prior permission from her husband.

In contrast to this horrific law, Kurdish women are progressing forward on all fronts. Although patriarchy exists throughout the Middle East, the degrees to which women’s rights are limited -- and their social activities restricted -- varies.

In much of Kurdistan, women enjoy far more rights and freedoms than women in the Arab regions of Iraq, because regardless of how the Kurdish judicial system is perceived there are laws that are set out to protect women. There are also non-governmental organizations that provide free legal aid to women who lack financial backing to take their cases to court.