Sydney Bride Visits Siege Memorial: ‘A Small Step for a Muslim Bride and a Giant Step for the Muslim Community’?

Now that the floral tributes to the victims of Sydney Siege are being cleared, it is appropriate to pick this particular event among the special tribute by a Muslim ‘Bride’ of the day at the site in her bridal gown. For this the event stood out on its own. 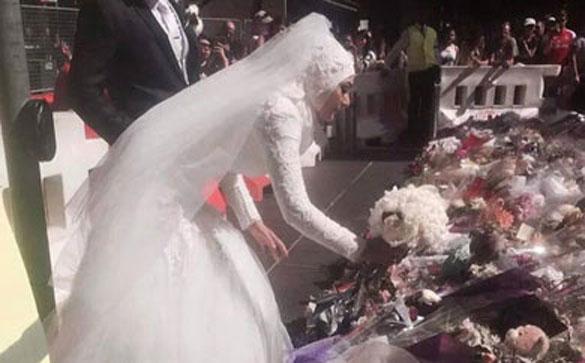 “As the Sydney siege memorial grows, a Muslim bride has made a pilgrimage to Martin Place on her wedding day. When Ms Kassem laid her wedding bouquet onto the ground, they applauded!”  The media reported.

Though there were many Muslims in normal dress who had placed bouquets at the site but the media often picked the distinctly “Islamic “ dressed Muslim women in the crowd. This singled out a community of people who otherwise would perhaps have been noted by its absence at a national floral memorial site.

This single gesture added to the publicity of Australian Muslims taking part in an event that the Sydneyite in particular and the nation in general felt deeply about.

A wedding day is a busy day for any couple married on the day and to spare some time out of that day is an applaud-able gesture. The tossing of the bouquet into the crowd of wedding guests is a custom in the Western tradition, but she did not do that. Thus she broke two traditions to pay tribute at the site as a Muslim bride.

This, the crowd at Martin Place appreciated and applauded when the bride placed her bridal bouquet along the river of flowers.

Could this not be interpreted as ’a small step for a Muslim Bride and a giant step for the Muslim community’?

Considering it is the season of good wishes and close to the national Christmas holidays, it adds to the significance.

The community perhaps is maturing to be part in the spirit of things to register their Australian identity in the nation?

Are Muslims changing in their attitude by placing bouquets at the site of two Christians, murdered “by a deranged and fake Muslim priest”?

The café owner where this siege had taken place tried to wrest the gun from the priest’s hand and as result him and a lady customer were killed.

Since priesthood has no place in their Faith and therefore ‘a fake Muslim priest’ is a tautology of a sort.  Did she then register this fact by her gesture in her bridal Muslim dress?

Or sceptics would say- it was a gesture by a Muslim girl to grab publicity? Don’t all brides in the world want little bit of publicity on their wedding day?

Or even an aberration they might say. A once-off act by a community, now tainted with negative publicity for savage acts committed by their fellow Muslims and in the name of their faith?

ll sorts of doubts will prevail, but one can be sure that the Bride and the Groom were genuine in paying the tribute the way they did on their wedding day.

It therefore shines a light at the end of a tunnel for this country for Muslims, to be one with the nation, for it was a national outpouring of grief and for the reason that this country has given sanctuary “for those who have come across the seas”.

How very appropriate these words are, taken from the Australian National Anthem, for everybody in the crowd there or their forefathers came from across the seas.

Who indeed has not come here from across the seas, including the early British colonisers and settlers just two and a half centuries ago. The archaeologist/historian say that even the indigenous Aboriginal people had come across the seas forty to sixty thousand years ago.

For sure, because this country is indeed “girth by sea”.

Recently there were conferences held by the Prime Minister and also Premiers of States with ‘Muslim Leaders’ to reassure the Muslim community that they need not be worried about the reinforced terrorism laws in the country and that they are not specific targets of these laws.

But why are religious leaders, the priests, Maulanas and Muftis the Muslims’ professional leaders and representatives? How can they be when they have no basis in the Muslim scheme of things?

That is the tragedy for the community that their political leadership is dependent upon the church based hierarchy which in itself is out of place. Therefore a felony is further compounded! Were Manal and Mahmud pointing this out?

Muslims as a community have contributed hugely to the making of this country. The Indonesians, Malays, the Afghans camel drivers, the Turks and many professionals from other Muslim countries have made and are making their silent contribution.

Initially, for the first generation though, this was not based on migration to be a part of the nation-Australia, but a second country where one came to earn a living and go back to where one came from.

This contribution is largely ‘hooded upon’ by the events taking place round the so called Muslim world.

Not only the Muslims but also the other races from across the seas, even the English for example had the same attitude. The older generation when going on holidays would say “we are going home”! Australia was a convict country even though many of them were brought here as such.

It was not uncommon to come across Europeans living in the country for decades who have not taken up citizenship of this country.

But Muslims today have to prove their bona fides more vigorously than ‘others’.

There was time when the others too had to go through such times. The Irish, the Chinese, the Japanese, the Germans and the Yugoslavs, who had contributed immensely to the development of this country, had to face barrage of racial discrimination of one sort or the other.

The difference with Muslims is the proverbial modern phenomenon of Terrorism round the world and therefore of being branded the enemy with-in; that is, of being a traitor. A charge good enough to frighten even the best of Australians.

But then, the Germans, Japanese and the Yugoslavs communities too had to face the same mistrust during the world war years. But time and some commonness of theirs with the ruling class have patched those political differences.

Now there are people from many migrant communities amongst the ruling class too. Thankfully at last, including the Indigenous and Muslim politicians representing their communities in the national and State parliaments.

The commonness, the Australian-first followed by being a Muslim-ness of theirs that has made it possible to overcome the mistrust of their mixed constituents who voted them in.

The case in point is of a federal MP who took the Quran with him during the swearing in ceremony.

There was adverse reaction in some quarters to his action. He calmly pointed out that Australia is a secular State and other MPs too swore on the Bible.

It takes political maturity to act in politically correct manner! Clergymen do not have that acumen.

All this brings out two important features of home grown Australian generation:

One is that the going back home as in the older generation is not an option for many young people.

And secondly the commonness of this Muslim generation happily ‘wrapping themselves in Australian flag’, with all its nuances is now a common feature; to the extent that in minor conflicts too the young ones demand “I am an Australian as much as you are”.

The religiousness does not seem to play any part in being Australian first.

With the first comers, this change is not possible as all sorts “baggage” of prejudices and ignorance they bring with them from whence they come is still heavy on their shoulders.

It is up to the government policy makers to help them discard it at entry point into the country. This should apply to all migrant receiving countries of the West.

Manal and Mahmud’s singular act at Martin place therefore augers well to the next generation of Muslims. As one person there put it – "She did it out of respect for her country that will one day be the country of her children and grandchildren."

Many will say Amen to it.

Let us wish Manal and Mahmud a successful married life and many a happy new years to come.