Muslim Knowledge Blockage and its Illusive Cure: The Poetic and the Practical Solution

Reams of paper and litres of ink have been used over the years on the subject of Muslims’ knowledge blockage to follow Quranic exhortation to contemplate (eg. 3:191) nature’s workings (eg.30:20 to 27); in order to acquire scientific knowledge and thus to understand their place in the world. The diagnosis is now well-known but the cure is illusive.

To rehabilitate the body from the above brain-clot is extremely slow, and where there are signs of doctors of knowledge attempting to offer treatment (for example in modern times the practical Syed Ahmad Khan); the armies of religious opposition led by the so called Ulema, divert the nation to quackery of religious hospitals called madrasa—places where only ‘rote-lessons’ are given, which are not remotely concerned with acquiring scientific knowledge as called for in Quran. The result is regression into ignorance and reversing into dark ages of the nation of Muslims.

Lack of wisdom has given rise to such days- that dwarfed mankind yet elongated its shadows!

It is appropriate therefore to quote the thoughts in its precis form of a scholarly medical practitioner, doctor Arif Sarwari who said: “(Quite a few Muslims) that are trained in and practice the 'sciences' such as medicine pay particular homage to the Quranic principle of learning from nature and include the fundamental principles and theories that serve as the bedrock of science for the benefit of society.

The actual practice of clinical medicine during states of disease is ideally the self- actualization of physicians that have mastered the need of “continuous learning”(see Maslow’s Hierarchy of Needs) and then apply this as an art form to the benefit of their patient so as to either restore health (ideally) or alleviate suffering of the patient.”

This was manifestly true of early Muslim scholars, too many to name, but acknowledged universally for their contribution, who took the message of Quran to heart and lit hundreds more lamps to further illuminate the libraries of accumulated knowledge of mankind. As the saying goes “they saw even further, riding on the shoulders of the giants”; the giants from China, India, Persia and Greece.

Acquisition of knowledge is a continuous process in enlightened societies which advance acknowledging unashamedly the contribution of the other nations.

The Muslim nation however is lulled into singing the glory of their forefathers’ scholarship as if it was acquired in vacuum. Many Muslims have been reminding the world for centuries. Iqbal the poet then questions this false pride:

They were your forefathers, but what are you? Sitting on your hands waiting for resurrection. 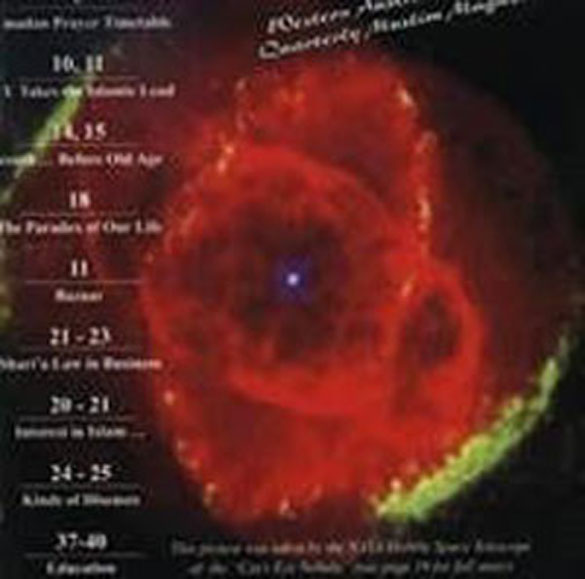 When NASA, decades ago published this coloured picture of a galaxy, there was a flurry of celebrations: ‘See! This has been in Quran, for fourteen centuries and quoting some translations as: “when the heavens are rent asunder it will appear like red rose 55:57”. Why then Muslim scholars not take this picture, even a year before NASA? Because majority of Muslim Universities do not have even a toy telescope to comply with 3:190!

Not only the generation of Muslims that followed has gone into trance, hypnotized by the vibrations of the ‘been’ - snake charmer’s flute, the meaningless incantations of religious mantras, but also the modern scholars caught up in the spiritual opium den as well.

After centuries of being in intellectual coma, Sayed Ahmad Khan did something practical for Muslims of the subcontinent of India by establishing a modern university, prompting another reform poet Akbar to exclaim:

—Ours is lot of expired air, Syed was the one who toiled.

Here and there, others too, and in other countries followed suit. Just a few grains of wisdom on the vast beaches of Muslim world that is equal if not more wealthier than the West, where universities abound going back a thousand years. For them the continuous process of advancing scientific knowledge is what has made it great and not the empty rhetoric of the achievement of their ancestors. And the West is where Mujahideen, some in the guise of refugees flock to now.

Those houses of learning – Dar ul U’loom – which were universities in true sense in the early Muslim times, propagating knowledge and enlightenment; thanks to the latter-day Ulema were turned into houses of rote-learning of religious scripts and churning out, Aa’lim, Mufti, Maulana, Hafiz and what have you.

In Iqbal’s words again, these companions of Iblees/Lucifer/Satan were advised by him to keep the Believers so occupied and at bay by:

Keep them entranced in worship till the daybreak—(and) firmly establish them in the culture of monasticism.

Over the millennium Satan’s companions certainly have successfully accomplished the task allotted to them. They have gone even further and in practical sense. In the name of their concocted religions for political strategies, the young ones are recruited to join the army of Mujahideen with religious fervour to revive what was their past glory, not of knowledge-based nation, but warmongering marauders.

Some of their leaders strangely also hold professional doctorates from various religious and non-religious universities.

They and their armies have been fully engaged, in cahoots with their so called friends to destroy, nay, turn to dust, not just the centuries old cities where universities thrived; as did the Mongol hordes of thirteenth century, but today whole countries where their own brethren had lived, sending them by the millions, men women and children to refugee camps to be fed on handouts supplied by their enemy-friends.

Let alone ancient human heritages going back centuries preserved by their forefathers, for younger generation to acquire knowledge of history of past nations as required by Quran, and their once beautiful cities proclaiming their advance civilisation and culture, are now raised to the ground; the human lives of their own people too are savagely destroyed, …in the name of a blood thirsty deity—the Allah Akbar, the great god, contradicting the same book!

What then is the cure required to shake the Muslim nation out of the ignorance that has lulled them into this coma?

The answer is as complex as the question is intriguing. As said earlier, the leaders of these religious warriors are …to put it mildly scholars of some sort. PhDs even in the discipline of sciences, and learned Aa’lims in religious subjects!

May then it be asked as to where does the enlightenment imparted by knowledge of nature end and savagery of religious scholarship as applied to politics begin?

How come they act like savages in politics? And how come their savagery is committed in the name of religion they call Islam? Where from have they acquired their knowledge of the very Deen- Islam’s highway code of life advocated for mankind – that commands its professed followers the maintenance of peace and harmony in the world? Fellowship and one nationhood of mankind, including women-kind, without the humiliation of the face covering hood, 10:26, 27!

It seems Iqbal knew the answer to these complex questions. May be he was too far ahead of his time for Muslims, the scholars and the ignorant alike to grasp his interpretation of Deen, hence the fatwa on him of being a Kafir:

Whether it be the power of monarchy or the showbiz democracy—when Deen is excised from politics, what remains is Genghis-ism (savagery)!

So there we have it. Professional trade scholarship does not equate to ENLIGHTENMENT he says. But Dr Iqbal sir, you said:

Time is nigh to establish the rule of Democratic government – who so ever you find following the ancient ways, DESTROY!......What? Do you mean Exterminate? Send in the Daleks?

(False) Democracy is a form of government where—people are counted but not assessed.

Assessed by whom? The leaders, the scholars or the people who elect and follow them? But Sir, you maintain that they are unenlightened: