Juma’ Is Not Ordained a Muslim Holy Day or a Holiday

Most major religions of the world have a day in a week designated as a holy day for the worship of their particular deity. The Muslim world keeping in step with it, has chosen Friday, the sixth day – يومالسادسof the week as a holy day for itself and named it Juma’, the day of gathering.

The day before Friday, that is Thursday, is called خميس  the fifth day. All days are given numbers.

The root of Juma’ comes from JMA’ and is a derivative of jamaa’-come together, congregate, assemble. In the days of Messenger Muhammad, it was any day the small community was needed to gather for a meeting to discuss important matters affecting the community and decide on the action to be taken.

A call was put out for this purpose for people to attend, which later became the ritualistic religious Adhan, a call for prayer.

The three verses 9, 10 and 11 of Chapter 62, “ Juma’ “ are quoted here to establish the above argument, that is to say that Juma’ is not a specific holiday of the week nor is it supposed to be a holy day for cessation of activities and business for mankind.

62-9- Oh you who believe, when you are summoned on the day of congregation, make haste to be there for Almighty’s remembrance and leave all commercial activities. That is better for you if you but only knew.

“Make haste”: to be there on time to participate fully in the business and not half way through or part of it.

“Leave all commercial activities”, Stop all activities for a while to attend the meeting.

“Almighty’s remembrance”: to listen to the address to the community given by the Apostle, head of a Muslim State or State authority on important matters to be decided, is an obligation on the part of Believers in order to fulfil their obligations to the State/community and hence a duty to Almighty- Zikrillah- . This consciousness of Al mighty is termed as his remembrance. It is not running rosary or worry beads/Tasbih, through the fingers chanting God is great etc.

62-10  But when the duty is done spread in the land and seek Almighty’s blessings and remember Him often that you may prosper.

“When the duty is done”: The duty of attending the meeting. Then go back to your work as normal.

“That you may prosper”: Prosperity comes from endeavour, labour and hard work and not going to bed and for holiday!

62-11-And when they see bargains or sport, they rush to it and leave you (Apostle) standing. Say what is with Almighty, is better than these goods and sport, and Almighty is the best of provider.

“He is the best of provider”: The provision is assured from honest work.

It stands to reason that if the day and time is pre-fixed as it is today in religion, then Believers do not have to be “summoned “or called on the day, for they should be conscious of their duty to Almighty and be present there at the appointed time, as it is obligatory for them to do so.

It may be logically argued therefore that Juma’ being holy the other unholy days are left free to indulge in unholy or illegal activities as one pleases!

Most ridiculous and preposterous argument.

The verses above do not suggest any such hindrance in the path of acquiring normal lively hood and sustenance all through the week.

Consider 53-39: That human being can have nothing except what it strives for.

And 53-40: that the reward of striving will soon be obvious.

Iqbal the poet as usual is very conscious of what the religious brigade does to mankind: Quran Ko Bandhe Chaye Taweez Banaakar—Chahey to Khud Ik Taazah Shariet Kare Ijaad.--

By making Quran a sport for reinterpretation-They invent a new code as they please.

The capitalist world of the old for its industrial and agricultural production purposes considered Labour of the poor which was taken as of no-worth as their fiefdom to be exploited at will. Labour was supposed to work for them like a mule or worse, day in and day out till it dropped dead.

The Labour movement of the world fought long and hard and won the right for a “rest day” once a week and that became their right.

Saturday and Sunday though do have close relation with the Sabbath, however these days have acquired worldwide secular holiday importance and nobody thinks twice of them in terms them having religious connections.

The Muslim church played its negative part here too and established a perfectly normal working day of Friday for its own purpose as a holy day, separate and in excess of the secular holidays of the world. Thus putting Muslims out of steps with the other trading partners of the world and for the worse.

The Muslim nation has fallen in the trap of this holiness and believes that there is salvation in hereafter in observing the worshiping rituals of Juma’, even to the expense of inconveniencing members of the public of this world, and breaking a few safety laws in the process, as these pictures taken in an airplane and street of New York show: 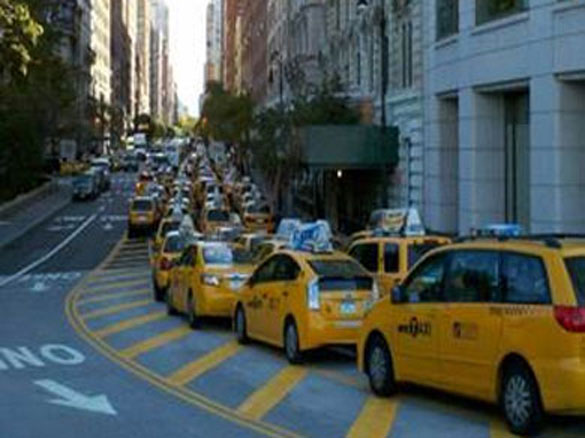 (“If you get stuck, you have to wait 20 to 30 minutes until they finish praying,” said De Robertis, a New York delivery driver!). Denying him the reward for his labour for the time!

The mindset that the religious industry has installed in its followers is best illustrated also by the common experience of many unfortunate Juma’ goer drivers face:- 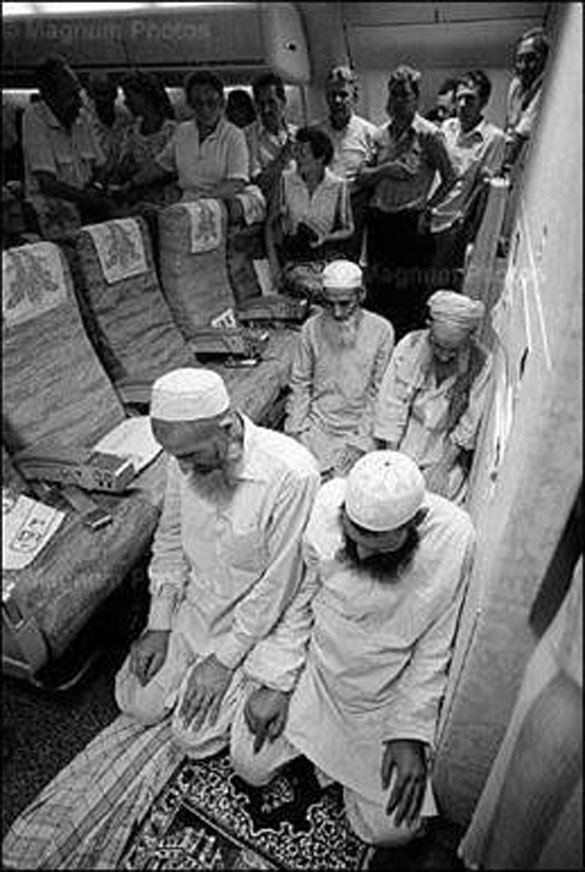 A late comer with a huge car had illegally parked his vehicle behind the legally and correctly parked vehicles in parallel parking bays, thus blocking at least three cars from moving out.

The owners of the blocked cars, waiting for this inconsiderate owner of parked car got very upset at him when the driver at last ambled in the car park from the mosque, with smug expression on his bearded face for having attended the Juma’.

Obviously Heated argument ensued. The arrogance of the driver was a shock to all—“don’t you see I am coming from Juma’?”

The taunt of Quran is obviously meant for the likes of such people:

107-6: Those who want to seen by others. To be seen as pious at the expense and detriment of the others?

Need one comment on the character of the man in the light of what he thought was him doing favour to the world at large for having come to “pray Juma”, albeit coming very late for it (62-9?). And then the total disregard to the inconvenience caused to the waiting drivers and ingratitude and arrogance shown to them, generated by his false-hood of piety, not to mention the harm to public and breaking the law of the land.

Would the waiting drivers who were obviously late to go to their work/offices (62-10) be held responsible if they had taken the law in their own hands and had pushed the offending vehicle in the ditch?

Should they have collectively done so as a religious edict and/or as citizen action?

Thank goodness that the majority acted as good citizens and did not act religiously.

Such fake religiosity of the offending driver negates all goodness that a human being is endowed with.

To do good for goodness sake, which is a universal endowment of all civilised people, is so arrogantly thrown out of religion window as to leave no trace of any decency left in men.

When no trace of decency is left, the void created gets filled by arrogance and there are many forms of that.  Thanks to religious obligations man is brain washed to observe and neglect what is the essence of Juma’ for the community as a whole.

Quran asks: Hal Jazaa ul Ehsaan Illal Ehsaan 55-60—is the reward for gratitude other than gratitude? Has the arrogant man ever heard of this? If he has, does he thinks that the world owes him gratitude instead for offering Juma’ as a reward and should therefore be allowed to park where ever suits him?

Who knows? Perhaps he does! Religious codes are “invented” to break all other codes!