Have a Happy Eid All: Thank You for Destroying Our Lives

“Narrated Abu Huraira (Father of cats) reported: The Apostle said: In the month of Ramadhan the gates of Paradise are opened and the gates of hell are closed and the Devils are chained.

According to this report then, the month of Ramadhan every year should be the most peaceful month in the whole world.

As God Almighty is the universal creator of the whole world and not just the Muslim world, this month should be a blessing and the most peaceful for all humanity.

However it is so obvious from our daily experiences and the news from all over the world that the Devil- Iblees the head of Satans- his associates, even in the Muslim world are totally free this month to ply with impunity their God-allocated duty of misleading humanity.

Then again it is confusing. The report refers to hell and paradise. As they are believed to be allocated on death only, it suggests that the devils after death have to wait outside the gates of hell till the end of the month.

So it must be that they break the chains and somehow return to this world and carry on with their evil deeds as usual.

The good people however have a free passage to paradise and do not have to wait till the day of judgement in this month.

Searching for an explanation of this aberration in God’s security scheme as given in the above reported saying of Apostle; the following Hadith of Tirmidhi # 618 on Ramadhan comes in handy.

Quoting only the relevant part of it, it says: “…And a caller calls, ‘Oh the seeker of goodness, come forward and oh the seeker of evil, desist’. And Allah has many who will be freed from Hell.’ This announcement is made every night”.

Are they then returned to earth?

It is common knowledge that when a country’s corrective services system makes a wrong judgement and frees a criminal, believing that the criminal is reformed, but the freed person again commits crime, and not only similar crime to the previous but more heinous ones. Such is the case with Iblees and his associates freed from hell.

God Almighty is Omniscient- all knowing, has many other Godly attributes. His judgement cannot ever be faulted. Therefore the above reports as propagated by the Muslim churches are not of any help to solve the mystery of the given reports.

They only give false hope to humanity at large.

Let alone petty crimes, the present day crimes against humanity perpetrated on large scales for political doctrines, under the umbrella of Islam in many parts of the world where Ramadhan is observed as Quran-ordained obligations, must be then taken with a fistful of salt to believe that all is forgiven in this month.

Recently, in the Muslim world, killings and traumatising millions of innocent people has been a daily occurrence in this month too.

When Muslims are asked as to what is learnt from fasting, the reply is that it teaches us sympathy, empathy and compassion towards fellow human beings and to refrain from committing any evil deeds (at least for this month).

Why then does such a noble teaching evaporate during this month too when, we witness murders in mosques, destructions and millions of refugees tracking across the borders to other countries for safety and security?

Tragically young children and old frail men and women lugging their meagre belongings over hills and valleys to seek shelter in tents; largely donated by “compassionate unbelievers” called Kaffirs by Muslims who perpetuate these situations!

Are these not the acts of criminals? The chief Devil and his associates who are supposed to be locked up for this month are free. Why are they free if the reports are to be believed?

Taliban (thirsty for what?), Boko Haram (appropriately named), al-Shabab (of the pirate nation), the Islamic State (a misnomer) and myriad others are the true manifestations of the Satan who are let out every night to perpetuate these crimes.

Travel west today through the Islamic Republic of Pakistan, and all the Muslim and Islamic countries on the way to Europe, and you are taking your life in your own hands even in Ramadhan.

Ironically it is safe only when one crosses into the unbeliever’s land of where the Iblees and his associates are not locked up for the month!

The non-Muslim world has no restrictions and carries on with business as usual, all the year round! Confusion reigns.

It is also propagated that all sins are forgiven in this month for the believers who fast during Ramadhan. One of the many such ploys by “good” Muslims- Devils and his associates-- to commit evil deeds till next yearend then be forgiven again.

The slate of sins is thus wiped clean; so they can start afresh for the remaining of the year, with crimes against human community—believers and non-believers alike. This Islam is the “confessional religion”, just like others!

Is this the purpose of Ramadhan given in Quran—the Book of Islam, that of Muhammad-ur-Rasullulah, that the devils flags are emblazoned with as their emblem, or is there another Islam and another Apostle Muhammad of other books?

If these acts of wanton destruction are carried out for political strategies then a Believer of Quran understands fully that any action of a Muslim must not be external to the ambit of the teaching of the one and only Book Quran.

If so, then according to the Book the believer is not a believer but a devil - a Rejecter –a Kaffir.

Let alone in the month of Ramadhan, for the rest of one’s life, the Book calls for compassion, sympathy, empathy and justice (Adal) with kindness to fellow human being.

Politics and concocted religions from other books mainly from Central Asia may well never be allowed to mix, but any form of activities, including politics cannot be separated from Islam of Quran the Ad-Deen-ul Islam, which is not a religion but a permanent highway code of life.

There cannot be any other interpretation of it other than “do good”; A’millus-Saalihat, as the welfare of humanity is the primary goal. In totality that is what the Book teaches.

The political chiefs and their associates, all of fancy but false Islamic organisations should read the Book by themselves with that message in mind as it is its primary teachings.

Fighting, war and armed conflict is only to be engaged with armed enemies.  Or else taking one innocent unarmed life is like committing genocide of a nation, says the Book. And that is what is happening today in the Muslim world.

The Eid is only a few days away. Will Iblees and his associates; all perhaps have been fasting for the month; have the heart to say “Blessing of Eid to you”, in Arabic, the holy language of theirs- تمنی لکم عيد سعيد; or words to that effect, to those they have committed crimes against and displaced them from homes and into refugee tents?

A major crime in anybody’s book.

And will the innocent displaced ones like this one then respond by saying: 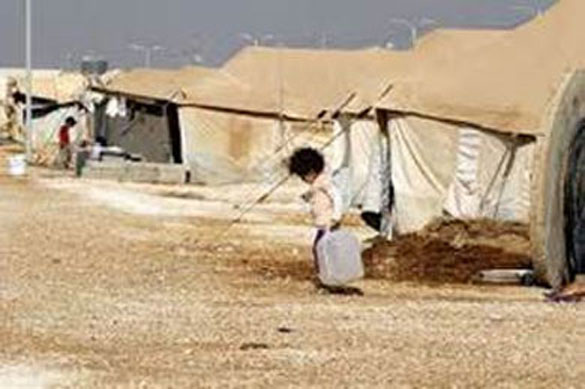 شکرٌ“thank you for destroying our lives”!And say “Have a Happy Eid”!