“Saudi Arabian billionaire Prince Alwaleed bin Talal has said he will donate his entire $32bn fortune to charity”. He said it is an “intrinsic part of my faith”.

The media is ablaze with the above heading as a major news item of recent days. 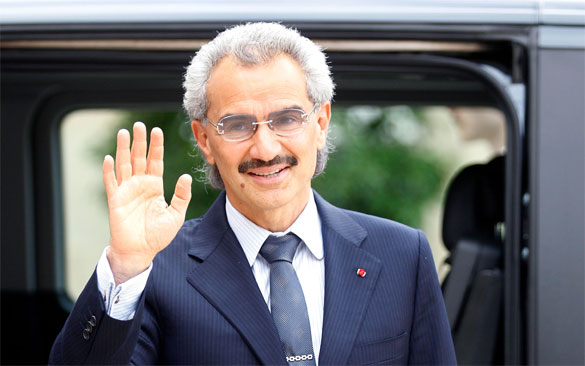 It is commendable that a Muslim prince as per his own statements; should attempt to emulate the world famous ‘Gates philanthropic’ institutions. It may turn out to be a catalyst for hundreds of princes from that region to express their love of humanity on large scale. That is assuming that such generosity; even on smaller scale is not being practiced already.

However it is clear from the news that this controversial prince is intending to operate philanthropy and charity at higher level and on global scale.

However last year he was upset by Forbes list of top billionaires which placed him lower than he was worth, he said. Publicity it seems is an essential part of being super rich.

The announcement is coloured with reference to Ramadhan and “Islam”, his Faith.

On That Basis Alone Some Pertinent Questions Arise:

1.       Is it that the prince became a Muslim this year: follower of ad-Deen ul Islam and therefore is fasting now for the first time in his life? He is said to be sixty years of age now.

3.       What has he put in place to ensure that he as an individual does not get that rich again?

5.       Why is he seeking so much “publicity” in the media with this announcement?

The fact that he is a Saudi prince and only sixty years of age, leaves no doubt that he must be a Muslim from birth. As his mother tongue is Arabic, it is also assumed that he is well versed in the Quranic commands in the original language.

Also that he is not fasting for the first time this year to be aware of the purpose of fasting in the month of Ramadhan.

In Islam, being a prince or a member of the royal family does not entitle a person to utilise and acquire from State treasury finances for business ventures to accumulate personal wealth. Although it is said that he borrowed finances from his family for these ventures; it must be remembered that the family is after all of royal clan.

It is assumed that being a prince, the financial assistance he received was not legally constituted “loan” that a common citizen of the kingdom would get.So the wealth that was generated and accumulated on the basis of the start given to him by his family is rightfully that of the Saudi nation and not their private property.

The sources of income established on thatbasis, that made him so rich in the first place, if are still in his possession they should rightfully belong to the State to ensure that he does not accumulate again the kind of riches that he now has to give away as his personal property.

As a person well versed in Quran in the original language, he would be aware of the fact that seeking such publicity and fame “to be seen by mankind” is against the tenets of Islam, the very Faith that he is propagating as being the reason that prompted him to take this noble action.

Charity as is commonly understood: that of a rich person giving something to a needy person, who then is “obliged” to the rich, has no place in the Book of the prince’s faith. It emphasis maintenance of “human dignity”.

Being a recipient of charity/handout is undignified and therefore an obligation is imposed on the State in Islam to ensure dignity of its citizens is maintained.

In this case, as the prince is a member of the ruling monarchy he is obliged to ensure that basic needs of its citizens are provided for and the recipient is not burdened by any sense of shame or guilt.

Therefore the fact that the prince is setting up a philanthropic organisation to address some of the needs of society in general, is perhaps a credit to the State which in today’s political climate needs some positive publicity to correct its sagging reputation; but does not in any way entitle the prince to the glory he is seeking as an individual.

The inherent status accorder to him on the basis of his personal wealth and his stated potential philanthropy; is based on the assumption that the wealth is accumulated by him by applying his own talents, hard work and honest means; a bundle of requirements termed as “Taiyib” in the Book.

The comparison by the prince with Gates philanthropic foundation would appear to be inappropriate. It is not known that Bill Gates ever acquired from US treasury any favourable financial assistance, or that the Income tax department treated him any differently to ordinary US citizen.

The Western capitalist “system” allows acquisition of limitless wealth as long as it is acquired within its legal framework. But this is not the place to question the system vis a vis Islam.

But in the context of Quran from where Islam originates, it is a matter of argument whether a system of government in which an individual can amass such wealth can be compared or not to the Fironic Qaroon of the past.

Unlike in the case of Qaroon-Korah, it is accepted here as praise worthy that this prince, after accumulating the fortune, has taken steps to divest some of it for general good. It is commendable and better late than never!

The tenets of Islam are clear: “no individual can accumulate wealth in excess of his or her legitimate needs, the source is kept free flowing for the benefit of the others and that the means of acquisition of wealth are Taiyib”.

In such a system therefore it would be impossible for anybody to get obscenely rich like Korah.

It therefore is an irony that the Saudi prince is one of the richest persons, having accumulated the riches merely because he was born in the royal family and got rich on the back of the State which is considered as the “custodian” of the faith.

It is in all religions that “charity” is considered as meritorious. However, in Islam the system of distribution of wealth to establish equitable society is an obligation and a primary duty, both on individual, State and is not termed as charity.

God’s gifts area trust to be shared for the benefit of humanity and on real-time basis. The State is to ensure that individuals do not accumulate personal wealth depriving the needy of the benefits for the time taken to accumulate it.

And not to divide humanity into ‘haves and have-nots’ while so doing.

Hence a person in the prince’s shoes must be asked if in their elevated position and professed faith, they are allowed to withhold the flow of the benefits of God’s gifts for any length of time. And then to open the flood gates so to speak in the guise of “charity”, to claim meritorious status or even to seek any kind of publicity from it as a reward?

“Is the reward for good other than good?” asks Quran.