Recently, my father’s close friend passed away. Baba was extremely sad and didn’t have the strength to visit the family all by himself so I decided to accompany him. I reassured him by telling him that I would recite the Holy Quran while he condoled with the family.

As I entered the apartment, I took off my Chappals in a corner of the room where there was already a mound of different shapes and sizes of diamanté laden shoes. As promised, I took the Holy Quran and sat down next to a group of middle-aged, anorexic ladies who were dressed in expensive white loose shirts and coloured palazzo trousers – very trendy for Afsoos, I thought to myself as I looked down at my plain attire. 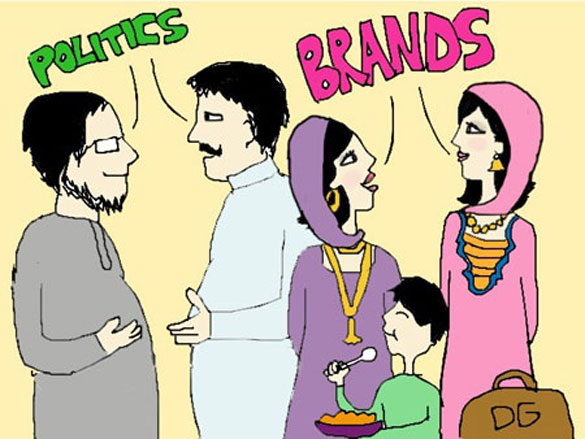 I tried to block out their incessant banter and concentrate on reciting the Holy Quran, but they were so loud that I could hear their shallow dialogue in the other corner of the room. Their conversation revolved around trendy brands and the season’s fashion updates. They went on about how hard it was for them to squeeze in time out of their oh-so-busy schedules to drop in at the Portia sale and how frozen yoghurt was only about 99% fat free and not a 100% fat free.

What great conversation topics to take on at a funeral, right?

Well, at least they respected the occasion enough to wear subtle and mellow shades of pink and beige lipstick, let’s give them that much.

Eventually, their loud chatter got the better of me. It was so annoying that I had to find a new place to sit, but that wasn’t very helpful either. I was sitting next to a group of men in their fifties who were busy discussing Pakistani politics. The increase in petrol and CNG prices, the terribly expensive eggs and the never ending debate on the Election Day were a few highlights from their intellectual conversation.

They could’ve easily beaten Hamid Mir and Kamran Khan if they were to be invited on a political talk show!

Oh dear! How did they expect the lifeless human being to find peace when their concerns were so much more important than his tranquillity? I was appalled at their utter disrespect towards the deceased as they didn’t refrain from swearing and cursing even when they came to condole with the family. However, this was not the end of my disgust.

Women were accompanied by their children who just made the situation worse. They threw tantrums, tugged at their mothers’ chiffon Dupattas and sulked about how they’d much rather be at home than at the sombre house. The teenagers there…well, what can you expect? They were glued on to their smartphones, perhaps updating their Facebook status to

Some of them even had the nerve to ask for the Wi-Fi password! I am not joking – this actually happened.

Soon after, the food was served. The aroma of the Biryani was enough to start a marathon. Aunties forgot their detailed diet plans and uncles forgot their cholesterol levels as they pounced to fill up their plates. Kids let lose and started fighting over potatoes – which are hard to find in a dish of Biryani. I witnessed people gobbling their food whilst putting both hands to use – one hand to cover the Biryani rice and the other to wipe their dripping nose, obviously!

In that moment, my appetite died.

It is sad that funerals have become a hangout opportunity for many. Isn’t it tragic to know that the day you leave this world, your friends and relatives will be discussing the budget or the latest lawn prints at your funeral? The room will be full of non-sombre glances, children with unattended tantrums, technology addicts and pseudo political uncles.

Tears, heartbreaks and prayers are rare to expect on your last day in this world. Showing off your elaborate chicken kari Kurta, exchanging gossip and discussing the latest politicians and brands are what funerals are all about now.

What happened to the times when people actually showed empathy towards a family that is grieving? Have we become so shallow now?