The powerful loudspeakers of my neighbourhood mosque have just announced a death. The introductory words never change: “Hazraat, Aik Zaroori Ailaan Sunyeh.” Respectable sirs, hear now an important announcement. The “sirs” doesn’t surprise because I have heard such announcements all my life. It’s always men and only men who need to be informed of any significant happening. Lest “Haya”, modesty or propriety? be violated, women cannot be addressed directly. 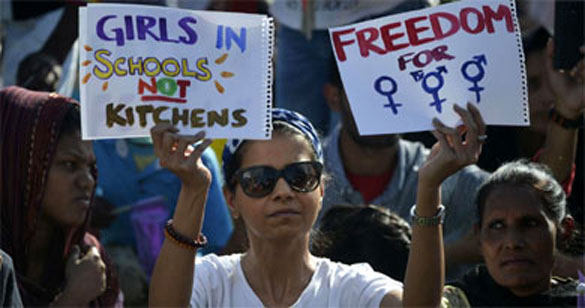 The rest follows a well-established pattern. Had the deceased been a man, I certainly would have learned his name. But this time it was a woman and haya required she remain unnamed. Indeed, the later part of the announcement identified her as somebody’s wife. If unmarried, it wouldn’t be different except that she would be joined to either her father or a brother. Mothers and sisters don’t count.

To see where women stand in the pecking order, I suggest the reader tour any graveyard. You will walk past hundreds, perhaps thousands, of stories now silenced. In these sombre environs, every tombstone marks the final resting place of some individual. Their inscriptions record the passage of someone who shall never stir again.

Though six feet under, all males hold on to the name they used along their life’s journey. The male’s identity has been literally etched into stone? a stone that’s expected to stay. Sometimes, the father’s name appears as well but, of course, never the mothers.

And the female? Some tombstones do carry her name but many do not. Whether the end of the woman’s journey shall be marked or remain unmarked is not for her to decide. That too is up to some man, or possibly men. Even if named, she is invariably identified as somebody’s wife or as her father’s daughter.

Not all women lament their marginalisation or resent loss of control over their bodies. On the contrary, many accept it either stoically or gladly. But some, such as the female militants of Lal Masjid’s Haya brigade, actually celebrate their inferior status in the society.

During the Aurat March, held earlier this month, as we stood on opposite sides of the Islamabad Press Club, I listened closely to their speeches. For them men and women have separate, non-overlapping roles. They have willingly accepted a status lower than men’s in all crucial aspects of life, freedom of movement, freedom of dress, freedom of association, and freedom to seek employment.

This lack of freedom stares you in the face all across our society but even more in poorer sections. The majority of Pakistan’s young women cannot choose their life partners and, instead, are “given away” by their parents. Divorce and child custody overwhelmingly favour the man over the woman. Nor is marital rape recognised as an offence. Inheritance laws are sharply skewed against women, as are employment opportunities. Nevertheless, for the haya brigade and supporters, restricting a woman’s freedom is both natural and divinely ordained? and hence, to be welcomed.

People who value freedom find the haya brigade’s position unacceptable but actually it is quite logical. Countless examples exist where individuals have voluntarily traded their freedom for security. Notably, prisoners released from jails have sometimes pleaded to be taken back. Or, as another example, after slavery was declared illegal in America, many black slaves petitioned their white owners to keep them on the plantations. So if jailors and slave owners can provide more security than the wilderness, then why not? More to the point: whenever a woman accepts patriarchy in exchange for lessened, freedoms she buys security for herself and her children.

The erudite Yuval Noah Harari asks in Sapiens why patriarchy has tenaciously weathered political upheavals, social revolutions and economic transformations. Over thousands of years why have there been so few alpha-women like Cleopatra, Indira Gandhi, or Golda Meir? Is the reason lesser muscle power, lack of male aggressive genes, lesser social networking skills? After much discussion Harari concludes: we don’t really know.

But, wait! We do know something very important? modernity is corroding patriarchy. Laws of the old world are sliding into irrelevancy. For example, the Book of Deuteronomy instructs Christian soldiers that if they “find a beautiful woman” among captives taken in battle then if “you desire to take her, you may”. Notwithstanding this sanction, even staunch Jews and Christians today recoil in horror at the idea of sexual slavery. Instead, gender equality is now the West’s new mantra. Even CEOs and presidents dread accusations of gender discrimination.

Muslim countries are also rushing to catch up. Even if some decry gender equality as a Western imposition, nevertheless fewer and fewer women remain shuttered in their homes. In spite of deadly opposition from Taliban-like forces, education for girls is expanding in Afghanistan and Pakistan. Although the Pakistan government has pledged to uphold religious values, it refuses passports unless a burqa-clad woman agrees to a mugshot. Just as significantly, though generally banned from visiting cemeteries, you can see more and more women grieving over their loved ones.

The stalwarts of patriarchy are trying to stop a battle tank with a musket. It’s not working and so they froth and fume. But technology’s relentless push is also willy-nilly changing them. Remember those weighty scholars who 20 years ago gave fatwas against photographing human faces or depicting humans pictorially? Today they scramble for TV time and gleefully pose for selfies taken with their smartphones!

Whether in the graveyard or out in the living world, Pakistan’s women are denied dignity and equality by those who claim to know God’s will. In the struggle for justice they have a long road ahead? longer than in most countries. But time is on the woman’s side. It is for us men to march alongside them.

Original Headline: In Pakistan, women are upending centuries of patriarchy – and men must catch up