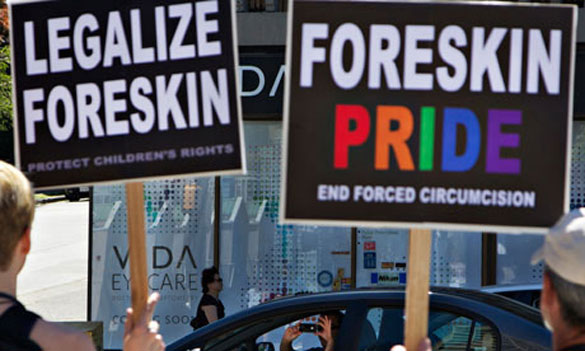 Evidence suggests, American doctors have concluded, it is the kindest cut. Circumcision can reduce the risk of urinary tract infections in infants, cut the risk of penile cancer and lower the risk of HIV and the human papillomavirus, which causes cervical and other cancers. So why is the removal of a tiny flap of skin at birth, both an ancient religious ritual and an apparently pragmatic hygienic practice, causing controversy around the world?

While the American Academy of Paediatrics (APP) has concluded that the health benefits of circumcision outweigh the risks and the procedure is a matter of parental choice, outraged opponents call it male genital mutilation, or child abuse. Many parts of Europe concur. A court in Cologne this summer ruled that circumcision contravened the rights of a child to decide later in life on his religious beliefs. A German doctor has now filed charges against a rabbi for performing circumcisions on two infant boys, causing outrage in Jewish and Muslim communities and a delicate debate about intolerance, religious freedom and children's rights in Germany.

Circumcision is an ancient ritual in Judaism and Islam but there is no ritual circumcision in Hinduism and other religions that arose outside the Middle East. Aboriginal societies in desert areas of Australia also traditionally practised circumcision and historians believe the procedure was originally an early public health measure to prevent balanitis, a swelling of the penis that can be caused by the accumulation of sand under the foreskin.

Until the 1950s, British men were routinely circumcised for health and hygiene (balanitis, easily cured and prevented with basic hygiene, occurs in around one in 20 infants, and is more common in uncircumcised boys). Circumcision is still legal with parental consent in the UK but barely 5% are circumcised now for medical reasons, although some religious circumcisions may be unrecorded if undertaken outside mainstream medicine.

The difference in statistics between Europe – in Scandinavia rates are as low as 1% – and America, where most men are circumcised, is striking, and the attitudes of medical opinion in Europe and the US seem poles apart. Recent US research has added weight to the pro-circumcision case but the number of newborn circumcisions is falling, largely on cost grounds – the public Medicaid programme no longer pays for the procedure in more than a dozen states.

In Europe, there is far less consensus on the medical benefits of the removal of a piece of skin filled with nerve endings. "The medical harms or benefits have not been unequivocally proven," says the British Medical Association in its guidance for doctors. "It is essential that doctors perform male circumcision only where this is demonstrably in the best interests of the child."

The main principle of surgery, as Professor John Hutson, an Australian general surgeon, explained in a symposium on circumcision in the Journal of Medical Ethics, is that no operation should be undertaken if there is no disease, and the risk of the procedure cannot be justified without the risk of a disease. "The surgical argument for circumcision of all neonatal males at present is very weak," he argued, "and with rising public health standards in the developed world, is likely to remain weak."

Perhaps the most compelling evidence for the medical benefits for circumcision comes from meta-analysis of studies that find male circumcision at least halves the relative risk of HIV infection throughout sub-Saharan Africa. "Is it ethical to dismiss a simple prophylactic surgical procedure that can halve male rates of infection?" argued Professor Roger Short, a distinguished Australian biologist, in the Journal of Medical Ethics. These findings are not replicated in the west, where the reduction in risk of STIs is generally found to be 10%.

John Dalton, a researcher for Norm-UK, a charitable support group for circumcised men, argues that the studies showing that circumcision halves HIV infection have "no external validity" – they do not reflect what happens in the real world. These studies have tended to recruit volunteers who want to be circumcised, performed the operation on half and then studied both cohorts to see how each fares. Dalton questions a number of potential biases in such studies: recruiting people who already believe circumcision will help stop HIV; terminating studies prematurely, which tends to overestimate benefits of a treatment; and losing significant numbers of participants to follow-up studies.

Dalton argues that the AAP have "made a fool of themselves" with their selective review of evidence neglecting some evidence contradicting the health benefits, and overstates the risks of, for instance, penile cancer, which is extremely rare. It has been estimated that 300,000 circumcisions may be required to prevent one penile cancer a year. "They are saying that the benefits exceed the risks but they haven't quantified the benefits and they haven't quantified the risks," says Dalton.

If the medical evidence is disputed, why is circumcision so widely accepted in the US? "I find it amazing," says Tally, a pseudonym for a 56-year-old American blogger who was circumcised at birth and is restoring his foreskin through non-surgical methods. He argues that "pecuniary gain" is one factor in its popularity in the US: circumcision typically costs $400 to $800. "I don't see the social conscience that you have in the UK or the Canadians have," says Tally. "We're driven very much by a sense of independence and profit."

It may be unfair to impugn the professionalism of American surgeons and broader factors clearly influence its popularity, including serious medical research, strong religious traditions and different conceptions of children's rights. Dalton argues it is telling that the US is one of three UN member states, alongside Somalia and South Sudan, that has not ratified the UN declaration of the rights of the child.

While participants in the AAP review say they considered ethical issues, including whether parents have the right to make the decision without the child's consent, Dalton argues its findings don't "consider that children that children are human beings with rights and the right to decide whether they have part of their penis cut off. My personal view is there might be some partial protection against diseases that is conferred by circumcision but you don't cut off part of a child's body to prevent disease."

If circumcision has potential health benefits but ethically requires consent, why not carry it out later in life? According to the AAP, medical evidence suggests the procedure is riskier later on when the foreskin is thicker. This finding, too, is disputed. "To be brutally frank, infant circumcision is 'safer' because infants don't report complications," argues Dalton.

There will always be more questions than answers when modern medicine and conceptions of human rights collide with ancient religious practices. A final question: how does Tally restore his foreskin without surgery? Circumcised men are sharing tips increasingly online about manual stretches and devices that apply tension with a brace to recreate their foreskin, a process that takes one to five years. "If you stretch skin, the skin responds by getting longer," he says. "I'm at the tail-end of the process. I don't tug as often as I used to."