Unruly Behaviour, Slogan Shouting And Abusive Language By Pakistanis Inside The Prophet's Mosque In Madina During Ramazan

1.    On 28 April, Pakistan's two ministers were heckled by Pakistani protesters inside the Masjid-e-Nabwi

1.    2.Information and Broadcasting Minister Maryam Aurangzeb and Minister for Prevention of Narcotics Shah Zain Bugti had visited the mosque.

3.    One protester pulled the hair of Mr Bugti. 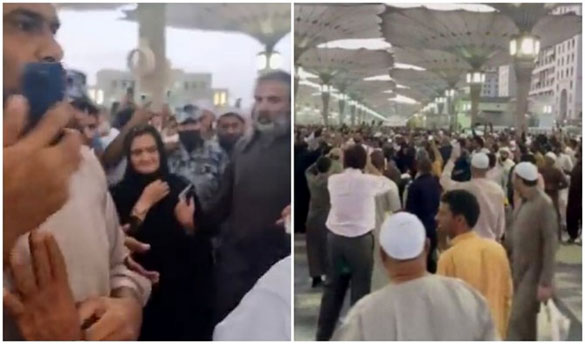 The spokesperson for the Madinah Police said the suspects were “referred to the competent authorities after legal procedures were completed against them.” (Screenshots)

Political rivalry and mudslinging has reached a new low in Pakistan. Since Imran Khan was removed from power he has been running a campaign against the Shahbaz Sharif government. He has held rallies in several towns of Pakistan and the war of words is also in its peak between the two parties. Often this war of words culminates into personal attacks.

But on Thursday, this political rivalry reached such a low that even Pakistanis could not expect and defend.

The new prime minister of Pakistan Shahbaz Sharif and two ministers of his cabinet Maryam Aurangzeb and Shah Zain Bugti are on 3-day official visit to Saudi Arabia. Maryam Aurangzeb and Shah Zain Bugti took time off to visit the prophet's mosque in the evening. On their visit, Pakistanis, who were apparently the supporters of Imran Khan and his party, PTI started shouting slogans against them. They shouted 'shame, shame, thief thief, traitors' and used abusive language against the two ministers. One protester even pulled Mr Bugti's hair and fled.

This all happened inside the prophet's mosque which is one of the three most sacred mosques in Islam together with Kaba in Makkah and Aqsa mosque in Jerusalem. The unruly behaviour by the Pakistani Muslims is a sacrilege against the holy Prophet pbuh and the Muslims of the world have expressed anger and grief over the incident. In Pakistan, Imran Khan and his party leaders are being criticised for provoking his supporters to go this extent.

Religious scholars including Maulana Tarique Jameel who is close to Imran Khan has condemned this act. But Imran Khan is yet to make a formal statement condemning the incident.

Maulana Tahir Ashrafi said that the prophet's mosque was dishonoured due to the political differences. This was not acceptable. Islamic scholar Mohammad Ali Mirza said that it was a grave sin and a sacrilege against the holy prophet pbuh and Imran Khan should make a public statement condemning the incident. On the contrary, some leaders of PTI, have defended the incident. A leader of PTI Iqbal Khan Afridi said that it was a spontaneous public reaction and that the incident took place outside the mosque. He said that a thief will only be called a thief even in a sacred place.But Engineer Ali Mirza said that it's only a lame excuse and that the entire area within the boundary of the mosque falls under the mosque.

According to media reports in Pakistan, Imran Khan and Shaikh Rasheed had been inciting their supporters in Madina to attack them. After the incident, Rashid Kashif, Shaikh Rashid's cousin and a central minister even expressed jubilation over the incident.

Meanwhile, the Saudi government has taken strict action against the mischief makers and arrested several persons involved in the incident. Each mischief maker has been fined 60, 000 Saudi Riyal and sentenced to five years imprisonment.

This incident shows that political intolerance has grown in Pakistan in recent years. As a backlash of the incident in prophet's mosque, the former deputy speaker and a PTI leader Qasim Khan Suri was assaulted in Islamabad on Friday night at the time of sehri by some miscreants when he was sitting in a hotel. Both the parties have not respected the month of Ramazan.

Reacting to the incident, Maryam Aurangzeb said that the PTI has disrespected the prophet's mosque for political gains.

Imran Khan had alleged that the conspiracy to topple his government was hatched in the US and Shahbaz Sharif has been painted by him as a puppet of the US. Shahbaz Sharif and his son Hamza are facing corruption chares involving illegal land allotment and money laundering in a federal court of Pakistan and they may be indicted on May 14.

However, this does not justify the heckling and misbehaving with the ministers of his cabinet in a holy place in a foreign country. This only shows that Imran Khan or for that matter the politicians of Pakistan can go to any extent to harm the opposition.

Imran Khan is also being criticised because he claims he wants to model Pakistan on the state of Madina of the prophet's time. Critics ask if this is the kind of a state he wants to build. They therefore, think that his claim is only a rhetoric to win public support.

Imran Khan has won the support of the religious circles and of common Pakistanis with his Islamisation of education and taking other steps that have presented him as the champion of Islam. He has successfully presented Shahbaz Sharif as an agent of the US. Corruption charges have further distorted his image. His partymen are seen by the majority of Pakistanis as a cohort of thieves who have captured power with the help of Pakistan's enemies.

All said and done, the incident of slogan shouting, abusing a lady minister and heckling another minister in the holy prophet's mosque is a condemnable act. The incident only shows how intolerant and violent the Pakistani society has become.