Geneva: A number of Muslim inventors from around the Muslim world turned up to showcase their creations in the International Exhibition of Inventions held at Geneva, Switzerland. This was one of the world's largest exhibitions devoted to innovation with some 60,000 visitors. It was gratifying to see so many Muslim countries including Saudi Arabia, UAE, Qatar, Oman, Iran, Indonesia and Malaysia participate and send their mostly young inventors, some of them women. 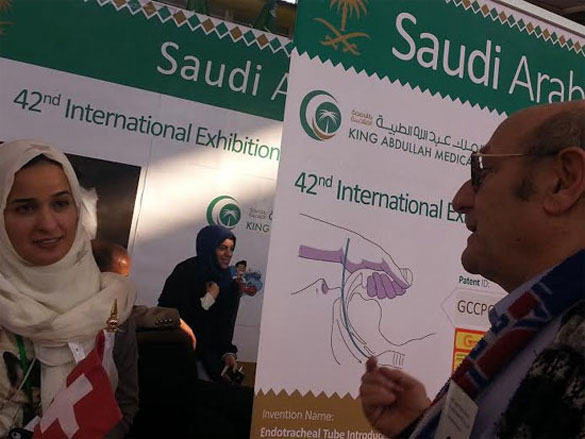 The most notable in this grand event of scientific inventions was that even Saudi women scientists showcased their creativity. It was very heartening to see a Saudi woman scientist win three gold medals at the Geneva International Exhibition for Inventors, which is a truly outstanding achievement and should be emulated by Muslim women in other Islamic countries. Ghaida Al-Sulami, a lecturer at the College of Nursing in Umm Al Qura University won the medals in a joint collaboration with a team from King Abdullah Medical City (KAMC). Her project was concerned with the invention of an electronic screen for communicating with patients in intensive care units (ICUs). Al-Sulami also won two gold medals from the Portuguese and Roman Wings. She was overwhelmed with joy and excitement at her unique achievement and cooperation with the KAMC. 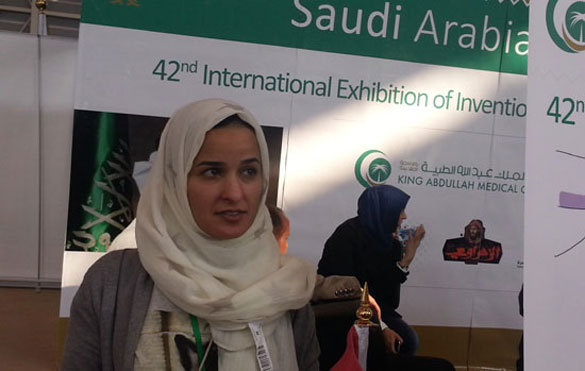 Talking to New Age Islam, Ghaida Al-Sulami explained she had no problems living and working as a woman in Saudi Arabia. Asked if she felt women in Saudi Arabia lived under constraints, as they could not even drive cars, she said she did not want to talk politics. However, when explained by this correspondent that she was only being asked to share her thoughts about the Saudi society and not politics, she opened up. Even when she was studying in one of the topmost universities in the United States, she lived her life in an Islamic way, donning hijab and having no boyfriend, etc. and she does the same in Saudi Arabia. So she has no reason to feel constrained. She had several offers to work in the US, she said, but her family wanted her to come back and so she chose to go back. She knew driving herself, which she learned as a student in the US and naturally misses not able to drive now but she said it did not matter. Small price to pay to live with her family. She said she would take her project to the forthcoming Paris International Conference for patient safety as well. She also expressed pride in conveying Saudi women’s message to international events like the one in Geneva and Paris.

It is noteworthy that King Abdullah Medical City (KAMC) achieved seven international medals along with two certificates of excellence in the International Exhibition of Inventions held at Geneva.

Similarly, young, dynamic and inspiring Muslim Students from Sultan Qaboos University (SQU) won the gold medal. The two SQU students Manea bin Said Al Kalbani and Salim bin Hamoud Al Zaidi of Department of Computer were extremely delighted when their invention was selected as the best application of the smart phone, in the category of computer science, software, electronics, electricity and telecommunications. Their invention was titled “Waiting List Service”, an application for smart phones with queue. The invention displays information about the queue system, such as the number of waiting people, time rate, waiting time and other features that can help customers get aware of their turn, thus providing them with time to do other work rather than waiting on premises of the service provider.

With innovation a weathervane of the shifting centre of the global economy, over half of Geneva’s exhibitors came from Asia and the Middle East. Most of the rest were from Europe, and a handful from Africa. During the opening day of the exhibition, an African Muslim inventor Umar Ayoumbaye presented his invention that bagged huge applause. He invented an extra flat air conditioning unit, independent in terms of energy, for nomads and tourists who travel on camels or elephants in warm areas and also for resorts without electricity. Umar’s inventions included a cracker for soapberry tree nuts — an ultra-hard source of cooking oil in northern Africa — as well as a simple mechanical hand for the disabled and a cooker with a safety locks.

Muslim scientists and inventors hailing from different Islamic countries particularly Saudi Arabia, Iran, Oman, Qatar, Bahrain, Egypt, Indonesia, Malaysia, Tunisia and Libya participated in this event and captured the visitors’ attention through their inventions. We are producing here some of them with their inventions in different fields of scientific development:

Indonesian school girls who won gold medals for their inventions 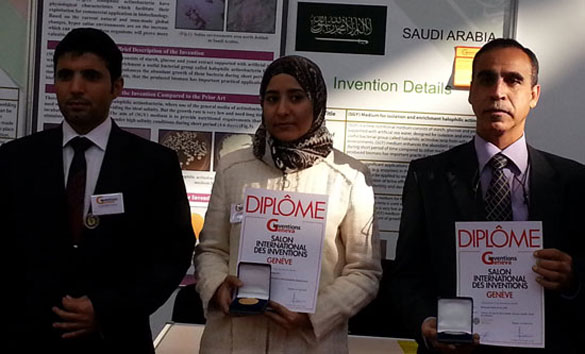 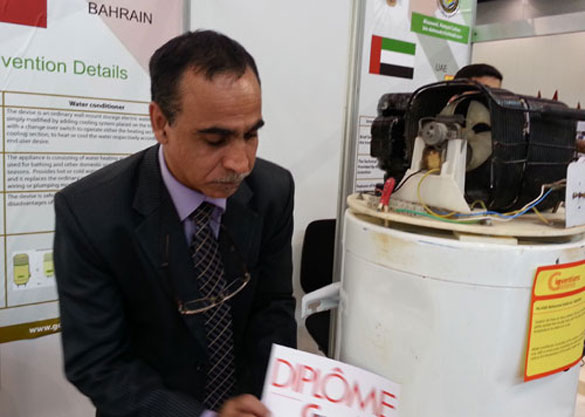 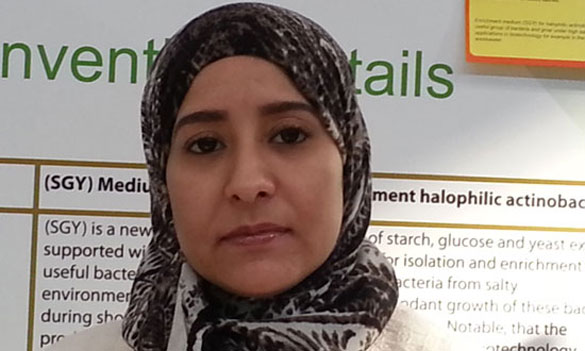 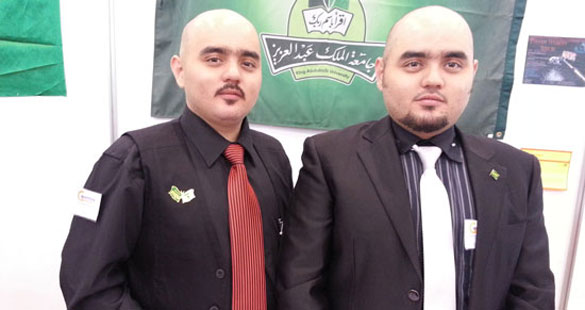 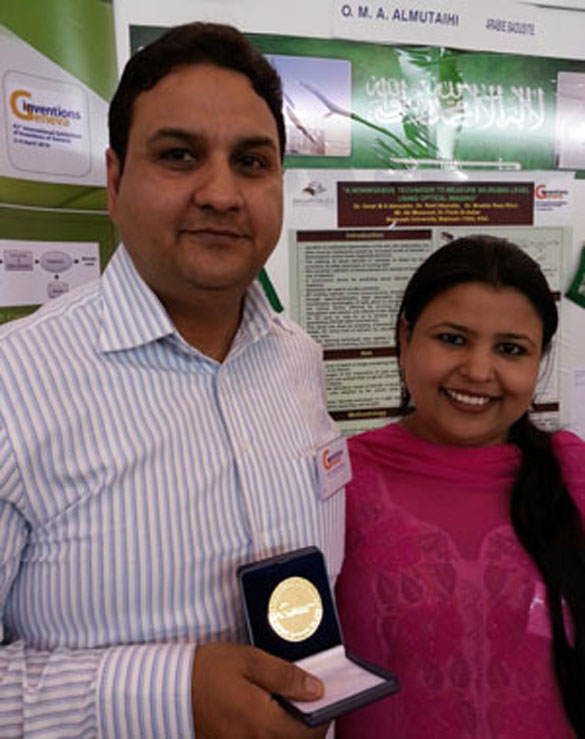 Indian Muslim couple of inventors from Faridabad, Haryana, now based in Jeddah. Delighted for the support they received in participating in Geneva Expo, they told New Age Islam that they are grateful for the support and facilities they have received in Saudi Arabia for their scientific work.

(2) Al Barwani Duhi Jamal Hilal (Oman) has invented a welding machine which operates by water as gas used for welding and cutting. It is a portable machine which also stores water and can a flame torch electronically in a precise way.

(3)  Allawi Mohammad Habib Ali (Bahrain) invented water conditioner consisting of two sections, a heating section and a cooling one, with a small pump circulating the water between the two sections to reduce the temperature of the water heater tank.

(7) Hebat al-Rahman Ahmed Hafiz (Egypt): Device and method for restoration of bodies by nano-powders and laser method and apparatus for repairing surface defects in different bodies.

(8) Hormozeh Hamid (Iran): Giant ship driving system which actually is substitute system for any engine in large ships such as aircraft carriers or oil tankers or liners that use lots of fuel.

(2)      Al-Khalaf Rakan Khalid (Saudi Arabia): EzSize, it gives the ability to measure the 3D surface and size of an object with accuracy and ease,

(5)      Attar Ammar & Khan Esam (Saudi Arabia): Flexible portable microphone that can help the speaker to use it in different positions giving him freedom of movement,

(9)      Rahim Normala Binti (Malaysia): Virtual Umrah (an interactive application that incorporates multimedia elements and virtual reality technology based on the user, centred design guidelines and theories, a new method for learning the rituals of Umrah).

(4)      Karimi Shabanzadah S. (Iran): Concrete Damping Traverses with 3 layers to absorb the shock of dynamic loads from rail to traverses,

(1)      Al-Naamani Ibrahim Khamis Sultan (Oman): A new and unique bicycle which is balanced and does not have gravitational torque acting on it because its chain system is centred and provides comfortable riding with equal forces from both left and right legs no to the pedal, (2) Al-Khenji Jassim Abdullah (Qatar): Emergency Runway, (3) Gueri Mohammad (Algeria): Circular wing for vertical flight for the air transport business, Fadaei Mohammad Abadi A. & Kordsalar Zehi (Iran): Intelligent steering wheel for cars, (4) Hashmi Syed Masoud (Iran): Automatic windshield wiper using nano technology.

Protection of the Environment and Energy

There were many more Muslim inventors in this grand-scale event who came up with such an astonishing array of discoveries and inventions that left the visitors spellbound. However, the following Muslim inventors won more applause:

The Geneva Exhibition of Inventions 2014 brought together scores of young and aspiring Muslim inventors, representing the Islamic countries. It was aimed at encouraging young inventors of all world nations to continue doing scientific and technical research. The event drew more than 3,000 visitors from 70 countries.