Abduction-Conversions of Young Girls and Legal Cover in Pakistan

Their names change, their dreadful stories remain the same. It can be Kavita, Maria, Simran or Huma, what bonds their doomed fates in Pakistan are their faiths. The forced conversion of minor girls from minority communities to Islam is a pandemic that won’t end on its own. 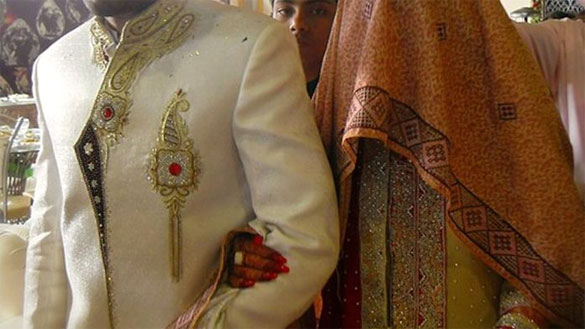 Prime Minister Imran Khan can say Pakistan will take strict against anyone targeting minorities, but this practice has continued for years with impunity.

Pakistani contractors preach the world on Islamophobia, while Pakistan persecutes its own Shias and Ahmadis. We are triggered over Muslim rights in Europe and India, while oppressing our own minorities with state patronage.

And now, there is another popular way to hide forced conversions to Islam — say the minor girl was 18 and show a fake certificate or say she has had her first period. She is an adult then, and no more questions are asked by the state.

Last month, a teenage Hindu girl, Simran Kumari from Ghotki in Sindh, was kidnapped and then miraculously resurfaced at the shrine of Bharchundi Sharif, infamous for converting thousands of Hindu girls to Islam. Kumari’s family members are now forbidden to see their daughter because they are ‘Kafirs’ and she has been married off to her Muslim kidnapper.

In another case earlier this month, 14-year-old Parsha Kumari from Khairpur was abducted, forced to convert and married to Abdul Saboor. Like in most conversions cases, the family produced a school certificate to verify age, but a ‘free-will affidavit’ from the kidnapper-husband set the minor’s age at 18. Thus, showing that the girl is an adult and can make her own decisions.

The dilemma of each forced conversion is that no medical examinations are done to determine the age of the minor independently by the authorities.

And automatically, the system, which has been rigged by the religious and social VIPs, sides with the captors and not the aggrieved families in most cases. Questions arise on why only minor Hindu and Christian girls ‘fall in love to get converted’ for men thrice their age? Why don’t Sindhi Hindu boys fall in such love?

How does the system help even if a girl escapes? There’s not even the pretence of carrying out justice then.

Maria Shahbaz, a 14-year-old Christian teenager who recently escaped her abductors, provided testimony on how she was raped, forced to convert and then married to her kidnapper. She was videotaped while being raped and was threatened with release of her video if she didn’t obey orders. Maria was then pushed into the prostitution ring — from where she escaped. Even after braving the ordeal of repeating what happened to her, Maria and her family are being threatened, and justice remains a far cry.

The Lahore High Court had earlier ordered her to go back to her kidnapper after her family protested. And when her family contested that she wasn’t 18 and was forced, the court said: “The statement of Maria Shahbaz as well as her general appearance unambiguously show that she is a grown-up young lady who seems to have attained the age of puberty.”

Huma Younas, another Christian girl who was abducted and converted at 14, is now pregnant from rape by Abdul Jabbar. In her case, the Sindh High Court ruled that a girl can get married after her first menstrual cycle under the Sharia law. It did not matter if Huma was non-Muslim, or that her school and baptism certificate showed she was born in 2005, or that she was kidnapped and forcefully converted and married. Her forced marriage was given a legal cover despite the fact that in Sindh, the Child Marriage Restraint Act 2013 prohibits marriage under the age of 18. The federal government of Pakistan Tehreek-e-Insaf (PTI) had vehemently opposed the bill to set the marriageable age of girls at 18 saying it was un-Islamic.

In the absence of any law against forced conversion in Pakistan, there is hardly any will from the provincial Pakistan Peoples Party (PPP) government or the federal Pakistan Tehreek-e-Insaf (PTI) government to effectively implement the child marriage laws in place. There is no dearth of cases but the seriousness of the government is visible because it is still deciding on the “definition of forced conversion” with the help of the clergy. Wonder how many more minors have to be kidnapped and converted for lawmakers to define what a forced conversion is, what is free will and what statutory rape is, how to independently verify age of minors, and how the law should see sexual relationships with anyone below 16.

The fear of kidnapping and conversion has had an impact even on affluent Sikh and Hindu families, who, over the years, have stopped their girls from getting an education after primary school. They say that it is the only way for them to protect vulnerable girls.

Conversions coupled with discriminatory laws and societal prejudices make life miserable for the non-Muslims who want to survive in the country. But when notorious men such as Mian Mithoo of Bharchundi Dargan hobnob with powerful men, it is a clear message for Hindu parents — your daughters are children of a lesser god.

Original Headline:   Is she 18? How Pakistan’s forced conversion of minors gets legal cover