Some Basic Astronomy and Mathematics Can Accurately Predict Moon's Emergence

On May 16 this year, the minister of science and technology, Fawad Chaudhry, declared that this year’s Eid-ul-Fitr would be celebrated on May 24. By doing this, he was signalling the futility of having a committee of clerics dedicated to the sighting of the Eid moon, when some basic astronomy and mathematics can accurately predict its emergence. 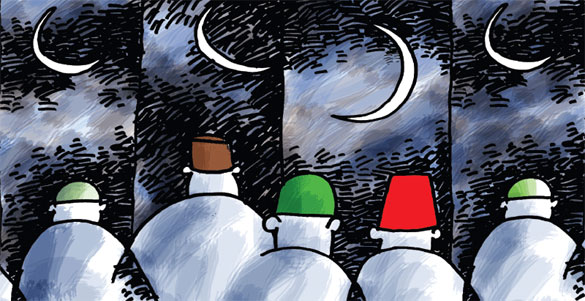 The move did not go down well with members of the committee, known as the Ruet-i-Hilal Committee. A heated debate ensued. Sightings of the Eid-ul-Fitr moon in Pakistan have had a jagged history. Before the creation of Pakistan in 1947, it was a tradition among the Muslims of South Asia to sight the moon with the naked eye and report the sightings to ulema or clerics. 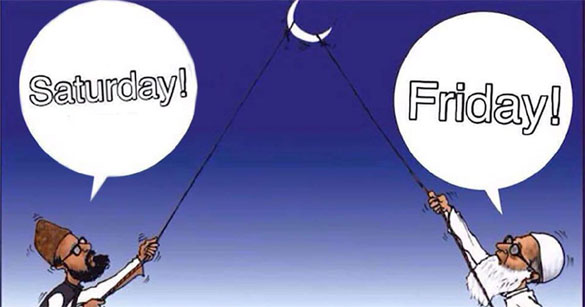 In fact, this ritual was quite common among most Muslims in other regions as well. The tradition was not interfered with by European colonialists who, between the 18th and mid-20th centuries, ruled over vast swathes of Muslims in the Middle East, Africa and South Asia and oversaw the introduction of modernity in these regions. Ironically, the need to utilise more ‘scientifically sound’ methods to sight the moon began to emerge during the decolonisation period. 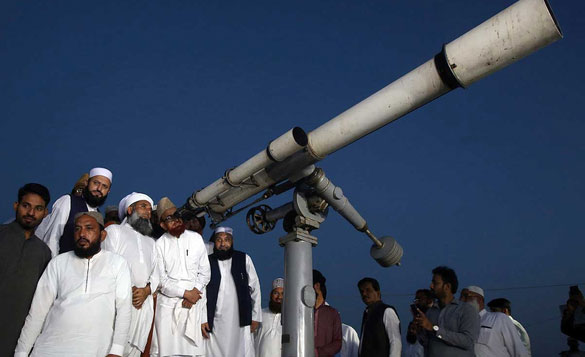 Clerics of Pakistan's Moon Sighting Committee use a telescope for the new moon that signals the start of Islamic month Ramadan, in Karachi on May 5.

But it was a gradual transformation. It was part and parcel of policies in various Muslim countries where the state was experimenting with ideas derived from fusing together modernity, nationalism and faith. Turkey and various Arab countries in the Middle East began to introduce telescopes, and ultimately astronomical calculations to predict the arrival of Ramazan and the two Eids. Committees were formed in which scientists sat with clerics. Over the next few decades, Turkey and most Arab countries had come to almost entirely rely upon astronomical data to determine various important lunar Muslim months and dates.

It is still rare for the Muslim world to celebrate Eid on the same day, though. Apart from the natural dynamics of moon cycles and different weather conditions that may make the moon visible in one area and not in the other, politics too plays a role in, let’s say, the disunity of Eid. For example, a bulk of Muslim countries follow the astronomical lunar calendar prepared by Saudi scientists, while many others follow the one prepared by Turkish astronomers. Then there are countries such as Pakistan, Malaysia, Egypt, Iran, Indonesia and Tunisia that have formed their own committees for this purpose.

The issue has as much to do with sectarian and sub-sectarian divides as it has with geopolitical rivalries between major Muslim countries. But whereas most Muslim countries now apply latest scientific methods to determine the start of the Islamic lunar months, some countries such as Pakistan seem to have gotten stuck. According to Dr Fazal Ahmed’s 1973 book, The Science of Sighting of Moon, the first government of Pakistan formed a committee of religious scholars who were to coordinate with members of the meteorological department to authenticate moon sightings.

A decade later in 1958, the committee’s announced date for Eid-ul-Fitr was challenged by a group of clerics in Peshawar, where Eid was celebrated a day before the rest of the country. In 1959, Field Marshal (self-appointed) Ayub Khan, who had come to power in 1958, lamented that the clerics were using Islam as a means to hinder progress. S.A. Ansari, in his essay for the 2011 issue of the Journal of Political Studies, quoted Ayub as saying that the clerics were doing “a great disservice to Islam.”

In his book, Dr Fazal doesn’t say exactly what modern methods were introduced by the committee to sight the moon. But in March 1961, after being convinced by a body of scientists about the accurate date of that year’s Eid-ul-Fitr, the Ayub regime bypassed the committee and directly announced the date. The popular Islamic scholar from Karachi, Ehteshamul Haq Thanvi, was the head of the committee at the time. Peshawar had already celebrated Eid a day before, after clerics in the city insisted that Pakistan follow Saudi Arabia’s lead. The majority of people in Karachi, on the other hand, followed Thanvi’s lead and observed Eid one day after the date given by the government. So, in 1961, Eid-ul-Fitr was celebrated on three different days in the country.

Almost the same happened in 1967. Dr Fazal writes that the 1967 episode was politicised by the religious parties after the regime discarded the date announced by the committee and changed it. The regime claimed the committee’s date was scientifically inaccurate. Ayub’s opponents decried that this was part of the regime’s “oppressive policies against the ulema”, while some Urdu dailies suggested it all boiled down to superstition “because the regime believed celebrating Eid on a Friday was a bad omen.” This was sensationalist gibberish, of course.

In 1974, when the issue of multiple Eids failed to get resolved, the government of Z.A. Bhutto gave the committee legislative cover. Thanvi was reinstated as the committee’s head and eight more members, including a woman, were inducted. The legislation did not require any compulsory coordination between the committee and the meteorological department. However, committee members were given better telescopes.

The October 1973 issue of the Pakistan Economist ran a feature on the debate a year before the legislation. The feature quoted various ulema who suggested that Pakistan should take Saudi Arabia’s lead. However, ulema belonging to the Sunni Barelvi sub-sect insisted that the country must follow the sightings of its own ulema. This idea was supported by scientists such as Dr Fazal who claimed that the nature of lunar cycles is such that every country must take their own path.

The legislation seemed to have somewhat resolved the issue, even though the committee never carried with it anything more than a telescope. No scientists were ever involved in the procedure. The call to employ more scientific methods returned decades later, when clerics associated with the then NWFP (present-day Khyber Pakhtunkhwa) branch of the committee began to follow Saudi Arabia’s lead. The dichotomy in Eid moon sightings between clerics in that province and the rest of the country intensified from the 1990s until one of the main figures in the controversy, the Peshawar-based Shahabuddin Popalzai, was arrested in 2017 and forced to fly out to Dubai.

Perhaps noticing that a majority of Pakistanis were never comfortable with the dichotomy, Fawad Chaudhry decided to adopt astronomical methods used in most Muslim countries to determine moon sightings. Committee members were livid.

In a country where, ever since the mid-1970s, the state and governments have continued to appease the point of views of clerics to evade religious controversies, Chaudhry threw down the gauntlet. And won. The irony is that he is a minister in a government that is mostly headed by urban conservatives. However, it was not his government he was banking on, but rather a powerful state institution. Some dailies reported that members of the committee, who were challenging him, suddenly withdrew their opposition after receiving a call from persons associated with that state institution. The institution has increasingly seen the dichotomy as an expression of national disunity. Chaudhry seemed to have based his move exactly on this observation.

Original Headline:  REACHING FOR THE MOON