Just when Pakistanis were increasingly experiencing ‘freedom’, using apps like Tinder, Imran Khan’s ‘Naya Pakistan’ — now a nightmare State for women, minorities, progressives — blocked dating apps for their ‘immoral content’. The message was clear: you can’t use technology to date people, but you can use it to support and encourage violence against those who you consider anti-Pakistan, anti-Muslim. This is why filmmaker Arafat Mazhar’s new animated film, Swipe, isn’t far-fetched. It imagines life with an app that crowdsources death sentences. 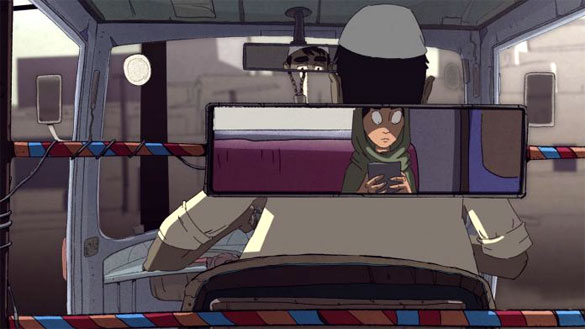 As attacks on minorities for blasphemy and women for their lifestyle choices rise, Swipe introduces to us an app called I-Fatwa.

The film follows Jugnu, a young boy who uses the app, I-Fatwa, to decide the fate of the people who end up on it due to some misdemeanour. Swipe left to forgive, or right to kill the person on the screen. The more right swipes the person gets, the more they are likely to be “Wajib ul Qatl” (worthy of being killed); they have to get 10,000 right swipes to be killed. The person playing, or rather swiping, also gets points and is motivated to score enough points to become a ghazi (defender of the faith).

None spared a swipe

When we first meet Jugnu, he is 50 points away from becoming a ghazi. He’s also considering the fate of a bride on screen, charged with eating paan at her wedding. We don’t know which way he swipes, but we do see him forgive a woman for misusing miswak (a teeth cleaning twig) later. However, a woman who violated her iddah (prescribed period of mourning for widows), and is a few hundred swipes shy of wajibul qatl, gets a right swipe. Jugnu also swipes left on a man who did not forward a WhatsApp message. 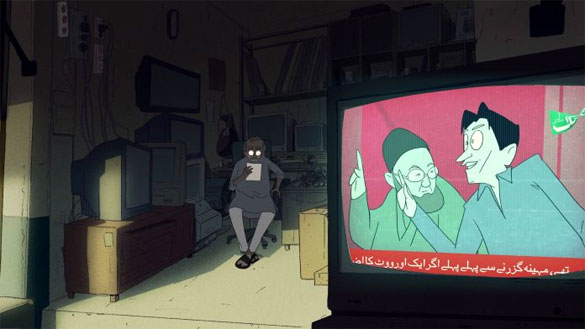 There’s no method to why he—or anyone else—swipes right or left. And it seems there’s no logic behind how a person ends up on the app for a ‘trial by subscribers’.

I-Fatwa makes its presence felt as Jugnu walks to school, swiping on his device, in a seemingly middle-class neighbourhood. The film’s animation, led by Haseeb Rehman, is remarkable. As Mazhar told me, the team “created a visual vocabulary that truly feels familiar to a Pakistani audience—something that we can proudly say is not borrowed, something that is ours at its very heart.”

A woman tells her vegetable vendor she’ll swipe right if the tomatoes are rotten again. A radio blares an ad by a phone company offering 50 free right swipes if you buy Rs 200 worth free credit. A woman tells another about Nuzhat, who was parading around college without a dupatta and how her case has come up on I-Fatwa. We hear a group of men in a tea shop gushing over the new filter on I-Fatwa, where a person’s head blows up when you swipe right. As the day progresses, so does Jugnu’s proclivity to swipe right. A child born with a devil’s sign on his head, a bride eating Paan, a woman who refused to get waxed, no one is spared. And therein lies the tragedy that befalls on him.

I-Fatwas’s currency is potent and its message is a searing indictment of the Imran Khan government.

Mazhar, a 35-year-old filmmaker, musician, and researcher, has been using Islamic arguments to tackle the blasphemy law through an advocacy group called Engage. He believes religious hardliners need to be brought to the table along with human rights campaigners, where they can engage with rather than antagonise each other. To that end, he’s done some work in rural Punjab and won some religious scholars over with his initiative.

But the wins, if they can be described as such, are painfully slow to come by. Violent incidents like the lynching of Mashal Khan in 2017, a progressive student at a university in Mardan, create fissures in society that can’t be reversed unless there’s a steely resolve of the State. However, each time the State caves.

In July, Tahir Naseem, mentally ill and in prison since 2018 on blasphemy charges, was brought to court in Peshawar for a hearing when he was shot by a man who claimed he dreamt he was ‘ordered’ to kill Naseem. In August this year, actors Saba Qamar and Bilal Saeed had to apologise for shooting a video in Lahore’s Wazir Khan Mosque after a case was registered against them for “defiling a place of worship”. The feared Tehreek-e-Labbaik Pakistan (TLP) leader Khadim Rizvi weighed in on the controversy by asking his followers, “Why should we leave the actors who are dancing in a mosque?”

“Pakistani authorities need no more evidence to see how dangerous the blasphemy laws are,” said David Griffiths, Director of the Office of the Secretary General of Amnesty International in a press release in August.

The State seems to have absolved itself of any responsibility on this matter, and since 2016, no efforts have even been made to present reforms to the law. A blasphemy accusation hangs like the sword of Damocles over academics, journalists, progressives, and the unsuspecting.

Mazhar’s film has received a lot of praise on social media from journalists in their personal capacity, but it hasn’t translated into much press coverage. Dawn said: “The short film matches those expectations, and then some.” Cutacut said that, while Swipe “amplifies the toxicity of the oblivion that surrounds us, not even for a second does the situation feel unfamiliar.” The Friday Times notes that the film comes “at a time when state surveillance has expanded to the realm of the internet.”

Mazhar has been featured on several independent digital outlets to discuss the film and his work on blasphemy and appreciates the support, wherever it has come from. 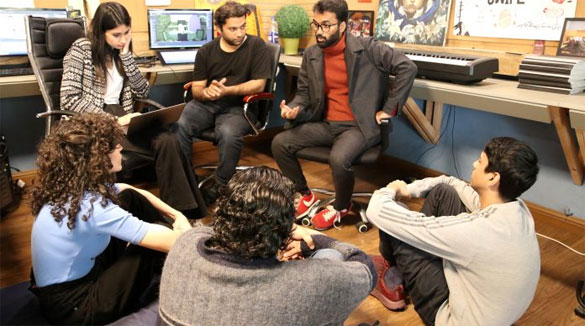 “I think the nature of a project like [Swipe] is to make space for conversation where very little exists, and a project like that can only be successful when others step forward to bolster the voice that is not being heard, so I do hope we will continue to get more of that support from local publications and media outlets moving forward,” said Mazhar.

Swipe is also a reminder of the small joys in resistance. That can be gauged from the near 1,000 comments of support on YouTube — where the film was released in November.

“The music with those lyrics, gosh, literal goosebumps! The state of the country is so close to what’s shown here,” comments one user. “This should be Wajib-ul-watch for every Pakistani,” writes another. I scrolled through the comments looking for something horrible, as is wont to happen on the internet. Instead one found comments with sentiments like this: “One YouTube Video Can Change Your Perception. This Is That Video For Me.”

“We have demonstrated that you can speak intelligently and empathetically about incredibly schismatic, difficult subjects in a way where introspection and conversation, as opposed to hate and violence, are possible,” said Mazhar. “Swipe is a push for indigenous filmmaking and storytelling that is made by our people for our people. From the beginning, before Swipe or even Shehr-e-Tabassum were released, I was certain that whatever stories I could produce had to be free and accessible to a Pakistani audience: the people these films are about, the people these films speak to.”

By uploading the film on YouTube for free, Mazhar has lost the chance to submit Swipe to a lot of international film festivals. This speaks volumes about his intent with the film, and who he wants it to reach first. Many Pakistanis, myself included, have yet to see the two Oscar-winning documentaries by Pakistani filmmaker Sharmeen Obaid-Chinoy, and I’m not blaming her for it insofar as I’m pointing out the lack of avenues for Pakistanis to watch stories made for them, about them.

“I think one of the most memorable remarks we have heard came up at our premiere screening when a student from GCU Lahore called the story a ‘Manto of our times’,” said Mazhar. “We have no pretensions of comparing Swipe to the literary contributions of a writer like Manto, but if the comparison is one of storytelling that holds up an unflinchingly honest mirror to society then I think we can gladly accept that that is what we have tried our very best to do.”

Muna Khan has worked in journalism since 1995, largely in Pakistan, some in Vietnam and the UAE. She has a Masters in journalism from Northwestern University and teaches news & feature writing to Masters Students at IBA in Karachi. Views are personal.