Despite the Onset of Modernity, Ramzan Kak, A Midnight Drummer, Practices the Age-Old Tradition Of ‘Sahar Khan’ 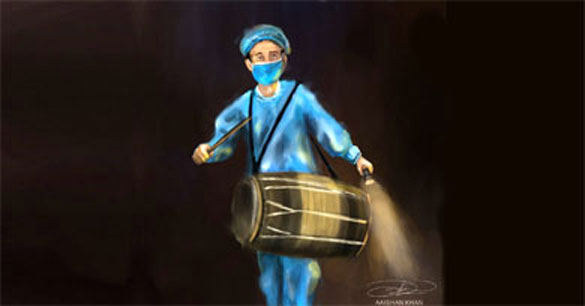 In the gloom of night, while the deserted streets of Kashmir were enjoying moments of quiet, I was knocked up by the rhythmic bars of drum beats and high-pitched hollers coming over from the adjoining lane.

“Waqt – e – Sahar” (time to have pre-dawn meals), a drummer casting at the acme of his voice, while moving from one lane to the next and beating his drum vigorously. Soon, as he nudged closer, the proximity of the sound made me realise that the voice was pretty overfamiliar to my ears. The drummer was none other than our local vegetable vendor, Ramzan Kak, who despite the onset of modernity used to practice the age-old tradition of ‘Sahar Khan’ (midnight drummer) from last 25 years.

As a child, I grew hearing to the melodious voices of Ramzan Kak, who would make enough efforts to sell vegetables all day long on the roadside and returned home late night, his garms drenched in sweat. He would doze off shortly after praying till late night, but would soon set out beating his drum to wake up the residents of his neighbourhood at sharp 2:15 A.M for “Sahur” — meals eaten before dawn for a particular time period of 30 days when Muslim families fast from sunrise to sundown and come together for prayers and copious meals sweetened by dates.

It’s an observance he treasures, just like his forefathers did, and one that he is trying to pass on as a legacy to the upcoming generation. In a distinctive Kashmir accent, he chants the hymns and scribes the songs while extolling the blessings of the holy month.

He would embrace focus on deep connection and one-on-one intimacy with Almighty by recitation of psalms, mostly in praise of the Prophet Muhammad (P.B.U.H). For most, Ramzan Kak’s passing has been a welcoming sign that the holy month of fasting and prayer has begun.

Ramzan Kak is still seen as a wake-up call and it’s very lively to experience the whole neighbourhood to hinge on to the punctuality of Ramzan Kak, considered a man of aught in our locality. In Kashmir, during the Muslim holy month of Ramadhan, thousands of drummers take to the streets in the eerie darkness of night. Ramzan Kak is one among them.

With a forehead full of wrinkles and eyebrows slightly elevated, decked in a traditional khan suit and a Karakul hat over his head, Ramzan Kak has been making these pre-dawn Ramadhan rounds for almost half of his life.

While some of the Sehar Khans do this job primarily for monetary gains, Ramzan Kak has been an exception, he would never seek any recompense, as to him it is a religious obligation to make sure all the people residing in his neighbourhood had Sahur properly and he staunchly believed in gathering rewards for afterlife.

He adheres by the belief of authentic spirit of Ramadan, which is preeminent of self-discipline, introspection, self-discovery, self-development and a journey of holistic growth and connection.

Amid the widespread use of modern and sophisticated gadgets, the night drummers continue to lend a distinct character and enrich the experience of Ramadhan. The Ramadhan drummer is a cross cultural tradition and is still established in many countries including Turkey, Egypt and Pakistan. But this Ramadhan has been no usual for the entire Muslim population of 1.8 billion.

Ramadhan under unprecedented lockdowns put a halt on all such customs and traditional practices. Quite evidently, I was awe struck to see Ramzan Kak after 19 days since the commencement of Ramadhan. I hurriedly got out of my bed and stood up and slowly removed the end of the curtain to see if I was not hallucinating.

The moonlit darkness had invaded the sky. I discovered twin shadows in semi darkness, of a man and his cobber (drum) near the street light to the left extreme of the lane and within a blink of eye, the shadows disappeared. To pump into the matter, I rushed to catch a glimpse of Ramzan Kak. As soon as I reached near the main entrance of my home, the voices began to faint. I proceeded a few steps ahead of the gate and finally found him near the next lane.

I was habitual of seeing him dressed in a traditional attire but his time, things were deviant. My eyes tried hard to ideate about and recognise him. All I discerned was the shape of a halogen light clutched firmly in the hands of a person whose body was duly covered within a PPE suit and a mask over his face, the strap of which was resting over the crown of his head. Such out of the way sitch would proofread the fact that things were no more prosaic. I was balbutiating as I stood in front of him. He conceived my state of hesitance, so he tugged down his mask to unveil his face to me. I greeted him and asked him about his wellbeing. After a round of offhand conversation, I lastly enquired about the reason to take up his job again after so many days in the thick of a pandemic.

To which he responded with a matey grin on his face, “RaathOosum Rashidun NechuWanaan Ramzan Kaka TottiOosukhAssiCxhiViznawan, AazPeoTreshi Peth RozdarRozun” (Yesterday Rashid’s son was complaining to me for no more being at hand to awaken him since he could just have a glass of water as Sahur). This incident had compelled Ramzan Kak to resume his duty of care.

An intriguing reality of him being a sole entity responsible for waking up thousands during the holy month bound Ramzan Kak to reinstitute the practice of hitting the streets with his drum to awake the people from their deep slumber.

Despite the technological shift, Ramzan Kak believes the tradition has its own charm and cultural value. There was a spark in Ramzan Kak’s eyes which drove him into an unswerving belief of serving the people, when he finally bid me an adieu, trod the road onwards while pulsating the drum strenuously. His voice started reverberating in the winds he passed by, the gleam of light began to dim and soon the voice began to sink.

Original Headline: An ode to a midnight drummer