A Decaying State Kills Its Minorities 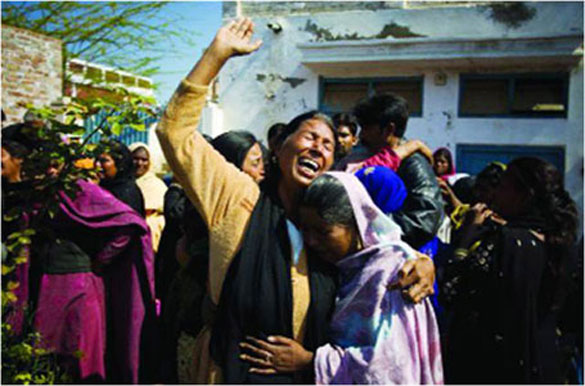 The people who target religious minorities in Pakistan had been nurtured as the state's proxy warriors; the state then surrendered to them its monopoly of violence

A 150-strong mob of pious Muslims in Islamabad committed vandalism, baying for the blood of a mentally challenged Christian child Ramsha because they thought she had burned the Quran. The police had her under arrest pretending it was for her own security. Earlier, a mad 'blaspheming' man in Bahawalpur was taken out of jail and burned to death. After the imposition of the Blasphemy Law the first major case was also against a 14 year old Christian boy in Gujranwala who had to be smuggled abroad to prevent him from being killed. 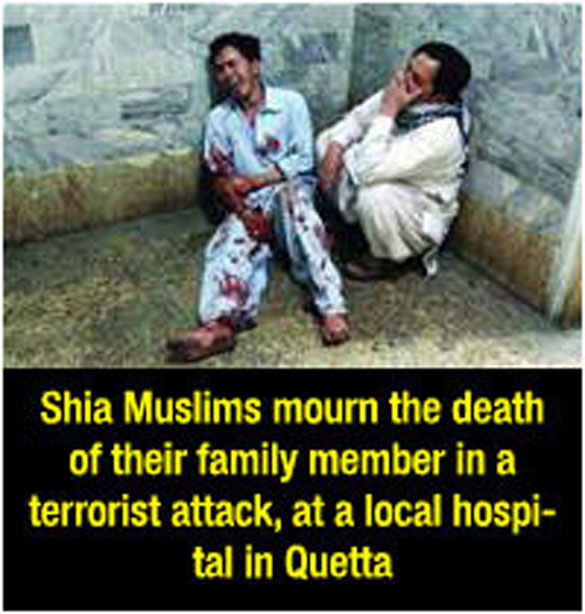 Hindus of Sindh have tried to migrate to India. (Nearly 568 FIRs for forced marriages were lodged last year across 40 districts of Pakistan, with the majority of such cases having been filed in Sindh.) Instead of sympathising with such fugitives, the liberal PPP government suspected them of being disloyal to Pakistan and stopped them - for some time - from visiting India. Hindus are the largest minority community in Sindh.

The minister who did that himself fears being killed by the elements who hunt Pakistan's Hindu community. The Human Rights Commission of Pakistan's Balochistan chapter has identified an ongoing exodus of Hindu families from Quetta too due to fear of kidnappings for ransom, yet the Balochistan government does not seem to be doing much to address this problem.

Christians living in the Islamic world are marginalised and threatened with persecution. But Pakistan perhaps began the trend. InFebruary 1997, the twin villages of Shantinagar-Tibba Colony 12 kilometres East of Khanewal, Multan Division, were looted and burnt by 20,000 Muslim citizens and 500 policemen. The police first evacuated the Christian population of 15,000, then helped the raiders use battle-field explosives to blow up their houses and property.

In November 2005, the Christian community of Sangla Hill in Nankana District in Punjab experienced a most hair-raising day of violence and vandalism. Daily Dawn (13 November 2005) described it like this:

Under the present PPP government, a Christian federal minister has been killed by Punjabi Taliban in broad daylight in Islamabad

'The burning down of three churches, a missionary-run school, two hostels and several houses belonging to the Christian community by an enraged mob of some 3,000 people in Punjab's Nankana district speaks volumes for the bigotry and intolerance against minorities. Following allegations of blasphemy levelled against one Yousaf Masih by his Muslim gambling partners who accused him of also torching the Holy Quran, calls were given from mosque loudspeakers to punish the local Christians'.

In May 2009, some 12 Christian families fled their homes in a village of Sahiwal because they feared that a dispute growing around an act of blasphemy in a school may result in their persecution. The village had at least 6,500 voters in it but the dispute - which may be political - was entwined with the other politics of blasphemy law.

The community cowered in the face of dire announcements being made from mosque loudspeakers. The 'blasphemy' incident took place in a classroom in a local school where a page of the Holy Quran was found with ink splattered on it when the school opened in the morning.

The same month, an incident put the world on notice about what Pakistan is moving towards. In Surjani Town in Karachi, some Pashtun neighbourhood miscreants wrote graffiti on the church wall saying: 'Taliban zindabad', 'Islam zindabad', 'Christians Islam qabool karo ya jiziya dow', etc, after which an exchange of fire wounded some Christians in addition to killing one.

When the state of Pakistan apostatised the Ahmadis through an Amendment in the Constitution in the 1970s, some observers opined that the Shia community would be next in line for exclusion and slaughter

The attack on the Christians of a Gojra village Korian took place in August 2009, after an alleged desecration of the Quran by the Christians in July 2009. Everyone including the Punjab chief minister anticipated the violence and cautioned the local administration in Gojra to prevent lawlessness. The fear was not that desecration had happened but that it will be conflated with blasphemy and the mobs will take the law into their own hands and go on a spree of murder.

If the state in Pakistan survives, it must call to mind the following articles of the Constitution that give protection to the Christians who form the largest religious minority in Punjab estimated to be between 2 to 4 million:

Article 20: freedom to profess religion and to manage religious institutions; Article 22: safeguards around education with respect to religious freedom; Article 25: equality of citizenship; Article 36: protection of minorities. But these rights and values enshrined in the Constitution have been undermined by a series of legislations related to the affirmation of the state's ideological credentials.

The introduction in 1984 of the Qanoon-e-Shahadat or 'Law of Evidence' reduces the value of court testimony of a Muslim woman and a non-Muslim male citizen to that of half a Muslim and, by extension, that of a non-Muslim woman to one-quarter. Similarly the introduction of a series of amendments to the Blasphemy Laws in the PPC [section 295], adding in 1982 section 295-B which provides for mandatory life imprisonment for desecrating the Holy Quran, and in 1986 the even harsher section 295-C, which is mandatory death in respect of the insult of the Prophet PBUH, exposes the broadly poverty-stricken Christian community to abuses of the law. 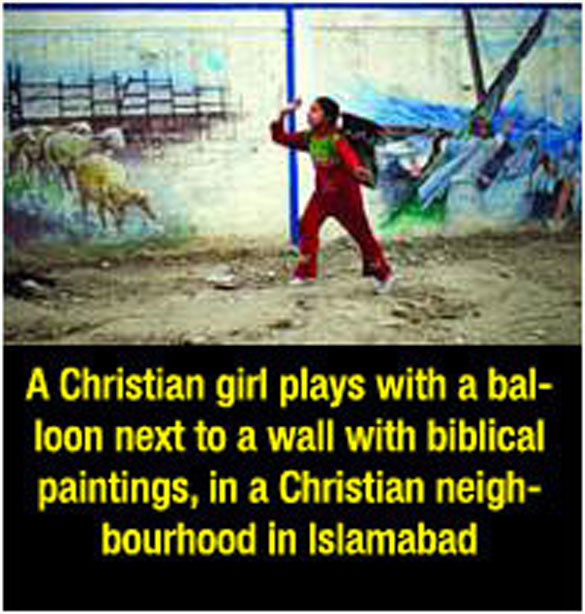 Most Muslims hold that violation of some human rights takes place because of the tough living conditions and poverty in the country. The view displays all the collective blind spots about human rights. It presumes certain conditions to exist against objective evidence to the contrary. It talks about the minorities in Pakistan without being aware of their view of how they are being treated. Under the present PPP government a Christian federal minister has been killed by Punjabi Taliban in broad daylight in Islamabad.

Today in 2012, you have TV anchors saying more or less the same thing: Muslims themselves are being maltreated, so the persecution of non-Muslims cannot be blamed on them. Going on a tangent, they allude to the Rohingya Muslims of Burma about whom the rascally foreign-funded NGOs have done nothing. (In Burma, the NGOs protesting Rohingya rights are savagely suppressed by the Burmese ruling junta.) The ominous sign in Pakistan is that the majority Muslim community is completely inured against what the minorities are going through.

The blasphemy law victims bear the brunt of the rage of the Barelvis like late Maulana Sarfraz Naeemi, secretary general of Tanzimat Madaris Dinia, who actually led a Lashkar to Sangla Hill to punish the Christians already mauled by local Muslims. He was later killed by the Taliban who think Barelvis are not good Muslims. The Deobandi rage is directed at the Shia community too. When the state of Pakistan apostatised the Ahmadis through an Amendment in the Constitution in the 1970s some observers opined that the Shia community would be next in line for exclusion and slaughter.

The day has arrived. Like the Ahmadis, the Shia are being killed all over Pakistan like lambs at the slaughter house without much disturbance among the Sunni community which leans on anti-Americanism to favour the Taliban and their ancillary warriors originally prepared by the Army against India.

The Shia are not named as a minority in the national census but are informally considered to be nearly 30 percent of the total population. A storm is brewing against them in the Middle East, and Pakistan could be considered as a country where it all began with the help of the state of Pakistan which nurtured the Shia-hating Deobandis and allowed its personnel in the intelligence agencies handling the covert war to be reverse-indoctrinated.

The al Qaeda-linked Lashkar Jhangvi in August 2012 published a gruesome video on jihadist internet showing the beheading of two Shia. In a statement that accompanied the video on one of the forums, a jihadist said Lashkar Jhangvi is part of al Qaeda and the Taliban. Two of the Lashkar fighters then pulled out knives, and proceeded to behead the Shia men. The victims' heads were then placed on their laps. The warriors wiped their knives on the clothes of the slain men.

The politicians turn their face away; the judges are scared of the clerical backlash. Pakistan as a state is decaying and is eating its minorities first. Before it becomes a pre-modern hell under Al Qaeda and its followers, it has to accomplish the task begun with the decimation of the Shia: it will eat its Sunni Muslims too. For the non-Muslims it is a prison from which there is no escape.

Pakistan was always dicey with its minorities because of its ideology, but today it is killing its minorities because it is killing itself as a state. The people who have undertaken this destruction have originated in the state of the Muslim mind today across the Islamic world, but their midwife in Pakistan was the Army which nurtured them as the state's proxy warriors and then surrendered to them its monopoly of violence.