If You Honour an Extremist Cleric Why Could You Not Honour the Prophet of Peace: In Modern Riyadh, A Bow to the Past 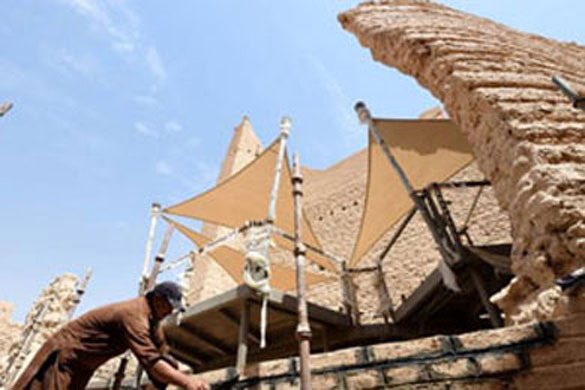 Photo: An Asian labourer restores an old building in the historical Atturaif district on the outskirts of Riyadh. Planned for the area is the Abdul Wahhab Foundation honouring the 18th-century fundamentalist preacher who co-founded Saudi Arabia. Photo/AFP

Saudi Arabia’s new research centre on Wahhabism, to open on the edge of the capital Riyadh, looks fitting for a branch of Islam considered inflexible, intolerant and unchanging.

Imposing with its limestone blocks, their bulk lightened only by glass-enclosed bridges, the centre is part of a major development project shepherded by Saudi King Salman. The building honours Sheikh Mohammed bin Abdul Wahhab, the 18th-century fundamentalist preacher who co-founded the Saudi state.

It is a clear sign that his legacy remains central to the Saudi soul despite his strict doctrine and accusations it is fuelling deadly Sunni extremism around the world, including the murderous drive of the militant Islamic State (IS) group.

Featuring cafes and palm trees decorated with tiny lights, the project is set in Addiriyah, birthplace of the ruling Saud dynasty, and includes the Unesco World Heritage Atturaif district.

"It has very high historical value for the government and for us," says Abdullah Arrakban, urban-development manager for the High Commission for the Development of Addiriyah. 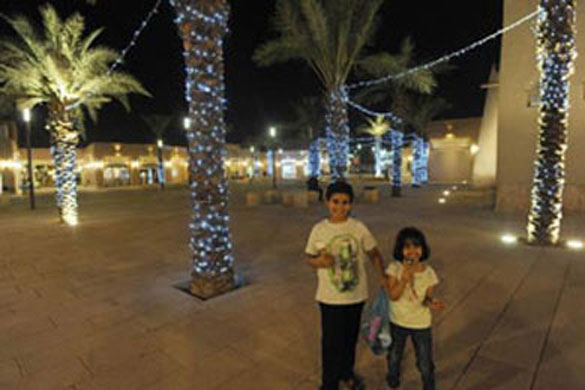 Here, King Salman, monarch of the world's biggest oil exporter, has a turreted palace overlooking the crumbled mud brick homes of his ancestors now undergoing preservation. And it was here that Abdul Wahhab's partnership with a contemporary local chief, Imam Mohammed bin Saud, laid the foundations for today's kingdom and its reliance on the sheikh's 270-year-old teachings.

Conceived in 2000, the project is targeted for completion by the end of next year. It has begun to refurbish the district, restore its ancient Atturaif oasis community and create crucial green space in this heart of the Arabian Peninsula.

Five mini-museums will depict life in the first Saudi state, which lasted from 1744 to 1818, when it fell to Turkish-Egyptian invaders.

Although the heart of the 750-million-riyal (Bt7-billion) project will be Atturaif, the adjacent Abdul Wahhab Foundation is designed to honour the sheikh's role as co-founder of the state and tell "the truth" about his intellectual heritage, Arrakban says.

It will feature a library of books and documents about his teachings, available for research, as well as a multimedia memorial hall illustrating the religious movement he inspired. At the centre of the foundation complex is a modern incarnation of the sheikh's original house of worship.

"The media try to say, 'No, he tried to kill, to make war.' I think this is not right," Arrakban says.

Abdul Wahhab preached tawhid - the oneness of God - which meant opposition to the worship of saints and to Shiism, a prohibition on images of living beings and the implementation of sharia law.

He saw his doctrine as a return to Islam as practised by the first generation of Muslims.

His pact with Saud in the 1740s gave legitimacy to the first head of the royal house, who in return implemented Abdul Wahhab's strict version of the Islamic faith.

The partnership continues to this day, with the ruling family maintaining its tight grip on political life and puritanical clerics preaching strict codes of conduct that make Saudi Arabia among the world's most conservative countries.

Women are forbidden to drive vehicles, there is no intermingling of the sexes, and cinemas and alcohol are banned, while the militant preaching associated with Wahhabi thought is accused of inspiring extremists from Osama bin Laden to IS.

Irfan al-Alawi, co-founder of the Mecca-based Islamic Heritage Research Foundation, says honouring Abdul Wahhab and preserving Addiriyah constitute "hypocrisy" at a time when "Islamic heritage is being wiped away" elsewhere in the kingdom. "If you honour an extremist cleric why could you not honour the Prophet of Peace?" Alawi asks.

In keeping with Abdul Wahhab's teaching against idolatry, authorities have made no effort to preserve sites linked to the Prophet Mohammed in the holy cities of Mecca and Medina, says Alawi, a prominent supporter of Islamic pluralism. Some of these sites have already disappeared in redevelopment, he says.

Alawi is among those who contend that Wahhabism has inspired the militants of IS, also known by the Arabic acronym Daesh. "You have first, Wahhabi ideology, and then you have offshoots which have become even more extreme," he says.

Yet "Saudi Arabia is not Daesh", says Stephane Lacroix of Sciences Po University in Paris, stating that Abdul Wahhab left politics to the politicians.

"The political authority puts a number of constraints on the religious authority which in a sense limits the kind of radicalism that can come out," he says.

Lacroix adds that some of the country's youth "don't really feel Wahhabi at all" as Saudi society changes under modern influences.

In April Salman opened part of the development - parks and restaurants in the Al-Bujeiri quarter that overlooks the Atturaif ruins. Women clothed in black according to local custom sit on concrete benches as families push strollers across a central plaza.

Tariq al-Muaiseb, 24, one month into a banking career, says he and colleague Abdullah al-Khayyal, 23, hope to explore the Atturaif ruins to see "how our grandfathers lived", in contrast to their own "Western lifestyle". Leaving an outdoor cafe, they walk over to photograph the Abdul Wahhab mosque. "He's had a large effect on this country," Muaiseb says.