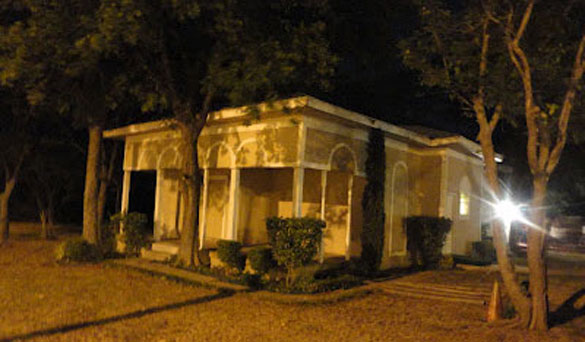 The Imam; Imam Yahya Abdullah is one of the old timers and goes back to the movement of Imam Warith Deen Muhammad, also known as the Nation’s Imam. He has been a part of many of the events we have done and we know each other for at least five years.

He is well known for his interfaith work. Indeed, Imam Warith Deen Muhammad is the first Muslim to initiate the interfaith Dialogue in America. Imam Abdullah and Imam Qasim were students of Imam WD Muhammad. More about them at - http://dallasmuslimcenter.blogspot.com/2012/08/wd-muhammad-appreciation-week-in-dallas.html

Nearly 2 Million Muslims switched from Nation of Islam to Sunni Islam. The WD Muhammad group makes about 1/3rd of Muslims in the United States.”

The Masjid is located right on Belt line; this is the 3rd loop road around Dallas and runs on the south side of the town going through Desoto.  On the north side of Belt line is Chapel Downs, a home subdivision. Instantly I was in my glorious past, way back in 1985, when I was a community manager for Ryland Homes, I wrapped up that neighbourhood with the last few homes we had built. By the way the company had given me a cell phone, that had a huge steel suit case placed in the trunk of my car, and the wires were cut through to the front. I was driving nearly 150 miles a day that year driving from Denton to Desoto and Mesquite to Bedford, closing down subdivisions with a few lots left in each place, right before the market collapsed in 1986. 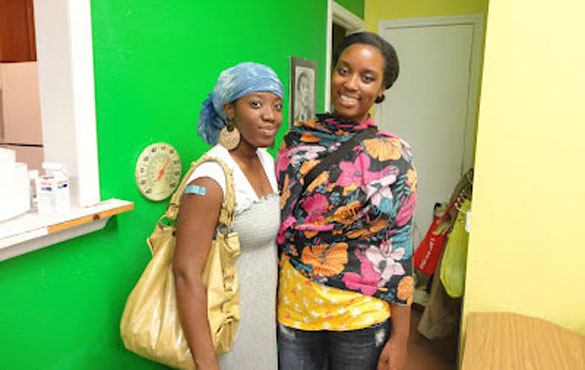 The atmosphere at this Masjid is more like a family gathering, mixing and mingling with each other. I made it to the Mosque a minute before Iftaar as I was stuck in traffic going through downtown Dallas on a Friday night. I wish I had gone earlier, there is 8 acres of land of this mosque with trees and I would have loved to take some pictures.

In the Warith Deen Tradition, the men and women sit together and break the fast, indeed; it highlights the cultural aspect of Islam. It’s only in America we have come to know that Islam as practiced has the religious and cultural components in it, in most other nations, both are intertwined and hard to distinguish between the two.

By the way, their teen girls have an outstanding Musical dance performance group. I have watched them perform at Family Federation church and the Lifeway Church. Their actions symbolize different aspect of prayers (Salat, namaz), it is amazing. Insha Allah, we may ask them to perform in our annual Thanksgiving Celebrations program; a cultural pluralism program of musical expressions. 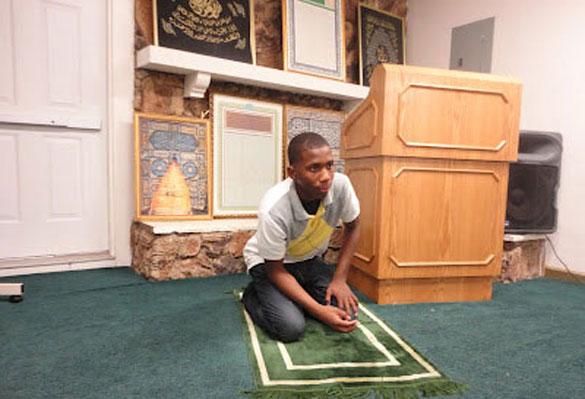 The Maghrib prayers were led by Khairi Muhammad, 14 year old student of Imam Yahya. It was refreshing to see this; the Imam lets his students lead the prayers. He said; let them practice it early on!

What a joy to see the Masjid overwhelmed by young kids, both male and female, most of them prayed the fard (obligatory) as well as the optional prayers. Thanks to the management and membership of the Mosques for participating in picture taking and sharing.  I am glad Imam Yahya asked the congregation for taking the pictures and everyone was a happy participant. 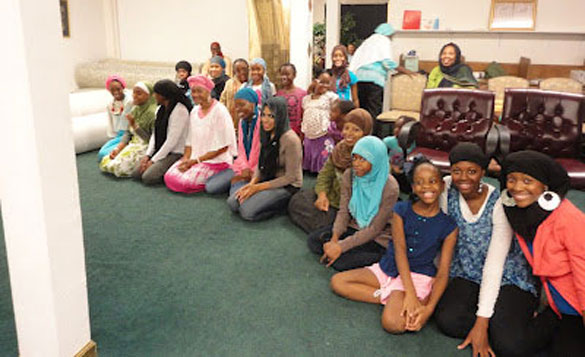 The ritual prayers are identical to most of the Sunni Mosques, the only difference I noticed was in the Tashahhud position, and most of us lift the fore finger when we recite, “Ashhadu-an La Ialha Illal La”, but they were lifting the fore finger and the middle finger together, it was more than three people doing that in the Sunna prayers to ignore as a personal thing.  I forgot to ask the Imam about its significance, or it is simply a matter of he did it, I do it too!

Thanks to Imam Yahya Abdullah, here is an update from him, "The 2 fingers during At-Tashahuud is because we are making Shahadatain (2 witnesses) not one, 1) La elaha illal Lah, 2) Muhammadan Rasuulu-Lah, as we know ALLAH and Muhammad The Prophet are not the same. First finger for ALLAH and the second finger for Muhammad the Prophet. Imam W. Deen Mohammed taught us this." 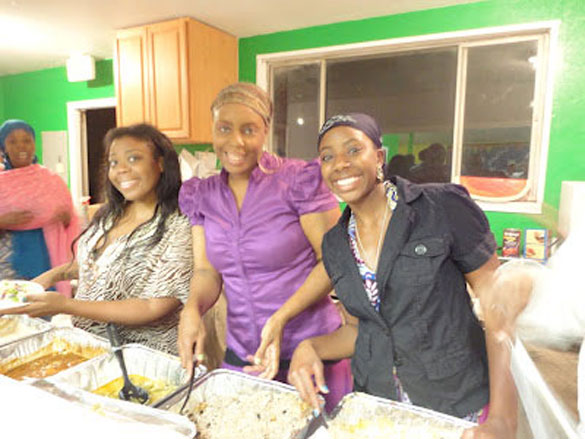 Dinner was non-Asian and non-Middle eastern for the first time in 22 days! It was fish with Barbeque Sauce on it with Brown rice and Salad. I have had barbeque in every fashion, but this was the first time with fish. Oddly it was cooked by a Lebanese itna-Ashri Shia couple and not middle-eastern food. Good food for a change!  The brother believed that the Sunnis follow the12 imams, the three of us, Imam Yahya, Marzuk and I assured him that it is not in the Sunna and not a Sunni tradition. He thought that was Sunnah. Most Sunnis assume that all Muslims do what they do. 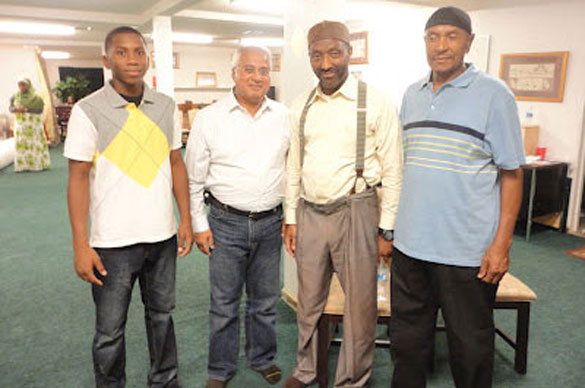 The lady across me in green shirt was visiting from Little Rock Arkansas. She was considering doing her Ph.D in psych or pursues a law degree.  Her joy was that the sisters were marrying Muslim men; I guess that is the case with all sisters in every faith in the world to marry within the community. It is particularly pronounced among Jews and Muslims, more than others.

Marzuk is also one of the recipients of the “Pluralist” recognition that the Foundation for Pluralism honors every year at the Unity Day program.  He pioneered an educational series called Abraham in three faiths, Moses, Jesus and Muhammad in three faiths, a great educational program. Insha Allah, he plans to resume that this September. I wish, I really wish, Muslims from other traditions attend this and enlighten themselves.

Interestingly the dinner conversation involved China, almost everyone on the table was doing business in China, recycle, men’s suits… you name it. A few people call this China Masjid.

They have enough space on their grounds to do the Eid prayers along with other WD Muhammad tradition mosques.

Each mosque and each tradition is uniquely different.  Insha Allah, I will do my best to keep that uniqueness intact, however, it is not easy to write different things each day for the whole month, and we have just about 6or 7 days left!  I hope this has been a meaningful journey for you. I urge you to jump in experience it yourselves.

Please mark your calendar for Tuesday, September 11, 2012 - 11:30 AM to 1:30 PM at Unity of Dallas, a positive event that brings all Americans Together to rededicate our pledge for a peaceful, prosperous and secure America. We are a part of America and we need to feel and live it.  If you liked some of the article, you will like the description of Unity Day USA at www.UnityDayUSA.com

No American has to live in apprehension or fear of the other. There are solutions; here is a trailer of the movie in making:  http://www.youtube.com/watch?v=YMXsTo4VYh8&feature=youtu.be