Neo-Renaissance of Saudi Arabia: Some Will Sneer What Do Arabs Have to Do with Renaissance?

The world will turn its attention to Saudi Arabia this year as the Kingdom hosts the Future Investment Initiative global conference under the theme of neo-Renaissance. Some will sneer: what do have Arabs to do with renaissance? I meet this arrogance and amnesia often. In fact, the Arabs have a long and rich history of civilization and renaissance. This history serves as a deep base on which to build a new future and lasting prosperity. 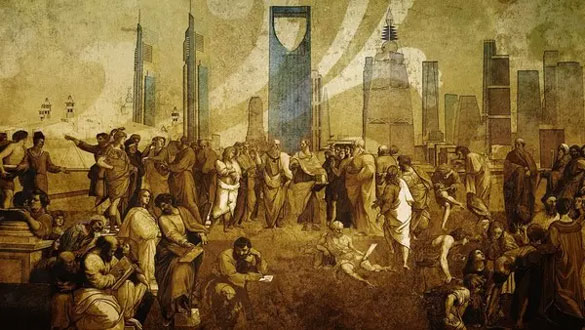 Six points illustrate how the Arab world was central to civilization and renaissance throughout its history.

First, the Arabs, even before Islam, always held the Greeks —forefathers of Western civilization—in high respect. It was Persia that attacked and repeatedly invaded ancient Athens and unleashed half a century of war. Seeking to add Greece to their empire, the Persians destroyed the original Acropolis, inspiration of art and architecture to this day. The Persians failed. The Arabs, however, from earliest times saw the Greeks as allies and family. Yunān (hence Ionian), forebear of the earliest Greeks, was believed to be the brother of Qaḥtān, ancestor of the Arabs.

Greek reason, laws, ideas and institutions continued with the rise of Rome. Herodotus wrote warmly of the Arabs as traders, merchants, and a loyal people of civilisations, including that of the Nabatean Arabs in Petra. That cultural acceptance of the Arabs as natural allies and loyal citizens led to Philip the Arab (Marcus Arabus) becoming Emperor of Rome. The Persians were at war with Rome, too. The Roman-Iranian wars lasted for 700 years (54 B.C.-628 A.D.). If the West remains suspicious of Iran today, it is partly because of this long Iranian aggression dating back to antiquity.

Second, with the coming of Islam, the Prophet Muhammad found himself in Mecca during this long war between Iran and Rome. Famously, the Prophet sided with Rome: His pro-Persian pagan opponents mocked him for being a Roman ally. He owned a Roman shirt and believed in the sanctity of the Christian faith, by now the religion of Rome. He called to the principle of a rational belief in the one God of Abraham, Moses and Jesus, and firmly rejected Zoroastrianism, Manichaeism and the other pagan belief systems of Persia. The Arabian prophet created a community of committed monotheists.

It was these Arabian believers that the Prophet molded in Mecca who went on to change the world and create civilizations. By the seventh and eighth centuries, Christianity became doctrinal and dogmatic, closed to philosophy and free inquiry. Tertullian, an early church father, asked dismissively “What does Jerusalem have to do with Athens?” Hardline Christians destroyed the academies of Greek philosophy in Athens and burned the libraries of Alexandria, killing Hypatia the Philosopher for her rejection of Christians. What Christianity closed, Arabian Muslims soon sought to open.

Third, the Quran commands believers to read, reflect, think and ponder repeatedly throughout the text. That spirit gave birth to the first great Arab philosopher al-Kindi, who was then followed by others with undeniable Arab influences in their thinking and choice of Arabic for writing, including al-Farabi, Ibn Sina, Ibn Tufayl. Where Christians had dismissed Greek knowledge and wisdom as pagan, Muslim philosophers led a new Renaissance from al-Kindi and al-Fārābi to Ibn Khaldūn, of Yemeni Hadrami heritage, who cherished the words of Socrates, Plato and Aristotle.

The court of the early Umayyads in Damascus was so eager to learn from and about the new peoples they had conquered in Syria and Egypt, that the Caliph Mu’awiya, a scribe and wise Meccan companion of the Prophet, held sessions of debate and discussion in court on history, theology and philosophy. The Umayyads happily absorbed Roman modes of governance as testified by their retention of Christian Roman civil servants, including Saint John of Damascus who wrote extensively of his experiences.

Fourth, the Arabian believers did not wait to be attacked by the Persians as the Greeks and Romans before them, but took war and conquest successfully to Iran. That Islam rescued Iran from paganism and permanent warfare against the rest of the world is thanks to the Arabian Muslims that subdued a nation of long wars against Greece and Rome. Arabs and Islam now dominated large parts of the previous Byzantine and Persian territories and with that unity of faith came a new renaissance of inventions, science, confidence and books that shaped the world. But the spirit of philosophy was not to last: The Persian mystic, Imam Ghazzali, declared Aristotelian philosophers of Islam to be disbelievers. That rejection of the free mind, critical intellect and philosophy was quickly institutionalised. But not so easily.

Fifth, Ghazzali’s attempts to close the Muslim mind were rejected by the great jurist and philosopher, Ibn Rushd (famous in the Latin West as Averroes). Ibn Rushd wrote books, taught students and advised Spanish Muslim rulers making the case for philosophy as “ḥikmah,” wisdom, that Muslims are religiously obliged (“wajib”) to protect and pursue. Ibn Rushd’s greatest contribution to civilisation was not only that he refuted Ghazzali, but this great Arab philosopher found ways to reconcile reason and religion, two valid ways in which to seek truth. It was that method of reason and rational thought of Arabian philosophers that gave Andalusia eight hundred years of a booming civilisation, until 1492 when Jews and Muslims were expelled by Catholic monarchs Isabelle and Ferdinand. Ibn Rushd and the Muslims of Andalusia were descendants of Caliph Mu’awiya, the Umayyads. In the Muslim East, Arabs gave way to others to rule: ‘Abbasids, Seljuks, Mamlukes, Mughals, Ottomans. But in the Muslim West, Andalusia, Sicily and Portugal it was the Arabian spirit of Mecca that shone.

Sixth, this renaissance of Muslims in Andalusia, shunned by the East, was fully embraced by two other religious civilizations: Catholicism and Judaism. The Judeo-Christian civilization that is the modern West is rooted in the rational methods of Arabian thinkers, particularly Ibn Rushd. In the universities of Paris, Padua and Oxford, ‘Latin Averroists’ emerged as those who saw, like the ancient Greeks, reason and philosophy can lead us to truth too. The Christian mind was now again open to philosophy in the form of the Scholastics. In Judaism, it was the great rabbi, Musa bin Maimun al-Qurtubi al-Israili (known as Maimonides) who merged Aristotelian philosophy with the Talmud. In our times, the great philosophers of the English-speaking world, Bertrand Russell, Leo Strauss and Roger Scruton acknowledge the Western debt to Arab Muslim civilisations in the West.

What the Arabians gave to the West and Israel, Saudi Arabia should now reclaim and revive at home and abroad again. The neo-Renaissance is rooted in this deep history of open-minded Arabians from Mecca that rekindled what Spinoza called the ‘natural light of reason,’ to strengthen our faith in God with use of our intellect—not sheepish adherence to fatwas of clerics and ayatollahs who forbid Aristotelian philosophy of critical thinking. Adam Smith wrote his “Wealth of Nations” with observations of human behaviour and rational choices in the markets that are identical to the Arabian sociologist Ibn Khaldun.

For Saudi Arabia to promote the ‘natural light of reason’ in its neo-Renaissance is to fulfil what its ancestors did for humanity previously for many centuries. Prosperity comes from philosophy: the harmony between reason and religion. Doubt me? Read Ibn Rushd and then Adam Smith. Where Saudi Arabia leads, 1.8 billion Muslims will follow.