Yes, Saudi Arabia has banned snowmen and lashes women, but it also has a lot of internal debate.

Despite the passing of King Abdullah, Saudia Arabia’s new King Salman Bin Abdulaziz Al Saud claims it’ll be business as usual in the controversial desert kingdom where a recent spate of public floggings and beheadings overshadowed the ailing 90-year-old monarch until his death last week. Oil prices even fell after King Salman said he would stick to long-held strategies and not reduce production to increase prices. 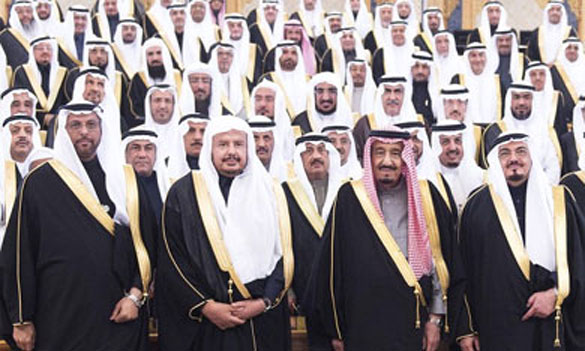 But will King Salman be able to control the clergy as well as the petrol? The powerful and unpredictable religious establishment tied to the Saudi royal family since the country became a state wields a complicated influence over Saudi society—more so now that many prominent religious leaders are stars on social media and a few subtly support ISIS and al Qaeda. King Salman is said to be more loyal to the clergy than King Abdullah, who was eulogized—some believe a bit misleadingly—as a great reformer.

“The royal family and the clergy have always had a very symbiotic relationship,” says Nabil Mouline, author of “The Clerics of Islam: Religious Authority and Political Power in Saudi Arabia” and a researcher at the French National Center for Scientific Research. “They need each other and want to keep the status quo. Too much modernization could upset their comfort zone.”

The kingdom’s clerics usually come across in Western media as buffoonish or barbaric characters issuing ridiculous fatwas while apparently making the royal family toe the fundamentalist line. They are the most visible link to the country’s extreme brand of ultra-conservative Islam, called Wahhabism that stems from a pact made with the House of Saud with a rogue Islamic preacher, Muhammad ibn Abd al Wahhab, in 1744. The somewhat Faustian bargain helped ensure the growth and stability of the kingdom. The religious establishment is still key to giving the regime sorely needed legitimacy at home and abroad.

But the cartoonish clerics, say some experts, are not the ones who matter inside the kingdom. Independent clerics (called scholars or sheikhs by Saudis) not tied to the royal establishment are taking over social media platforms, some with millions of followers. They’ve become harder to control and could challenge the Saudi government more unexpectedly than they have in the past.

“You know how the West has celebrities?” says Sarah Alotaibi, 35, a Saudi Arabian wife and mother who has joined the ranks of women working as cashiers in the country’s malls. “These guys are our celebrities. We’re an extremely young population and we’re interested in issues. Everyone goes online every day to see what they’re saying. It’s like tracking Kim Kardashian.”

What some call the “New Preachers” might finally edge out the clerics best known for their zany fatwas, which Alotaibi and others say have served a purpose not immediately evident to the West. While quietly exporting strict Wahhabi Islam to other Muslim countries around the world by reportedly funneling billions of dollars to them, the Saudi government pretends it is hamstrung at home when it comes to serious reform because of the notorious clerics.

“Those guys are just being used as scapegoats,” said social activist Ahmed Algofaili. “The government can limit reforms and excuse human rights abuses while making it seems as if they’re only doing it to appease these wild characters from the seventh century. The biggest misconception is that all clerics are the same. Some are progressive and they’re not all anti-women. The ones issuing these crazy fatwas are a minority. We don’t even take them seriously.”

Abdullah Alaoudh, 31, the son of one of the most powerful independent clerics in Saudi Arabia, Dr. Salman al-Awdah, said the stereotype in the West is that the Saudi royal family wants to be more liberal. He says that’s “nonsense.”

“History tells us the Saudi government isn’t really interested in reforms,” said Alaoudh who’s studying for his doctorate in constitutional law and the post-revolution religious establishment in Arabic countries at the University of Pittsburgh. “They can be compromising on a small scale about things that don’t really matter, just to buy the West’s silence.”

“They like all the attention the crazy muftis and fatwas get in the West,” he added. “It’s about saying, see how conservative and close-minded they are and how liberal we are and what we face trying to do these liberal things. At the same time they tell us, the local people, see how much we respect the scholars. They play both sides against the middle.”

Since 1993, when Grand Mufti Sheikh Ibn Baaz issued a fatwa saying the earth was flat and the sun revolved around it, kooky decrees coming out of Saudi Arabia invariably generate international headlines despite recent government rulings supposedly aimed at curtailing who can issue them.

This month, snowmen were in the clerics’ crosshairs. Specifically they forbid the building of snow statues by fathers for their kids when a snowstorm hit the northern part of the country, saying they were anti-Islamic.

Last year, one prominent cleric said all female babies should be outfitted in Burqas to guard against possible molestation. Another conservative sheikh issued a fatwa saying driving would damage women’s ovaries.

In 2010, a sheikh issued a fatwa calling for women to breastfeed adult men, the idea being to circumvent laws forbidding unrelated women and men to mix by “bonding” the two. Other fatwas called for, variously, a prohibition on travel since “anyone who dies in the land of infidels goes to hell,” and advocating the beheadings of some owners of Arab satellite TV channels for broadcasting content deemed to be “sorcery.”

The reality is that the religious scholars in Saudi Arabia number in the thousands. Jonathan Schanzer, co-author of “Facebook Fatwa: Saudi Clerics, Wahhabi Islam and Social Media” and vice president of research at the Foundation for Defence of Democracies, estimates there are 7,000 to 10,000 members of the clerical class but only about 40 of them are considered the most senior scholars. Some of the most prominent are appointed to the Council of Senior Ulema by the government; they are considered “official clergy.” There are just as many independent clerics.

“The Saudi royal family wants to use the official clergy to reinforce barbaric laws so they can reinforce draconian rule,” Schanzer said. “The danger becomes the unofficial clergy, those who don’t want to cooperate with the royal family and call for policies different from what the regime wants.”

Which is not to say any of Saudi Arabia’s three most popular clerics—Mohamed Al-Arefe, 44, who has more than 10 million Twitter followers, Aiedh Alqarni, 55, or Salman al-Awdah, 58, both of whom have about six million followers each—are liberal by western standards. Al-Arefe, who also had a popular TV show for years in which people (mainly women) called him up for religious advice on the air, is very conservative.

A number of them, including Al-Arefe, Alqarni and Al-Awdah have been arrested and/or imprisoned at various times in their careers, moving in and out of favour with the Saudi government. Most haven’t exactly shirked on their religious studies, either. Memorizing the entire Quran as a teenager is how many start, said Alouadh, who said he had it mastered at age 15.

Al-Arefe doesn’t believe women should drive. He was detained briefly by Saudi authorities in 2013 over possible suspected involvement in the Egyptian coup d’etat and has been banned from Switzerland and the U.K. because of his extremist views. He once said in a TV interview that Osama Bin Laden was the victim of “character assassination” though he later back-tracked his remarks. Like other superstar clerics, his comments can provoke, incite—and entertain.

“A lot of the influential scholars on Twitter are socially smart and ambitious,” says Abdullah. “There’s envy between them and little Twitter wars erupt every week over these internal debates. I follow a lot of them and just laugh my ass off.”

Al-Arefe’s popularity stems as much from his looks as his views, according to Alotaibi and Alaoudh. “He’s handsome,” says Alotaibi. “Or at least he was 10 years ago. Women were throwing themselves at him.”

Even though he doesn’t want them to drive?

To make things more confusing, Saudi Arabia’s dizzying array of clerics often play down some of their more controversial remarks but change their opinions dramatically. Last month the cleric Sheikh Ahmad al-Ghamidi, who once ran the Mecca branch of the country’s notorious religious police, brought his wife, unveiled, onto a major TV talk show and announced that women should not be forced to wear the Niqab. He’s also said that women should be allowed to travel on their own and music should be permitted in the kingdom.

Salman Al-Awdah, now considered one of the country’s more moderate and respected clerics, said he’s pretty much resigned to his country being misunderstood.

“For the outsider in the end, weird fatwas and opinions are what stays over and over,” he told the Daily Beast. “They may never know the wide diversity of debates among us.”