Of Haircuts, Pakoras and Pink Lemonade

For me, growing up as an expat, Ramadan has been largely about celebrating my Pakistani heritage.  Living in Buenos Aires, in the late 80s when Muslim communities were still a rarity, the act of observing and celebrating such an occasion was often relegated to a handful of Pakistanis who were able to brave sundown in the Argentinian capital.  At the time, the country was going through one of its worst economic crises; burglaries and home invasions were rampant and almost everyone had a story to share about pickpockets and lost car stereos.

As Ramadan would approach, our burgeoning community would plan rotating Iftar open houses.  Several families would volunteer to host Iftar throughout the month, allowing people to break bread and pray together.  Occasionally our tiny community was joined by other Muslims passing through Buenos Aires.  In the case of the Davids (English boy falls for Pakistani girl), his job as an engineer took them all the way to  Tierra Del Fuego, an archipelago off the southernmost tip of the South American mainland, known for its tourism and massive petroleum reserves.  Then there was Bashir, a Tunisian whose wedding I was fortunate enough to attend, where I caught my first and only bouquet of flowers! I was only 10!  Finally, there was Sadia (a passionate Kashmiri, presently a lovely doctor and mama), who would go on to become one of my closest friends. (All names in this post have been changed.)

Unfortunately, during my time in Buenos Aires (as a preteen), I did not fast regularly.  I was really interested in sports, and with PE and intramural soccer, in addition to my studies, did not fast during the week.  I remember coming home in tears one afternoon, having overexerted, feeling weak and disoriented.  After that, my parents nixed fasting on school days and instead allowed us (my brothers and I) to fulfil our religious obligations on the weekends.

Fasting also meant explaining to my fellow fifth-graders why I was starving myself and sadly saying no to the cafeteria lady when offered the dulce de leche cone (gooey caramel on waffle) that was part of the Friday pasta fun meal at my school’s cafeteria.  This was before having Hussein as a middle name was cool (you know, since Obama and all, and even then I’m not sure if it’s not a hindrance to him).  Needless to say, while most were “whatever” about my eating habits, a couple did want to save my soul, and another teased me about having to fast on the orders of Saddam Hussein (who was alive at the time and most certainly in Bush Sr.’s crosshairs). 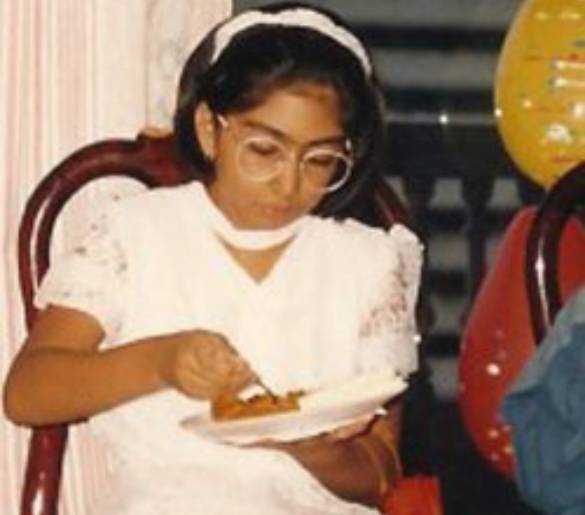 Taken at a birthday party in Buenos Aires. All I remember is that dress, acrylic and so uncomfortable, but my mother made it and it was the 80s!!  It’s also unibrow prominent, something I don’t escape till years later.

The Ramadan before my 11th birthday, and of course because Eid was coming up, I was finally allowed to cut my hair, which was long, black, and nothing like the fun, short tresses my friends wore.  I grabbed Sadia (by then my BFF), and with our mothers in tow drove to one the salons in our neighbourhood.  You know the salon’s posh because they serve you cortados while you’re waiting.  Cortados are like tiny lattes – espresso and warm milk in shot glasses, usually very sweet, probably why my mother let me sip on them when I’d accompany her to one of her perm sessions.  Obviously, I was fasting and told Claudia (the awesome hairdresser and the only woman who I knew could speak with a limp cigarette hanging off her lower lip).  “Why?” she gushed in Spanish, “Don’t you like them anymore?”  Sadia, who had a much better understanding about religion (read: was smarter than me) answered.  She explained, something along the lines of how we were practicing our religion, but I had largely tuned her out, too busy making blue steel faces in the giant mirror before me.

Half way through my haircut, I started to panic.  I turned to Sadia, who was rifling through a magazine (something Spanish -  she’d never be caught dead with Teen Beat or anything with the word “teen” plastered across it, unlike myself, duh).  Apparently, I hadn’t really thought this through.  My hair was disappearing before my eyes.  Slowly, I realized I didn’t want it cut short.  At all.  So there I was clutching the other uncut half, bawling into Claudia’s arms.  My mother meanwhile couldn’t stop laughing.  She’d hug me and then giggle a bit and then giggle some more.  Sadia’s mother took over eventually, petting me and telling me not to cry.  I could hear Claudia complaining about how I hadn’t even eaten all day, looking disapprovingly at my mother over the top of my head.

Sadia kept making pouty faces from her high chair next to me, knowing she wanted to comfort me but was held hostage by the other hairdresser, wet clumps of hair sticking to her face.  She held my hand while I sniffled throughout the remaining haircut.  “It’ll grow back”, she whispered squinting through the wet strands.  Gathering every last bit of courage (like only a 10-year-old drama queen can), I let Claudia finish up with my hair, intermittently squeezing Sadia’s hand whenever the cold metal of the scissor touched my skin.  Although my hair felt foreign to me, the blow-dry had left it shiny and swishy-new.  I felt so grown up, and after that, took every opportunity to flip my hair through every mirror in the house.

Iftar that evening more than made up for my disastrous hair day.  Sadia and I returned home to a massive take-out feast, drank glasses upon glasses of pink lemonade, and munched on deep fried chick-pea treats called Pakoras, which my mother whipped up in a pinch.  Sadia, her amazing family, and my own, sitting around a tiny table meant for six, stuffing our faces with Chinese food and generally making a mess of it all.

I am fortunate; my experience as a Pakistani-Muslim in Argentina was an incredibly positive one.  In hindsight, I realize that I lived in a far more accepting and tolerant world than I do now.  Although there is greater appreciation and awareness of the differences amongst us, it still comes buoyed with pinches of intolerance and xenophobia.  Even within our respective Muslim denominations – nobody cared how you prayed, just so long as you did it together.  You were a foreigner in a distant land, and with a few greetings of salaam, a connection is made and another plate is set on the table for Iftar the following evening.

I am so grateful to the Almighty for allowing me to experience this because it gives me hope that we can still reclaim that sense of community that is increasingly being lost to the rising evangelicalism in Pakistan.  Ramadan is about forgiveness and blessings and opening a gateway to divine love, but it is also about family and those moments we’ll share with people who waltz into your life when least expected.

I didn’t meet Sadia for many years afterward.  Until Facebook of course.  I guess Facebook does have its uses after all.

PS I also want to take this opportunity to share my mother’s recipes for pink lemonade and Pakoras.   Enjoy!

Mix 1/2 tsp salt, 2 tbsp lemon juice, 3-4 tbsp sugar syrup (sugar dissolved in water; thickened then cooled) into a jug.  Add approximately 750 ml of water and stir until dissolved.  Taste and add any of the aforementioned ingredients if necessary.  Once adjusted to taste, add 1 tsp of Rooh-Afza syrup.  You can find it at your local Asian food store.  It gives the lemonade its characteristic pink coloring and gives the taste a dash of exotic vibrancy.  The rose water in the syrup perfectly balances out the tartness of the lemons.  Serve in frosted glasses.  Makes approximately 3 tall glasses or 4 shorter ones

Toss 2 cups of chick-pea flour, 1/2 tsp salt, 1/8 tsp baking soda and 1/2 tsp chilli powder (paprika works too but the spicier the better) into a bowl.  Add approximately 1/2 cup water and mix until the product resembles pancake batter.  This may require a few more teaspoons of water to reach the required consistency.  The batter should not be liquidy, just soft enough to lump against the vegetables.

While Pakoras can be plain, they work best in my opinion with eggplant slices, potatoes, onions and various peppers (I prefer the spicier ones).  Chop 1 medium-sized eggplant (into squares), 1 medium-sized potato (into squares) and 1 medium-sized white onion (quarter rings).  Toss vegetables into chick pea batter and set aside.  Heat oil (vegetable/corn oil) in large-ish wok/container.  Add tablespoon-full drops of the batter mix into the heated oil and fry until they turn nice golden brown.  Drain on paper towel and serve with ketchup.  Eat piping hot!