The Muslim Silence on Gay Rights 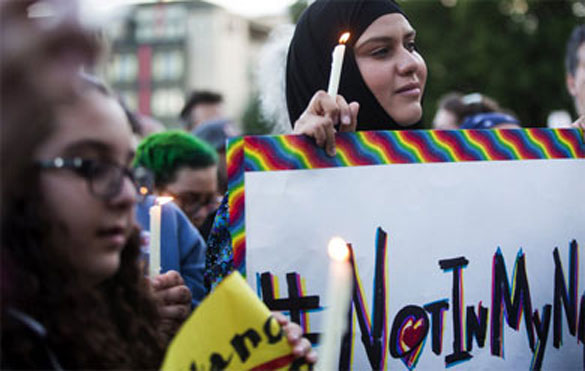 A vigil in Seattle honouring the victims of the shooting in Orlando, Fla. Credit Lindsey Wasson/The Seattle Times, via Associated Press

An Afghan-American Muslim walks into a gay club in Florida on Latin night during Pride Month. In my dreams, that is the beginning of another great story of remix, tolerance and coexistence that is possible only in America. In reality, it’s the start of a nightmare massacre fuelled by hatred and perpetrated by a man from a group already scarred by a generation of suspicion and surveillance.

Whether Omar Mateen was a militant fighter financed by the Islamic State, a self-radicalized extremist or a lone wolf psychopath with a gun license, the distinction for committing the worst mass shooting in our history now belongs to an American Muslim.

After the attacks in Orlando early Sunday morning, many of my American Muslim friends began posting messages on Facebook about how frustrating it felt to go from the affirming images of the late Muhammad Ali to news of yet another terrorist attack. “He doesn’t represent us,” many wrote. “He can’t call himself a Muslim.” For many American Muslims, this kind of immediate condemnation and social media activism has become the first step in our symbiotic relationship with the news cycle. As the history of fellow minorities has taught us, retaliatory violence, exclusion and even internment are always possible in the American family and it’s best to try to get ahead of the curve.

But in this moment of hashtag solidarity, I hope we can also have some tough conversations about our limits. Accompanying those posts, I saw many gestures of solidarity and sympathy for the L.G.B.T. community. But behind those posts is a history of silence on gay rights.

For eight years, I was an editor and producer for NPR’s “All Things Considered.” It seemed as if each week featured an example of “Muslim” violence and with it an opportunity to bring more nuanced perspectives and context to the discussion. Through highlighting the voices of Muslim reformists and liberals, I felt optimistic about a generation that could bridge our widening divisions. But in my personal life, I was struggling in isolation with how to reconcile my own faith with my sexuality.

When I was growing up, there were no Muslim role models or blueprints for taking a different path to love. When it came to the breakthroughs for gay rights in the Obama era, even progressive Muslims were mostly ambivalent. An open letter by the religious scholar Reza Aslan and the comedian Hasan Minhaj supporting same-sex marriage prompted handwringing and arguments in my newsfeed. “Islam teaches us to be accepting but it is best for homosexuals to be celibate. What is wrong is wrong,” someone wrote.

For so many in the Muslim community, “traditional” marriage is a tenet of faith. Weddings, engagement parties and family picnics constitute our safe spaces. Although we’ve shared political goals like the protection of civil rights with L.G.B.T. activists in this age of terrorism, ours is not a natural or a deep alliance. More important, queer Muslims are marginalized if not simply invisible. In light of this weekend’s attacks, we can no longer afford this kind of superficial engagement.

No religion has a monopoly on homophobia. The track record of exclusion and outright abuse of gay men and women in the name of God is a depressing reality across faiths. But we cannot use those analogies to excuse our own shortcomings. Omar Mateen went on a rampage at a gay club out of hatred he attributed to his faith. He shot and massacred Americans for thriving in their safe space, for being among those they love and were loved by, and he did it during both Ramadan and a Pride Month that epitomizes self-love in the face of hate. The toxic cocktail of gun violence, unchecked mental illness and deranged ideology that propelled the massacre at Pulse is a threat to all Americans.

We must stand up against the anti-Muslim responses that come so easily in this current political climate. But for Muslims, this is also a moment to reflect more deeply on how we feel about living in a country where gay rights are central, where marriage equality is real and coexistence is the only way forward.

As I look at his narcissistic selfies and brooding poses on the cable news loop, I don’t know if Omar Mateen was mentally ill or just emotionally unhinged. I don’t know if it was the sight of two gay men kissing that infuriated him to the point of massacre. What I do know is that there will be more dark days to come if we don’t build the psychological, political and spiritual space within our communities to embrace the remixes that are possible only in this country.

Bilal Qureshi is a former editor and producer for NPR’s “All Things Considered.”