Why Are Matters Of Faith Beyond Discussion?

As I was leaving for Britain for the first time, many years ago, one of the Imams that I had held various discussions with, advised me:

“Beta there is a class of people who do not believe in any god. Do not hold a discussion with them, ever!”

Maulvi sahib explained his rationale: “Because they can potentially diminish your faith with their illogical and audacious questions.” 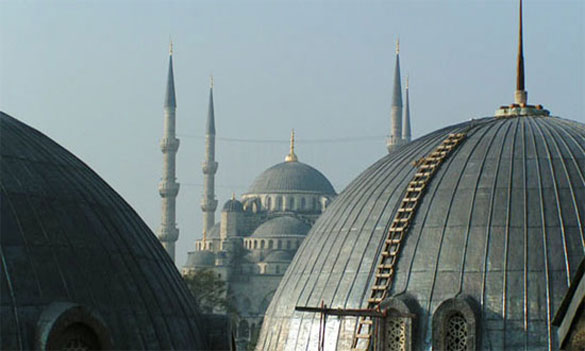 Lack of discourse has resulted in most practicing Muslims in our part of the world becoming ignorant to the very ethos of religion. - File photo

To that I couldn't help but retort: “Are you so uncertain of the strength of my faith? What if I were able to endow a better understanding of Islam upon them and thus bring them a notch closer to my own religion?”

Maulvi sahib did not have an answer. I took that as a sign that he had understood the logical fallacy in his argument.

Thereafter, I spent years abroad, and had countless arguments with my ‘atheist friends’, returning a ‘Ghazi’ nevertheless.

The apprehension of the Imam Sahib however, was not a sole occurrence. This dilemma prevails within Muslims by and large.

Take for instance the much derided Satanic Verses by Rushdie — whose venom was testified to by Ayatollah of Iran — alleging that it had the potential to damage the faith of Muslim society.

I had the fortune (or misfortune rather, given its opaque metaphors and stale story line), to read the book.

Guess what; I am still as much a Muslim as I was before reading the book.

In the same vein, one of the fundamental lessons debaters are taught is that there are two ways of polishing an argument: looking at it from eleven different angles, or holding the same discussion at eleven different instances.

By the end of it, one is left with the bare truth which can be discussed, argued or defended at any platform. Conviction of one's arguments comes as an accompanying advantage.

Herein lies the critical problem ailing Muslim society – we are afraid of discourse; frightened that our faith may desert us; terrified that we may become influenced by the rhetoric, ‘emanating from other quarters’.

It is invariably this refusal to indulge in discussion which prevents us from becoming more reasonable in our own arguments.

This has resulted in most practicing Muslims in our part of the world becoming ignorant to the very ethos of religion. Principles are sacrificed for the sake of literal interpretations; pride and ego remain high despite the uncovering of ankles; the beard is guarded but modesty is not; and ablution is performed five times a day but the streets are 'religiously' littered with rubbish.

I have had the chance to make acquaintance of at least three Europeans who converted to Islam in the recent years, after they did their own fair amount of research. Let me assure you, they are far better at following the principles of Islam than most born-Muslims, who consider themselves entitled to all the blessings of the world for their faith despite knowing virtually nothing about it.

Bear in mind, the lack of discussion does not just breed ignorant Muslims; it also gives birth to a violent class as well.

If Islam were a religion of mindless compliance, it would not have emphasised discernment so much; the concept of Ijtihad, is the idea of Muslims being an enlightened nation, aware of the teachings they are expected to follow and the rationale behind each.

The following verse of Iqbal acknowledges faith as being beyond the understandable, but still implies that faith is a journey that has to be traversed through reason.

[Translation: Move on and beyond reason, for reason is the torch for this journey but not the destination.]

One is compelled into reiterating the same point ever so often: A more modern approach to the understanding of religion needs to be undertaken. Aversion to discussion should be shunned, even on topics as controversial as blasphemy laws.

A progressive society can well defend its ideologies; a regressive one is reduced to the annals of history.

The choice is ours.

Badar Iqbal is a lawyer. He holds a law degree from BPP University, UK and an engineering degree in Electronic and Communications from Cardiff University. He writes intermittently for various national and international publications.