Muslims Have Saved ‘Secularism’ in West Bengal; But is it the Way Forward?

Despite Voting Overwhelmingly For The TMC, Their Political Representation Will Go Down

1.    It is the concentrated Muslim vote which proved decisive for Mamta Banerjee.

2.    The Indian Secular Front, by positioning the TMC as the bigger threat, completely misread the Muslim mood in the state and failed to make even a faint mark.

3.    Now that the threat of BJP of subsided, Muslims need to think long and hard, if this is the correct path which will lead to their empowerment.

The resounding success of Mamata Banerjee’s Trinamool Congress in the recent West Bengal elections is well deserved. The election saw very tough challenge by the BJP whose entire central leadership was campaigning in the state. In the middle of a pandemic, the BJP leadership made this election into a prestige issue. For the Hindu nationalist party, a win in West Bengal was also an ideological question. After all, the state was the harbinger of Hindu nationalism before the idea migrated to Maharashtra. Despite such ideological antecedents, West Bengal only had a negligible presence of the BJP.

The satisfaction of getting back what was originally theirs was perhaps the important motivation behind the forceful campaign that the BJP launched. They failed to achieve that goal but winning around 80 seats will make them a formidable force in the state. As such, any analysis claiming that West Bengal has rejected the BJP is only partially true. Given the number of seats it has got; it is beyond doubt that large sections of Bengalis now see the BJP as a credible and legitimate alternative. And that is no mean achievement for a party which, till recently, was just a blip on the electoral map of West Bengal.

Although not openly, but senior members of the BJP are blaming Muslims for its loss. Rakesh Sinha tweeted that Muslims have exercised a veto on electoral politics in West Bengal and that it will be ominous for secular democracy. This is rather rich coming from a party which has for the most part of its history, been trying to delegitimize the notion of secularism itself. Moreover, after attacking Muslims in every conceivable way and making them potentially insecure in their own country, was the BJP expecting Muslims to remain neutral?

Despite claims to the contrary, the BJP ran a deeply polarizing campaign. In places of Muslim concentration like Nandigram, they proclaimed that if not voted into power, such areas will turn into mini-Pakistan. The party anyways has cultivated an anti-Muslim image throughout the country and its communal rhetoric added to already existing anxieties amongst Muslims. This insecurity and the fear of BJP coming to power impelled Muslims to come out and cast their votes in favour of the ruling TMC in large numbers.

While the TMC has got votes from all over Bengal (barring the northern most region) and from all sections of the populace, it cannot be overstated that the Muslim vote proved decisive in its victory. Muslims are a little over 30 percent of the population and it appears nearly 90 percent of their votes went to Mamata Banerjee. For any party getting that much of concentrated votes, it would definitely translate as a major victory if it gets some percentage of votes from other quarters. 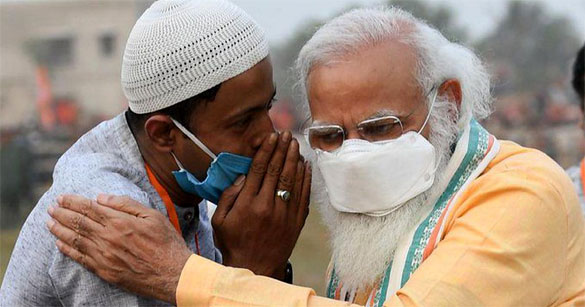 For the first time in West Bengal, there was a Muslim political front, the Indian Secular Front (ISF), led by the Furfura cleric Abbas Siddiqui, that was seeking votes primarily from Muslim constituencies. In alliance with the Left and Congress, it has done extremely badly. It is clear that Muslims have rejected this political formation in favour of the TMC. Even in the traditional bastions of the Congress, Muslims have overwhelmingly voted in favour of Mamata Banerjee. One was expecting that the ISF might be able to get some seats but then it seems that it failed in capturing the imagination of Muslim voters.

This is not surprising given the fact that Muslim consciousness remains a dominated one and it will take years of political work amongst them so that they realize their own political strength. Moreover, the threat of the BJP with regard to Muslim identity is perceived to be a very real one and Muslims should not be blamed if they sided completely with the TMC. The ISF campaign, which targeted the TMC more than the BJP, was extremely unwise and seems to have backfired. For Muslims, the BJP remains a potent threat and they would have no argument over it. In order to remain relevant, the ISF will have to rethink its political strategy.

The ISF also needs to think if its alliance with the Left really brought it any benefits. It appears that the Left cadres have decisively shifted towards the BJP which has led to its rout. One explanation for this shift which has been consistently given since the 2019 parliamentary elections is that the BJP is in a position to give protection to Left cadres from the very real possibility of being killed by TMC activists. This argument is bogus for the simple reason that it does not take into account the specific Hindu interests that the Left in West Bengal was protecting. If it was really a question of survival, then the Left cadres should have joined the ruling TMC which was in a better position to protect them. Joining the BJP is not just a question of survival but an ideological coming out in the open for these cadres. They have chosen the BJP because they believe that this party will put Muslims in their ‘right place’. And they did not choose the TMC because they were convinced that Mamata was doing ‘too much’ for Muslims.

Perceptions and reality hardly match. Despite the hype and hoopla that the TMC was favoring Muslims, the representation of the community across the state services remains low. There has been a marginal increase in terms of representation but that has more to do with processes internal to the community rather than any express policy level initiative.

In this election, Mamata Banerjee has got the highest ever percentage of Muslim votes, but the share of Muslim MLAs would actually decrease in the West Bengal assembly. And this has happened because the TMC made a conscious decision not to be seen as pro-minority and hence did not give adequate tickets to Muslims. Muslims have ‘saved’ secularism in West Bengal but at the cost of reducing their own political representation. They need to think long and hard if this is really the path which will lead to their empowerment.