Quran And Hadees On Friendship and Backbiting In Islam

Friendship, Be It On Individual Or National Level, Is A Very Intimate Relationship Wrapped In Divinity

2.    Amidst the mad race of materialistic gains, the world has left spirituality behind.

3.    The greatness of a true friend has not died down.

4.    The ‘Maula’ of the believers is a true companion, the truest friend and ‘a protecting master’

5.    True friends and the values of friendship has not died down.

Amidst the mad race of materialistic gains, the world has left spirituality behind. In the race of scientific achievements, spiritual achievements have been forgotten. Our religious leaders and spiritual masters, of almost every region of the world, have given us their priceless advice that they acquired after years of untiring researches through meditation and following the righteous path shown by God and His apostles.

Friendship is a very intimate relationship wrapped in love and care for each other, be whatever reason it may. Everyone wishes to have true friends. Some of us also boast of having true friends but the myth of friendship breaks when need to help them, in a serious crisis like the present one arises. Individual friends do not answer the call of distress of a friend and the friendly nations play politics with their sworn friends.

But true friends and the values of friendship have not died down. There are many we never knew of or never considered our friend are untiringly committing themselves to dangers but helping others.

Today’s is a gloomy situation. But it is not worth being hopeless as God always sends help from the unknown quarters as He is that even doing today. Consider the following Saying and distinguish between a true and a false friend. The commander of the faithful; Imam Ali (AS) says:

'A friend can not be considered as a friend until he is tested on three occasions; the time of need, behind your back and until after your death

In the light of the above mentioned saying the world can test at least the ones who are coming forward at the time of need and learn to distinguish between a good and a hypocrite friend.

Once you are deceived and are fallen, there will be no use in regretting your friendship with people of evil designs. The following Ayat of the Noble Quran says:

“Close friends, that Day, will be enemies to each other, except for the righteous.” (Az-Zukhruf, 43:67)

“Your best friend is the one who: seeing him reminds you of Allah, speaking to him increases your knowledge, and his actions remind you of the hereafter.” (Al-Muhasibi)

“Try to have as many as possible true friends, for they are the supplies in joy and the shelters in misfortunes.” (Bihar-ul-Anwar)

“If you wish to mention the faults of your friend, mention your own faults first.” (Bukhari)

The last of the above mentioned Ahadees is the one we must not forget to bring it in our everyday life. It asks to advise your friends when there is no one except you two so that no one listens to you and your friend’s weakness does not come into the knowledge of others. And more than that we should mention our faults before mentioning others. In the same vein consider the following saying from Imam Hassan Askari (R.A). He says:

In the following Hadees, narrated by Abu Musa (RA), we find a parable on friendship that is an eye-opener. Allah’s Messenger Prophet Muhammad (SAW) says:

“The example of a good pious companion and an evil one is that of a person carrying musk and another blowing a pair of bellows. The one who is carrying musk will either give you some perfume as a present, or you will buy some from him, or you will get a good smell from him, but the one who is blowing a pair of bellows will either burn your clothes or you will get a bad smell from him”. Sahih al-Bukhari Book 72, Hadith 60

“Try to have as many as possible true friends, for they are the supplies in joy and the shelters in misfortunes” Mahdi as-Sadr, The Ahlul-Bayt; Ethical role models, P. 290.

The human being is advised to have as many friends as he can but they have to be virtuous, the carriers of musk who could be a shelter in the times of misfortune and a reason of joy.

Allah, the Most Merciful as a Friend

Is Allah, the Almighty our friends? Yes, He is our true friend but not in the wordy sense as we consider our friends to be equal to us, in one way or the other, that God certainly is not. God is our friend as being omnipresent He is always there for our help in need, whenever and wherever it is needed. Allah is our protector, in that sense He is our friend. Allah, the Most Merciful says in the Holy Quran:

Allah, the Almighty is ‘the All Knower’. He knows what circumstances His creation is passing through and He is always there as ‘a a protector’ so we must pray for His help and rescue and cure from all kinds of diseases that befallen us. 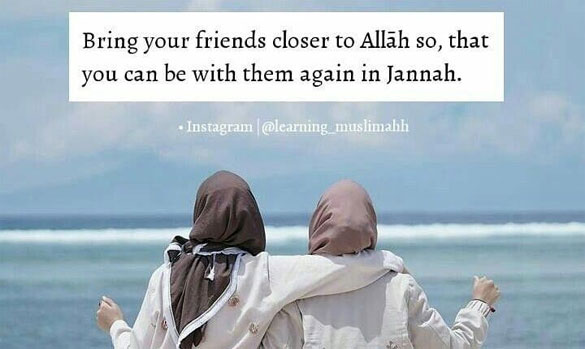 The world is not devoid of divine powers and spiritual learning if we tend to pursue them. Taking guidance from the spiritual leaders of the past on the happenings of the present times will be useful in understanding the circumstances we face in our day to day social, political, psychological and economic life. The human being is fortunate to have so many divine and spiritual guides in the form of their sayings and books and hence it must understand their worth and use them for the benefit of this chaotic world that we have designed from our mistakes. All of them are well-wishers so all of them are our friends, true friends. They know when to encourage us in our endeavours of making our lives better and when to discourage us from taking wrong decisions.

The human being should know that the identity of a true friend is that it takes us closer to humanity, brotherhood and knowledgeable society.