Madrasa Educated TV Mullahs Act Their Parts Of Playing The Role Of Defenders Of Islam And Indian Muslims, But In Fact, Do Much Harm To The Community By  Exacerbating Hindu-Muslim Relations, Providing Rwanda-Style TV Anchors With Opportunities To Paint All Muslims As Anti-National And Islam As A Religion Of Hatred And Aggression

3.    Students of religious institutions are supposed to spread the humane and spiritual messages of the religion they belong to.

4.    India has brought up scholars and Sufis of repute of various religions.

5.    Students of all the religious institutions are supposed to spread the humane and spiritual messages of the religion they belong to. 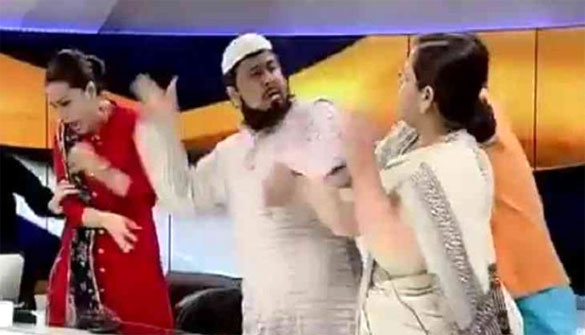 Mufti Ejaz Arshad Qasmi getting into a heated verbal debate with Farah Faiz on Zee Hindustan channel, as people around them get up to intervene. (Source: Zee Hindustan/Twitter)

The Holy Quran, the Holy Bible, the Holy Ramayana, the Gita as well as all other religious books and scriptures, have failed to awaken spiritual essence and humane ethics in the twenty-first-century human being. People all over the world are customarily taking the oath of allegiance, honesty, brotherhood and inclusivity before taking on constitutional posts and wherever is it needed to break it at the first instance.

Students of religious institutions are supposed to spread the humane and spiritual messages of the religion they belong to. Allegiance with the morality of self and the society of such students is understood as they are supposed to be the flag-bearers of the concerned religion. Society takes pain to support their educational needs by charity, Zakat and Fitrah taking it as a religious act and Sawab e Jariah (continuous reward) in here and hereafter instead of providing infrastructural opportunities to the kids for skill training that could support them and their families with food and clothes. Looking at the madrasa educated people’s behaviour it looks that the madrasas with religious educations should be run only up to teaching the Holy Quran so that they could learn the basics of the religion. Providing scholarly education is going to waste.

Madrasa educated men’s irreligious and unethical behaviour has become a new normal. These scholars of the madrasa are seen selling their Imaan for a pittance on news channels. They are paid Rupees 2000 to Rupees 5000 per debate for helping the Islamophobic channels spreading hate against the Indian Muslims in general and Islam in particular.

In India people with long beards, Islamic caps, and white and green turbans are a regular feature on the Indian news channels, which are best known for making journalism a farce and journalists an item of a drama sequence. For a long time now, it is normal to see an anchor, two or three debaters from different political parties, one supposed to be neutral and one Muslim taking part in prime time TV debates on irrelevant topics. The topics are loathed with the possibility of being turned into a religious debate perfect for hate-mongering. These debates are worse than the third-grade drama serials where there is one anchor (Sutradhar in dramatic parlance) to encourage all the debaters to abuse Islam and Muslims roaring on the Maulvi debater to accept all the crimes that Indian Muslims never did. Maulvi debaters also present themselves as if they are defending the perpetrator of the crime. Many such debates were held on Love Jihad, Triple Talaq, Cow slaughtering, Pulwama, Surgical Strike and UPSC Jihad. Various TV news channels became a part of hate-mongering daily during the first phase of the pandemic Covid-19 when the Tablighis and Nezamuddin Markaz of the Tabligh were on target. 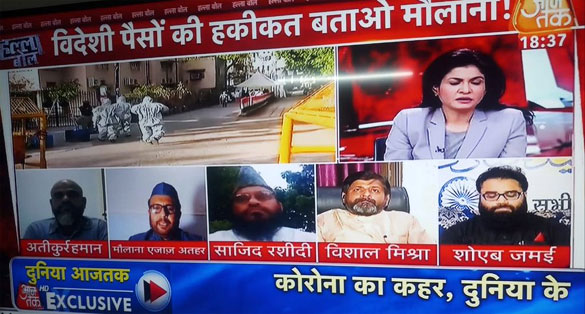 These Madrasa educated TV mullahs act their parts of playing the role of defenders of Islam and Indian Muslims, but in fact, do much harm to the community by  exacerbating Hindu-Muslim relations, providing Rwanda-style TV anchors with opportunities to paint all Muslims as anti-national and Islam as a religion of hatred and aggression. Their participation in such highly hateful debates showed Islam and Muslims in a very bad light.  These Maulvi debaters could have kept Islamic essence on the topics concerned but they were not paid to show Islam and Muslims in bright light so they acted well by showing themselves defending the culprits, who were the victims. Thus, the pseudo-Maulvis helped spread Islamophobia and enmity between the Muslims and all others.

These innocuous-looking creatures (Indian Muslim TV Warriors) are seen in various government-sponsored programs on the platforms with well-known anti-Muslim political leaders.  On such political platforms, they never lose an opportunity to be photographed with them. 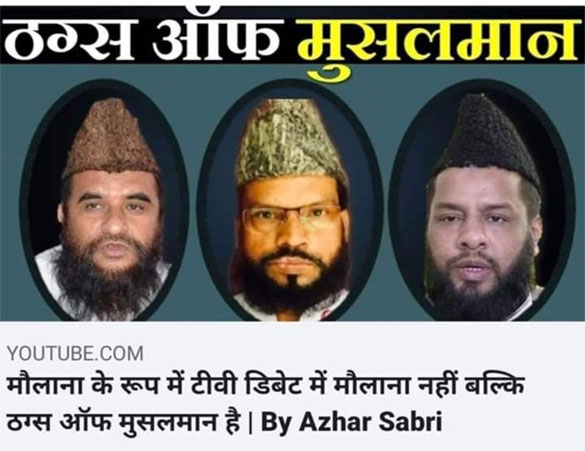 It is not that they do not know they are speaking against the spirit of what they have been taught in Madrasas or what they are teaching as a Maulvi to their students. But they do not do so because they are not paid to debate and keep their points from the Islamic perspective but to deliberately debate in a way that shows Muslims in a bad light. For such people Allah the All-Knower says in the Holy Qur’an that they are the worst hypocrites and their punishment hereafter has to be very painful.

India has been and still is an abode of highly respected Quran exegesis, Islamic scholars of Prophetic traditions, Sharia laws and rules of Deen. These scholars need to come forward and teach such people to beware of Allah’s punishment for those who abuse Islam and its divine teachings.

Quranic Verses Demeaning Those Who Speak Without Knowledge

And to be firm and patient, in pain (or suffering) and adversity, And throughout all periods of panic. Such are the people of truth, the God-fearing. - (Al-Baqarah: 177)

O you who have believed, if there comes to you a disobedient one with information, investigate, lest you harm a people out of ignorance and become, over what you have done, regretful. - (Al-Hujurat: 6)

“And pursue not that of which thou hast no knowledge, for every act of hearing, or of seeing or of (feeling in) the heart will be enquired into” - (Al-Isra`: 36)

Lo! Those who love that slander should be spread concerning those who believe, theirs will be a painful punishment in the world and the Hereafter. Allah knoweth. Ye know not. - (al-Nur: 19)

The Prophetic Traditions on People Who Support Wrong Statements

The Prophet Pbuh warns; “Whoever bears a witness against a Muslim of which he does not deserve, let him prepare for himself a place in the Hellfire”

Prophet Pbuh says; “This evil is enough for a man that he degrades his Muslim brother”

Prophet Pbuh is reported to have said, “The goodness of Islam of a believer is to leave which does not concern him” 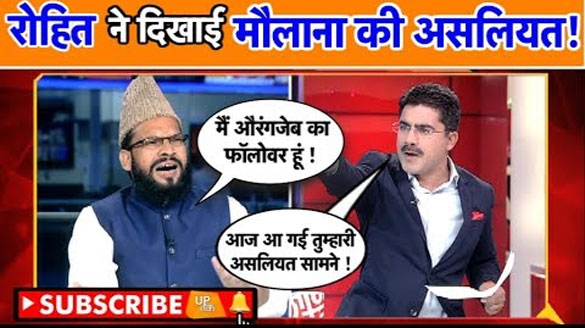 Following is what Nasim Akhtar, ex-professor King Abdul Aziz University, Jeddah has to say about the Muslim TV warriors:

‘By participating in air-conditioned studio discussion, they (Muslim TV warriors) wittingly or unwittingly help in promoting the agenda of RSS and BJP. How and why? As the TV channels always call half-baked Maulvis who don’t have a glib tongue and good knowledge of the subject. They don’t go prepared. Perhaps they don’t even ask about the topic of the debate to prepare themselves accordingly. Several times it has surfaced that they were invited for something else and when you go there you find the topic changed, said Nasim Akhtar, ex-professor King Abdul Aziz University, Jeddah. (Siasat: 1st June 2019)