Islam Asks its Followers to Acquire Knowledge for Peace and Enlightenment, Not Sectarian Bigotry

1.    Islam advocates acquisition of Knowledge that creates awareness of the world, inhabiting the creations of God.

2.    Muslims engaged in religious studies are not acquiring comprehensive knowledge of scriptures along the lines of Truth and Justice.

3.    The education imparted to the madrasa students is turning them into a robots defending the sectarian thoughts imprinted on their minds.

Knowledge creates awareness of the world, which inhabits the multitudinous creations of God. Knowledge leads to a peaceful society where there is no negative thinking, hatred or jealousy against any creation of God. Knowledge creates an awareness that teaches us the psychology of the inhabitants of the world. The truly educated let no ill will come near them for anything or anyone, rather we study and know the reasons behind the negativity of a person. Therefore, acquiring knowledge should be the foremost objective of a person.

Islam as a Religion of Knowledge

Both learning and teaching (spreading the knowledge that one has acquired) is given importance in Islam. Islamic scriptures are full of Ayaat of Quran and Ahadees that preach and encourage human beings to acquire knowledge, wherever they can get it. Islam also emphasises the personal and social benefits of spreading the acquired knowledge among the creations of Allah, the Most Benevolent.

The very first Ayat of the Quran, ‘Read! In the Name of your Lord Who has created (all that exists) (Qur’an, 96:1-5)’ revealed on Rahmatul Lil Alameen, Prophet Muhammad (SAW) highlights the importance of acquiring knowledge. The revelation of the Holy Quran starts with the word ‘read.’ It could have been any other word that is used while addressing the Prophet (SAW) in the Quran later on. But Allah, the Almighty knows the best and so He revealed ‘read’ as the opening word of the Holy Quran that signifies the value of knowledge in establishing a world where there is no hatred, jealousy or any kind of superiority complex. Quran and Hadees lay preference on the acquisition of knowledge for it is the root of a benevolent, kind and brotherly world. 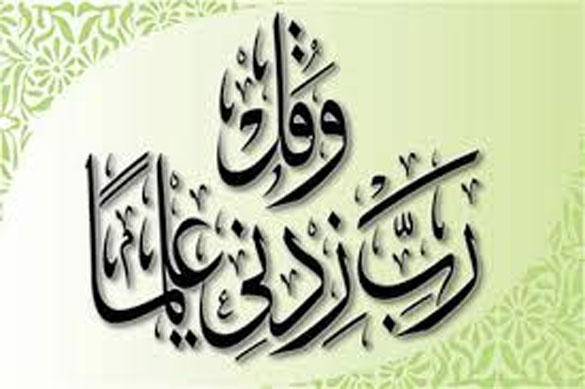 Consider the following Ayat that is a supplication in front of Allah, the Most Benevolent asking to increase knowledge.

The above-mentioned Ayat of Quran and narrations of Hadees are proof of Islam being a religion of knowledge where believers are encouraged to acquire knowledge which is the basic root of understanding Allah, His Prophet Muhammad (SAW) and in the process all the secrets of nature that carries a hidden wealth of scientific knowledge that are the cure of various kinds of epidemics and pandemics, and mental and physical diseases.

Allah says in the following verse that He will exalt the status of the people who have acquired knowledge and those who take the righteous path.

“Allah will exalt in degree those of you who believe, and those who have been granted knowledge.” (Qur’an, 58:11)

Allah, the Most Merciful keeps the men of letters close to Him. He asks them to bear witness of His Oneness

The following two verses say that a literate and an illiterate cannot be of equal stature and that only an educated person can understand things. He says the person who can see and a blind person cannot be equal:

.... Say, “Can those who know and those who do not know become equal?” It is only the people of understanding who are receptive of the advice (Surah Az-Zumar - Verse: 9) Mufti Taqi Usmani

Taking the present-day madrasa educated scholars into account, in the light of their actions and reaction on the social issues confronting the community where Muslims are more under attack by their brothers in religion, it can be easily understood that their acquisition of knowledge is not on the line of truth and justice. Today’s Muslims are speaking not for the sake of truth based on their knowledge but to defend the school of thoughts they represent. The education imparted to them is turning them into a defending machine of the sectarian thoughts imprinted in their minds.

Allah, the Ghafurur Raheem warns such Muslims (and the people at large) against speaking without knowing in the following verse:

Reading the Holy Quran and the books of Ahadees without understanding its soul is not gaining knowledge, especially so for those whose mother tongue is not Arabic. The Holy Quran is in classical Arabic language and the time and occasions of the Ayats and the context of the actions of Prophet Muhammad (SAW) (Ahadees) is very different from the environment we are living in today. Therefore, the teachers (Mudarreseen) of madrasas will do better to not let their wards study on a particular sectarian line of thought but the pure teachings of Allah and His Apostle. If Muslims are knowledgeable, they will solve their problems by understanding the facts being kept in front of them by their brothers from their perspective.

The Holy Quran says that every human being has to think and then speak. Thus, in the light of the Holy Quran, it can be said that the believers have to have a sense of acquiring true knowledge and reflecting on the things that come under their knowledge.

The countries having invested in thinking (research) and acquiring knowledge on a priority basis are called developed nations today. They have done revolutionary research works for the benefit of society. Islam is not strange to the research world. Muslim scientist and scholars have also done revolutionary work in various fields before they fell prey to theological sectarianism and got divided into sects.

Today’s Muslims can also follow the righteous path of Allah and His Prophet Muhammad (SAW) and become a pioneer in the fields of life-affecting sciences. Considers some of the Ahadees that reflect the words of Allah.

“Whoever follows a path in the pursuit of knowledge, Allah will make a path to paradise easy for him.” (Al-Bukhari, Kitab Al-Ilm, 10)

Ibn Abbas (ra) narrated that the Messenger of Allah said:

In a Hadith Abu Darda(ra) narrated that I heard the Prophet of Allah (pbuh) saying:

The angels will lower their wings in their great pleasure with one who seeks knowledge, the inhabitants of the heavens and the Earth and the fish in the deep waters will ask forgiveness for the learned man. The superiority of the learned man over the devout is like that of the moon, on the night when it is full, over the rest of the stars. The learned are the heirs of the Prophets, and the Prophets leave neither dinar nor dirham, leaving only knowledge, and he who takes it takes an abundant portion.

Pursuit of knowledge is the pursuit of piety, honesty, love and brotherhood. We have to be true students of our conscience to learn the truth without leaning to any one side of the perspective.

Attainment of knowledge will make our religious perspectives clear and we will be able to shed any prejudices we are living with.  The world is a village. We all live together. We will have to understand each other in the light of the teachings of the Holy Quran and Ahadees.