The Fatwas That Can Change Pakistan's Blasphemy Narrative: The Ahl-e-Hadith Challenge the Hanafi Position on Blasphemy - Part 2

This article is the second in a five-part series on the untold story of Pakistan’s blasphemy law. Read the first part here.

Pakistan's blasphemy law continues to sustain popularity and credence, with death being considered not only the most appropriate retribution for offenders, but the only one. This ideology is embraced most wholeheartedly when it comes to non-Muslims charged with blasphemy.

In my previous article when I spoke of the authentic Hanafi position on the permissibility of pardon for all blasphemers (Muslims and non-Muslims), the overwhelming response supported such a pardon for the likes of Junaid Jamshed (a ‘fellow Muslim brother who had offended some by mistake’) but held that the same principle of pardon could not be extended to non-Muslim offenders such as Asia Bibi.

This is largely reflective of the predominant public narrative on blasphemy.

Those who dissent – who speak of pardon and of waiving the death penalty, particularly for non-Muslims – are seen to be speaking from borrowed western ideologies or from a faith deemed too weak to be seen as a credible authority for the public. This has made it convenient for citizens to largely ignore those who plead for clemency, reducing these voices to a small, ineffective and irrelevant force, at best.

There was a time when this was not so – in fact, at one point, the most revered ulema(religious scholars) of South Asia had rallied together to defend the position that non-Muslims could not be awarded the death penalty for blaspheming.

This occurred in the late 19th century, when the South Asian ulema (the overwhelming majority of whom belonged to the Hanafi school of thought) were under ideological attack from the Ahl-e-Hadith.

The Ahl-i-Hadith originated as a movement influenced (and later funded) by the Wahhabis of the Arabian Peninsula. This movement challenged the established Hanafi rulings on various issues, including blasphemy, alleging that these were based on opinion (ra`y) and Greek influenced analogy-driven reasoning (Qiyas), rather than on prophetic tradition (Ahadith).

In particular, they took exception to what they perceived as Hanafi lenience towards non-Muslims blasphemers (i.e. not prescribing a fixed death penalty and the provision for pardon) which they viewed as incompatible with Ahadith.

The exact position of Abu Hanifa (the founder of Hanafi School) that ends up being a source of contention for the Ahl-i-Hadith.

These criticisms roused the Hanafi ulema to an impassioned rebuttal.

Many of them targeted the Ahl-e-Hadith from within their own framework, deconstructing several Ahadith that formed the basis of these criticisms.

One such example is a monumental, 21-volume commentary, the I’ll al-Sunan (the exaltation of the normative practices [of the Prophet]) by Maulana Zafar Ahmad ‘Uthmani, aiming to demonstrate, against the charges of the Ahl-i-Hadith, that the legal doctrines of the Hanafi school were in fact solidly based in traditions of the Prophet (PBUH).

Despite monolithic individual efforts of such stature, the most profound and relevant in terms of blasphemy, in my view, was Fath Al Mubeen Tanbeeh Al Wahabin (an explicit victory and a warning against the Wahhabis).

This contains a fatwa (see below) that clearly states that a non-Muslim blasphemer cannot be killed unless he/she is habitual in the offense.

This last part is an important qualifier because it differentiates single acts of blasphemy from multiple and deliberate attempts, in fact from what is considered politically rebellious blasphemy. 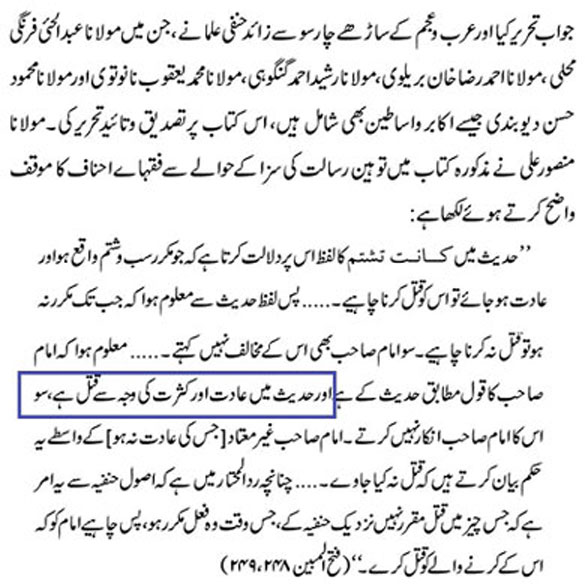 The monumental fatwa endorsed by 450 scholars that shows that killing is not permissible unless Adat (habituality) and Kasrat (high frequency) of offenses are established.

The Ahl-e-Hadith, in challenging the Hanafi position on blasphemy presented a compilation of Ahadith which supposedly showed that blasphemous offenders (including non-Muslims) were in fact killed, and that therefore the Hanafi ruling was erroneous in this regard.

In the rebuttal, the fatwa pointed to an important flaw in the Ahle-Hadith argument — that the Ahadith thus presented all pertained to cases of repeat or habitual offenders.

There is not a single case where a non-Muslim was ever killed for committing a singular offense of blasphemy.

(Further, according to Imam Abu Hanifa, the death penalty is awarded in cases where it is categorised as Siyasa (political) punishment, as opposed to Sharia (divine) punishment, against elements openly rebelling against the Islamic state, using habitual blasphemy as a tool).

This legal position was approved and signed by no less than 450 of the most prestigious names in the Hanafi ulema, not just from South Asia, but around the world.

It is difficult to come up with a case study of a bigger systematic consensus (ijma) than this one. Hundreds of leading ulema of their time from South Asia have declared that non-Muslims cannot be killed for a single offense for blasphemy and their pardon is acceptable unless it becomes a habitual and high frequency offense.

But to really appreciate the magnitude of this ruling for a country like Pakistan, we must look to some of the key signatories of this stance — one of them being Ahmed Raza Khan Barelvi.

Many readers might know that Ahmed Raza Khan Barelvi was the founder of the Barelvi school of thought, one of the two predominant Hanafi groups, and the religious orientation to which groups like Sunni Tehreek subscribe. The founder is considered a Pir, Saint and a most revered figure, amongst his followers, and the general populace.

Ironically, four years ago this month, Punjab Governor Salman Taseer was assassinated by Mumtaz Qadri, for pleading for pardon for Asia Bibi.

Mumtaz Qadri, who is a devout Barelvi, would be surprised, I am sure, to learn that the founder and most respected figure of his sect had endorsed pardon for non-Muslim blasphemers, and the view that non-Muslims cannot be killed for a single offense of blasphemy.

Incidentally, the co-founder of the other of the two Hanafi groups (Deoband), Mahmood Hassan Deobandi – also known as the Sheikh al Hind – is also a signatory on the above. 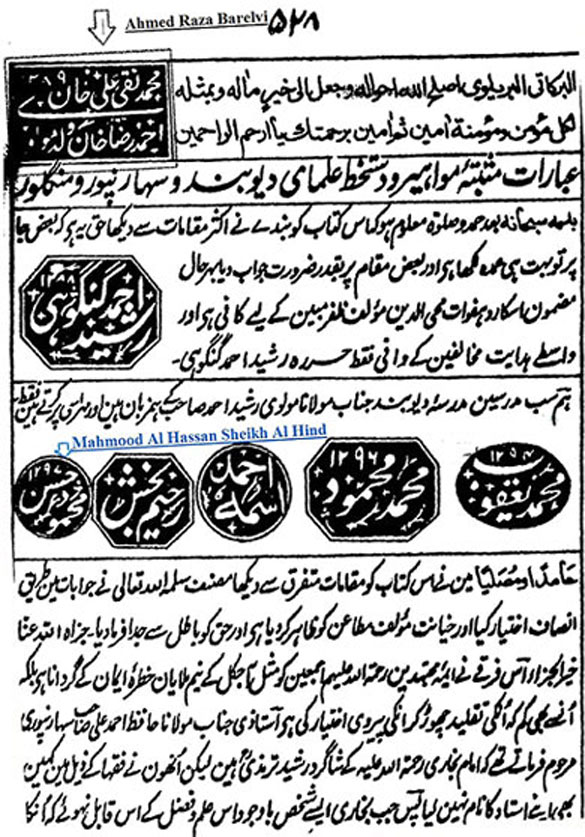 A partial list of signatories Fath al Mubin showing the endorsement of founder of Barelvi and Deobandi thought.

Both the founders of Deoband and Barelvi have endorsed the position that a non-Muslim cannot be killed for a single offense of blasphemy and therefore must be pardoned.

It is interesting to note that as per the Hanafi thought, we might be talking about no jail time/punishment for the first offense.

The Hanafi position clearly stating that first time offenders will only be warned, meaning that may not even be subjected to jail time.

Quite apart from this fatwa, there is another key scholar of immediate relevance in the minds and hearts of the nation who has echoed the same position as these revered names.

Maulana Maududi is a household name across the country and is the founder of Jamaat-e-Islami, one of the main religio-political parties in Pakistan.

Readers might be surprised to know that Maulana Maududi has also said that an act of blasphemy does not leave non-Muslims liable to capital punishment by the state.

The rights of Dhimmi (non-Muslims) living in a Muslim state include protection of his life even in instances of blasphemy as per Maulana Maududi.

All this nuanced handling of the issue is a far cry from the reality of its application today, where a single unfortunate, ill-informed, ill-judged alleged utterance can lead to a conviction under the law, and the death penalty.

Our law in letter and in its judicial interpretation prescribes a Hudd punishment for a single offense of blasphemy.

It makes no distinction between Muslims and non-Muslims repeat vs single offences, siyasavs Sharia punishment.

It goes against hundreds of top South Asian ulema and it goes against the founders of the predominant religio-political groups in Pakistan.

The idea that the current interpretation of this law is based on a complete consensus in the religious tradition is a myth.

This is especially crucial for those currently charged under the law, held in jail and fighting for their lives, as in the case of Asia Bibi.

She is not guilty of multiple offences of blasphemy.

She has begged for pardon multiple times.

According to the rulings of founder of Hanafi School, founder of Deoband thought, founder of Barelvi thought and the founder of Jamaat-e-Islami, Asia Bibi should be given a pardon.

What punishment then, would our clergy, our Mumtaz Qadris, and our vigilante mobs, like to prescribe for their revered religious figures, the founders of their sects and 450 of the most prestigious scholars in South Asia and around the world, for allowing pardon for non-Muslims?

The voices of these scholars are key for the change in narrative around the blasphemy law, opening space for conversation and debate, in building tolerance, in honouring the real voices of those who have dedicated their lives to studying these positions.

Most importantly, referencing these scholars ensures that no grave injustice occurs in the fair name of our Prophet (PBUH) — an act of devotion we sorely need.

Arafat Mazhar is the founder of Engage, an institution for research and reform of religious laws in Pakistan. His findings are being published in two prestigious international religious studies journals.