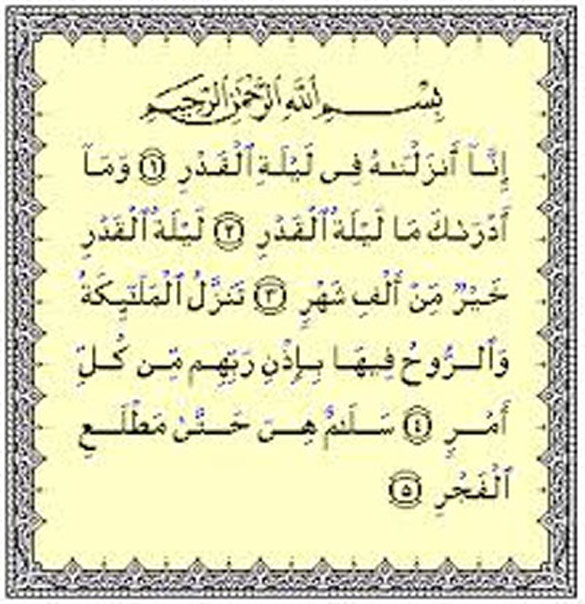 WE ARE about to enter the last 10 days of the holy month. Devout Muslims worldwide are prepared to embark on vigorous prayers and worship in all the remaining 10 days, beginning July 29, one of which is the Lailatul Quadr, or the Night of Decree or the Power Night.

The Qur’anic citation above clearly informs us of the importance of worshipping Allah on the night of Quadr. It is a night that every living Muslim wishes to stand before his Creator, supplicates Him, and seeks for better days ahead. Since Allah decrees whatever is ahead of his servants on that night, it is therefore apparent that whoever is fortunate to be alive on that night and be in prayers crying to Allah in submissiveness with sincere heart, and being repentant as well as remorseful of his sins, Allah would surely listen to him and decrees better life for him.

Because of the special nature and importance of this night, Allah has intentionally concealed the exact day from Muslims. This is because Allah in His inestimable wisdom wants people to strive in achieving something better in life. He has concealed the exact day of the Quadr night so that we may double our efforts in the whole month of Ramadan or at least in the last 10 days. The true believer will search for the night of Quadr at late night and in the early hours until he or she attains it, regardless of the hardship.

This "concealing methodology" adopted by Allah the Almighty in awarding the deserving Muslims on the Quadr night is indeed the best way of giving something worthwhile to the deserving person and denying the hypocritical and lackadaisical ones.

In a report by Al-Bukhari, the Messenger of Allah, Prophet Muhammad (peace be upon him) said; "Seek it (the Quadr Night) on the odd nights of the last 10 days of Ramadan." In another Hadith, the Prophet (peace be upon him) said, "Seek the night in the last 10 days, and if any of you is weak, or cannot observe it, he should not miss the remaining seven days. (Muslim) In fact, there are other authentic Hadiths on the Quadr night, and one basic point in all of them is that the ‘night’ is found in the last 10 days of Ramadan. Though, many Muslims have strong feeling that the night falls on the 27th day but since that is not for sure, Muslims should just have to attach extra attention to all the last 10 days without being selective so that they would be very convinced that the day is not missed out. It is recommended to seek the night and spend it diligently in devotion including night Sunnah prayers (Tahajjud), recitation of the Holy Qur’an and supplication. In a Hadith narrated by Abu Huraira, Prophet Muhammad (peace be upon him) said: "He who spends the night praying on the Quadr night as a sign of faith in Allah and seeking rewards from Allah, all his previous sins will be forgiven." (Al-Bukhari, Muslim)

Having known all the above bounties regarding the Quadr night, the question is "how prepared are we as Muslims in striving to find this night?"

Unfortunately, some Muslims do not live up to expectation during the last 10 days of Ramadan. They consider them as just ordinary nights without making any efforts to maximize their acts of worship during this divine period. Some Muslims are found during the last ashra spending time in unproductive activities and excessive socialization.

Some of the womenfolk are made to spend too much of their precious time in the kitchen cooking varieties of food instead of making them reserve energy and fully participate in prayer and worship. Also because Eid Al-Fitr (i.e. the festival to mark the end of fasting) is near, some Muslims engage in shopping while Muslim businessmen and traders and women like tailors, seamstresses, hairdressers, to mention a few, spend nights working to earn extra money and consider such times as their ‘bumper business season.’

Just like how businessmen, students and other professionals maximize their preparation and become more focused, vigilant and committed before and during their seasons, Muslims are expected to endeavour and put in more effort in the act of worship and prayer in all the days of the Ramadan month and more particularly in the last 10 days during which the Quadr night falls.

If we put in much efforts and pay serious attention on worldly achievements and pursuits which we may not live long to enjoy them, is it not more mandatory and befitting on ourselves as mortals who can leave this world anytime soon or later to focus on deeds that Allah has commanded us to do and which will be of everlasting benefit and pleasure for us in the next world where we would die no more?

Alhaji Ibrahim Yahaya is a senior English lecturer at British Academic Centre in the Kingdom of Saudi Arabia.