Islamic Cupping Methods Employed By Olympians as a Healing Technique 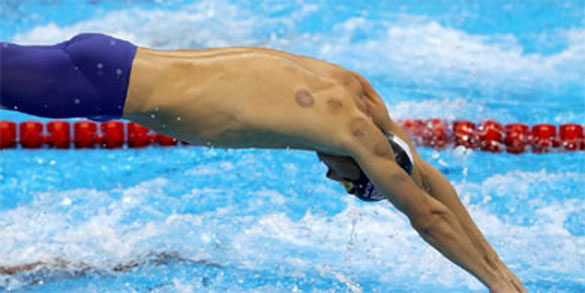 If you’ve been watching the Olympics, you may have seen some of the athletes with small, circular marks on their backs and shoulders, suggesting that they have been dabbling with an ancient healing technique called cupping, or ‘Hijama,’ literally meaning to ‘draw out’ in the Arabic language.

This technique dates back to the Greek, Chinese or Middle Eastern cultures and works by applying cups against the skin by creating a vacuum; it is created by heating the cup and then applying it to the skin and once it cools down, it contracts and draws the skin. Modern day versions use a mechanical suction pump to avoid having to heat the cup.

It seems as though this method of ‘dry cupping’ is the favoured amongst the athletes however, it is ‘wet cupping’ that seems to be a little more successful. It starts in cupping Hijama the same way, but when the cup is removed, small superficial skin incisions are made and a second suction is used to draw out a small quantity of blood.

It is believed that in doing so, the toxic or ‘bad blood’ is drawn out of the body, purifying the blood stream and promoting better circulation and faster healing of the body. Regardless of the method employed, the very action of suction is a way of stimulating the flow of energy and people like Alex Naddour, gymnast of Team USA favour it.

In an interview with USA Today, he shares that “cupping provides relief from the soreness and pounding that comes from gymnastics. That’s been the secret that I have had through this year that keeps me healthy.”

The entire process takes anywhere between 5-20 minutes and the marks will generally fade after a few days. Despite how painful it may look, the process is relatively painless and thousands swear that it helps them feel better afterwards, regardless of the ailment.

Similarly, millions of Muslims across the globe have long been subscribers of this healing technique as it has been recommended by Prophet Muhammad (peace be upon him and his family). In several instances, he has described is as “the best cure,” and the “best of remedies.” [Sahih Muslim]

Anas ibn Maalik reported that the Messenger (peace and blessings be upon him) said, “Indeed the best of remedies you have is cupping (Hijama)…” [Sahih Bukhari]

Further to this, it has been widely described in ‘Tibb al A’imma,’ a book on Islamic Medical Wisdom drawn from the teachings of the Ahlulbayt (as). The Imams themselves have mentioned the importance of it; Imam Al-Baqir (as) has said that “The Messenger of Allah (pbuh) never complained of any pain except that he sought refuge in cupping (al-Hijama).” [Bihar al-Anwar, vol. 17, p.33]